1930s child actor Dickie Moore, whose 100+ movie career ranged from Our Gang shorts to playing opposite the likes of Marlene Dietrich, Barbara Stanwyck, Gary Cooper, and Shirley Temple, died in Connecticut on Sept. 7, ’15 – five days before his 90th birthday.[1]

So far, news reports haven’t specified the cause of death. According to a 2013 Boston Phoenix article about Moore’s wife, MGM musical star Jane Powell, he had been “suffering from arthritis and bouts of dementia.”

At the behest of a persistent family friend, combined with the fact that his father was out of a job, Dickie Moore (born on Sept. 12, 1925, in Los Angeles) made his film debut as an infant in Alan Crosland’s 1927 costume drama The Beloved Rogue, starring John Barrymore as François Villon; Moore was seen as the baby Villon. From then on, although never a child or teen or adult movie star, Moore would keep working in films all the way to the early ’50s. 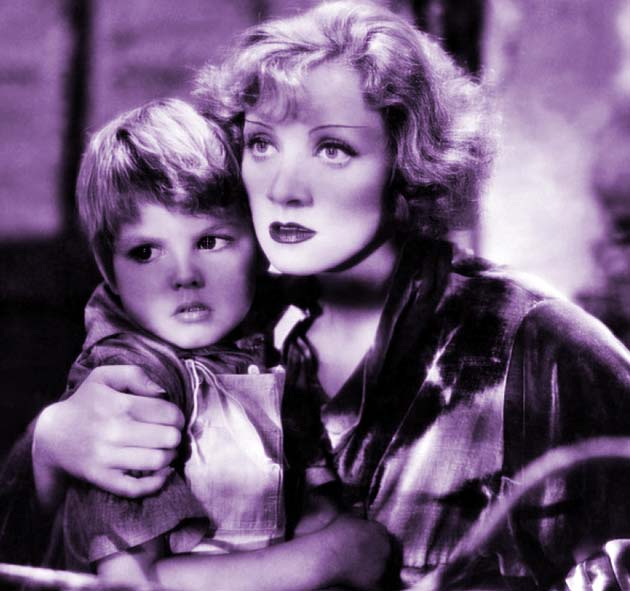 Yet Moore was also seen in dozens of feature films of the early ’30s. Back in those days, he seemed like the Hollywood studios’ go-to little boy. By the time he was 10, Dickie Moore had appeared in about 60 features and shorts.

He played Richard Barthelmess as a child in Frank Lloyd’s Son of the Gods (1930); pouted his way into the heart of folksy widower Charles ‘Chic’ Sale in Archie Mayo’s unabashedly sentimental B comedy-drama The Expert (1932), based on a play by Edna Ferber and George S. Kaufman (itself adapted from a short story by Ferber); and he was Barbara Stanwyck’s and Marlene Dietrich’s son in, respectively, William A. Wellman’s So Big! (1932) and Josef von Sternberg’s Blonde Venus (1932).

In 1933, he starred in William J. Cowen’s Oliver Twist – but this was a minor retelling of Charles Dickens’ novel, produced by one of the Poverty Row studios, Monogram.

More important was a supporting role that same year in MGM’s bizarre, pro-theocratic fascism political drama Gabriel Over the White House, in which Moore was seen as the nephew of “possessed” (by the angel Gabriel) U.S. President Judson Hammond (Walter Huston). “I love my uncle Judd,” he tells the film’s hero, “because he’s going to cure the Depression and make everybody rich.”

Fewer roles in his teens

As Dickie Moore grew older – as in, on the cusp of adolescence – roles became somewhat scarcer. (Also, a bout with scarlet fever supposedly left him out of commission for a while.) At that time, he was no competition to the likes of Freddie Bartholomew and (the slightly older) Mickey Rooney, both of whom had become MGM stars. Moore’s name, if seen at all in the credits, were not infrequently found near the bottom of the cast list.

One relatively important exception was the minor Kay Francis star vehicle My Bill (1938), a John Farrow-directed drama in which Moore was Francis’ only non-ungrateful – and, as it turns out, mighty lucky – child.

Also in the mid-to-late ’30s, he was briefly seen as a boy saved from rabies by Best Actor Academy Award winner Paul Muni in The Story of Louis Pasteur (1936) and was the son of Captain Dreyfus (Best Supporting Actor Oscar winner Joseph Schildkraut), a victim of French anti-Jewish bigotry, in William Dieterle’s Best Picture Academy Award winner The Life of Emile Zola (1937).

Professionally, things didn’t get much better during Moore’s teen years. He was one of Gary Cooper’s siblings in Howard Hawks’ box office hit Sergeant York (1941); had an important role in Edwin L. Marin’s B teen flick Miss Annie Rooney (1942), as a cute nerd who gives fast-fading Shirley Temple her first (official) on-screen kiss (Moore later remembered it as his first boy-on-girl kiss ever);[2] and landed uncredited bits in prestigious fare such as Ernst Lubitsch’s Heaven Can Wait (1943) and Henry King’s The Song of Bernadette (1943).

In Jacques Tourneur’s classic film noir Out of the Past (1947), Dickie Moore, then in his early 20s, was billed simply as The Kid. Five years later, his movie acting career came to an abrupt halt following bits in Edward Dmytryk’s Eight Iron Men and Fred Zinnemann’s The Member of the Wedding – in both of which he was billed as Dick Moore.

During that period, his most notable film effort was actually a two-reel short: The Oscar-nominated Boy and the Eagle (1949), in which he was featured as a disabled young man who nurses a wounded eagle back to health. Moore also co-produced the short with William R. Lasky, who directed it. (Moore is supposed to have co-directed it as well, but only Lasky was nominated for the Oscar; the winner that year was Gaston Diehl and Robert Hessens’ Van Gogh.)

After serving as a correspondent for the U.S. military newspaper Stars and Stripes during World War II, Dickie Moore went to college in Los Angeles, eventually receiving a degree in journalism.

After the demise of his movie career, he moved to New York City, where he worked on radio, television, and the stage. According to online sources, he’s the Dick Moore playing a supporting role in the 1956 Broadway production of George Bernard Shaw’s Saint Joan, starring Siobhán McKenna in the title role.

Later on, he became involved in Actors’ Equity Association, the stage actors’ union. In 1966, he formed his own public relations firm, Dick Moore and Associates, which served as the American Federation of Television and Radio Artists’ (AFTRA) public relations counsel, overseeing the production of AFTRA Magazine.

Below: Dickie Moore discusses the plight of child actors.

Dickie Moore’s examination of the plight of child actors, Twinkle, Twinkle, Little Star (but don’t have sex or take the car), which also included some autobiographical information, came out in 1984. “All of us shared common lives and times,” he wrote, “huge responsibilities and salaries that shriveled fathers’ egos.”

Gary Cooper was at one point Moore’s ideal adult male figure (he played the boy Cooper in Henry Hathaway’s 1935 romantic fantasy Peter Ibbetson), but Barbara Stanwyck is supposed to have been his favorite adult film star. “Affectionate and demonstrative,” he would recall in his book, “she was easy to understand. She talked but didn’t fuss. She was a direct and gracious woman, who seemed extremely interested in whatever interested me.” 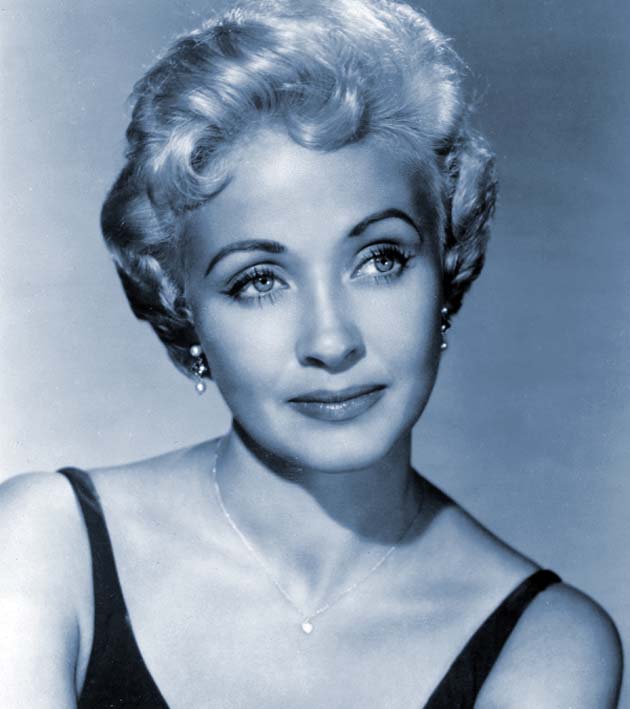 Dickie Moore and Jane Powell were married in 1988. The couple lived in Wilton, Connecticut. Online sources state they also had a home in Manhattan.

Dickie Moore was one of the few – at least relatively – well-known movie actors of the 1930s still alive. Among the survivors of that era, from Hollywood and elsewhere, are:

Another Our Gang / Rascals player, Jean Darling, died at age 93 on Sept. 4. Moore and Darling never worked together, as her brief movie career all but ended at age 7 in 1929.

According to online reports, the only known surviving Our Gang cast members (from the 1920s to the 1940s) are Robert Blake, Sidney Kibrick, Mildred Kornman, Leonard ‘Percy’ Landy, and Jerry Tucker.

That information, however, is incorrect. Deadline.com, which apparently broke the news of Moore’s passing, featured the Pat Kingsley connection. That bit has since been deleted.

As per the New York Times, Moore did indeed have a sister named Pat Kingsley – but not the Hollywood publicist.

[2] As per online sources, Shirley Temple’s actual first screen kiss was seen in Charles Lamont’s 1932 comedy short War Babies, when she was 4 years old. Eugene Butler was the other lip-locker. Temple and Butler were featured as miniature versions of the characters found in Raoul Walsh’s 1926 blockbuster What Price Glory, with Dolores del Rio and Edmund Lowe.

[3] Others interviewed for Twinkle, Twinkle, Little Star (but don’t have sex or take the car):

Missing from the list are Deanna Durbin, who almost invariably declined to discuss her Hollywood days, Mickey Rooney, and Freddie Bartholomew.

Dickie Moore Gabriel Over the White House quote via the IMDb.