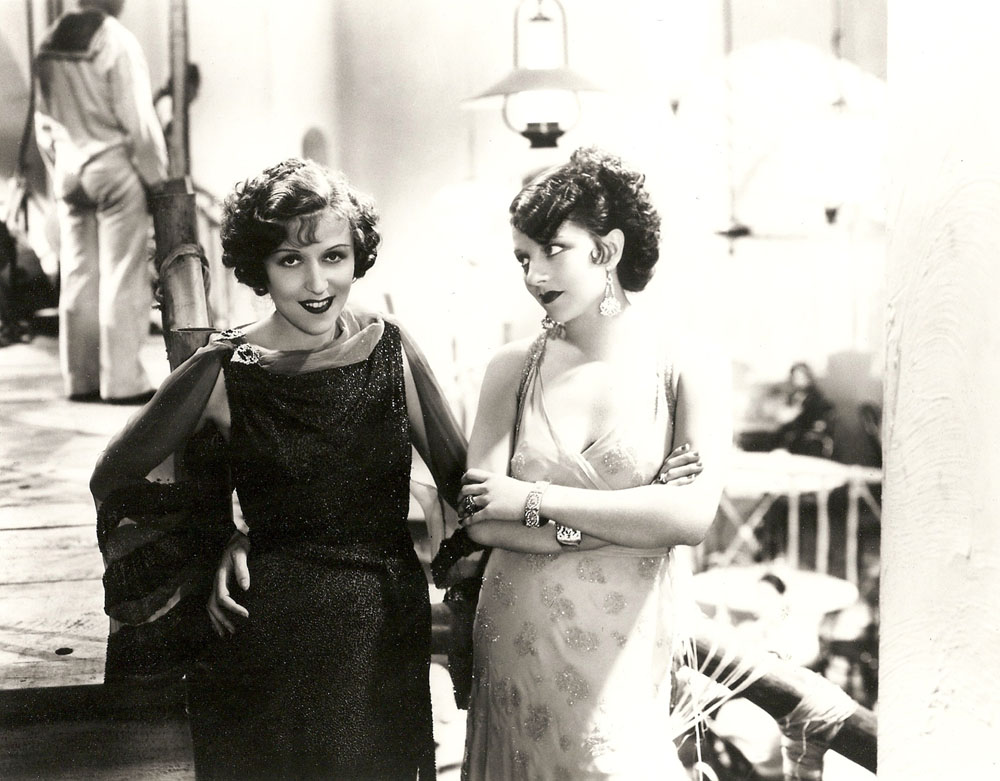 Diseuse Berta Singerman and Luana Alcañiz in Nothing More Than a Woman.

The 1934 melodrama Nada más que una mujer / Nothing More Than a Woman, a unique sample of the many Spanish-language versions of Hollywood films made for export in the 1930s, will be screened at 7:00 p.m. on Sunday, October 19, at UCLA’s Billy Wilder Theater in Westwood. Nothing More Than a Woman will be followed by the 1933 romantic comedy No dejes la puerta abierta / Don’t Leave the Door Open, starring Raul Roulien of Flying Down to Rio. Both restored, 35mm prints will be screened with English subtitles.

“Once sound films had become firmly established in the late ’20s,” wrote film historian Robert Dickson in the program for UCLA’s 1998 film preservation festival, “and before the advent of acceptable dubbing and subtitling, all of the major studios as well as several independent producers, fearful of losing their international audiences, began to make films in various foreign languages. The Fox studio elected to produce its foreign language releases almost exclusively in Spanish and, in the beginning, simply remade some of its English-language films, although it would later produce certain films only in Spanish. Between 1930 and 1935, Fox made [forty] features and [five] shorts in Spanish. Of these, only [around a quarter] appear to have survived.” (The corrections in brackets are from Bob Dickson; Bob – who was a great help while I was working on the Ramon Novarro bio Beyond Paradise – also explains that when Fox merged with 20th Century in 1935 its production of Spanish-language films was abandoned.)

Now, why is Nothing More Than a Woman unique among the surviving films?

Well, the chief reason is that it stars legendary Argentinean stage performer Berta Singerman, whom some have compared to Greta Garbo and Marlene Dietrich, in one of her rare film appearances. Singerman, in fact, made only two other pictures: the silent La Vendedora de Harrod’s / The Harrod’s Salesgirl in 1921 – it’s unclear if that’s a feature or a short – and the 1942 four-episode anthology drama Ceniza al viento / Ashes in the Wind, in which she can be seen in one of the stories.

Born in the small Russian town of Mozir in 1901 (some sources erroneously claim she was born in Minsk, in today’s Belarus), Singerman was a major star on the Argentinean stage since the 1920s. Her father founded Buenos Aires’ first Yiddish-language theater, while Singerman – despite several vicious anti-Semitic attacks (Google translation) in the Argentinean press and adverse publicity because of her anti-Franco stance – was particularly renowned for her poetry recitations, including works by Pablo Neruda, Federico García Lorca, and Juan Ramón Jiménez. She toured for decades throughout Latin America, and also appeared onstage in the United States, Europe, and Israel.

Singerman uses her “poetry interpretation” talent to good advantage in the steamy Nothing More Than a Woman, which is set in an off-the-beaten-path island of The Philippines. The Spanish-language version of Fox’s B-melo Pursued (1934), Nothing More Than a Woman tells the story of Mona Estrada (Singerman), an entertainer who asks for – and, gasp!, gets – a job at the local tropical dive reciting poetry to customers. Whereas Dickson has noted that the plot “does not encourage close scrutiny” – Mona also has a love affair with a temporarily blinded plantation owner – Kenneth Turan wrote in the Los Angeles Times back in 1998 that “when Singerman launches into one of her rhythmic, racy, mesmerizing vocal presentations, you’re afraid to so much as blink in case you miss a word.”

Indeed, even though the Nothing More Than a Woman plot and production values aren’t quite A-class stuff – except for Rudolph Maté’s moody cinematography – Singerman more than holds her own as the mysterious woman with both a shady past and a talent to make words of poetry come to vibrant life. (The title of an IMDb contributor’s review reads “An Unexpected, Vital Must-See Performance.”)

At the time, the New York Times reviewer was impressed by the “diseuse” Singerman’s performance, writing “her presentation of ‘Pregones en [sic] Buenos Aires’ is so realistic that the spectator only has to close his eyes to imagine himself listening to the varied and strangely alluring calls in the streets of the Argentine metropolis. Señorita Singerman’s acting is excellent, with due allowance for the sentimentalities of the case, and she properly may be described as ‘may [sic] simpática.'”

Also in the Nothing More Than a Woman cast: Alfredo del Diestro, Juan Torena, the Spanish actress Luana Alcañiz (who starred in numerous Spanish-language versions of Hollywood films), Lucio Villegas, and Carmen Rodríguez. Harry Lachman directed from Lester Cole (one of the future Hollywood Ten) and Stuart Anthony’s Pursued screenplay, which in turn was taken from Larry Evans’ story “The Painted Lady.” Raymond Van Sickle and John Reinhardt wrote the Nothing More Than a Woman adaptation, while Miguel de Zárraga and Spanish satirist Enrique Jardiel Poncela (uncredited) penned the Spanish-language dialogue. (According to Bob Dickson, Jardiel Poncela’s name was removed from the credits so audiences wouldn’t think they were about to watch a comedy.)

Rosemary Lane and Victor Jory starred in the original Pursued, while Peggy Shannon and Spencer Tracy headed the cast of the hard-to-watch The Painted Woman (1932), taken from the same story. George O’Brien and Dorothy Mackaill starred in the 1925 silent version.

Berta Singerman, I should add, died in her sleep of respiratory failure in Buenos Aires in 1998, at the age of 97. Singerman, as quoted in the daily El Clarín (Google translation), once said, “I brought poetry back to the people. I took poetry out of the books, which were only accessible to a select minority.” And finally, in the words of Spanish classical music composer Manuel de Falla: “While we, composers, look for music for our words, Berta extracts music from words.”

In the light musical comedy Don’t Leave the Door Open, the Spanish-language version of Pleasure Cruise, Mexican Rosita Moreno (right, who starred in eighteen other Spanish-language productions) and Brazilian Raul Roulien (whose Spanish is remarkably fluent) star as a recently married couple whose troubles begin quite early in the marriage: Wife Moreno believes that husband Roulien is having an affair, so she decides to have a fling of her own while on a cruise from New York to Havana. Though hardly a masterpiece – the New York Times called it a “fairly entertaining comedy of matrimonial complications,” Don’t Leave the Door Open is worth a look as a curiosity piece. As a plus, both Moreno and Argentinean acting legend Mona Maris are quite watchable.

Restored by the UCLA Film & Television Archive in the late 1990s, the preservation funds and grants for Nothing More Than a Woman and Don’t Leave the Door Open came from the American Film Institute, the National Endowment for the Arts, and Robert Dickson. Bob, by the way, is the co-author (with Juan B. Heinink) of the excellent Cita en Hollywood, a history of Spanish-language film productions in Hollywood during the 1930s.