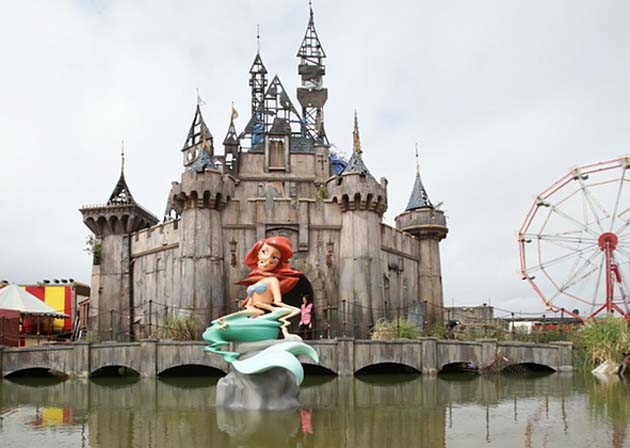 Who gives a damn about the cheap thrills to be offered by the Star Wars-themed expansion of Disneyland when you can relish the thought-provoking wonders of Dismaland? The artist Banksy, whose 2010 documentary feature Exit Through the Gift Shop was nominated for an Academy Award, has come up with his latest revolutionary artwork: a theme park for the bemusement of the whole family!

Or perhaps not quite the whole family. Banksy calls his 2.5-acre art show a “family theme park unsuitable for small children.” Another Dismaland plus.

Its construction shrouded in secrecy, Dismaland opened today, Aug. 20, ’15, on the sea front at Weston-super-Mare, in Somerset, southwest England. While the theme park was being built, locals believed that the work going on at the derelict Tropicana “lido” – shut down in 2000 – was the erection of a set for a Hollywood movie named “Grey Fox.”[1]

As explained in The Guardian, locals were hired as theme park workers after answering a newspaper ad looking for movie extras.

The Dismaland attractions were obviously not created with Finding Nemo and Toy Story 3 fans in mind. On the other hand, fans of Luis Buñuel’s Viridiana, Stanley Kubrick’s Dr. Strangelove, Tod Browning’s Freaks, Alfred Hitchcock’s Psycho, and most Lon Chaney films – and perhaps Takashi Miike’s Ichi the Killer and Adam Simon’s Brain Dead as well – will likely get a kick out of the following: 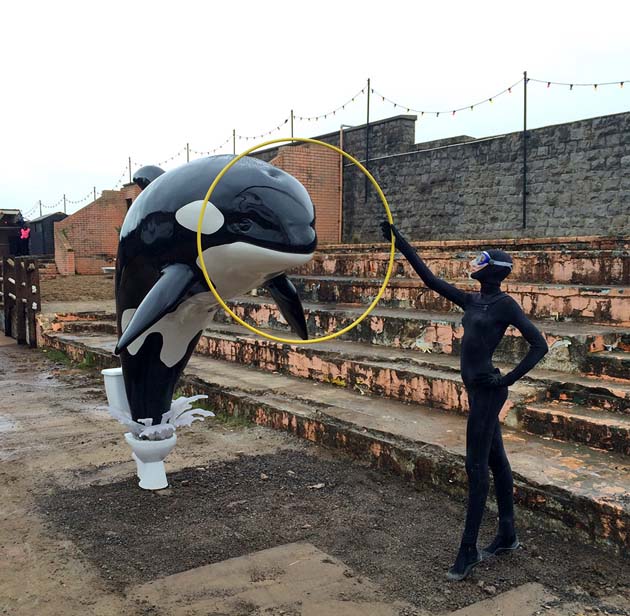 Dismaland SeaWorld orca artwork: Animal abuse for the entertainment of the whole family.

Now, is Dismaland a blood-drawing jab at Disneyland, Disneyworld, and their billion-dollar phoniness? Banksy says No. Clearly aware of the Walt Disney Company’s Happy-Go-Lawsuit policies, he asserted, “I banned any imagery of Mickey Mouse from the site. It’s a showcase for the best artists I could imagine, apart from the two who turned me down.”

But then again, the Dismaland logo is reminiscent of you-know-what. And what do those big, round black ears perched atop a Dismaland worker’s head remind you of?

Also, Banksy was not Disney-shy at all when he drew the picture of Mickey Mouse and Ronald McDonald holding hands with Kim Phuc, the iconic victim of the U.S. military’s napalm bombing during the Vietnam War.

Fifty-eight artists from about a dozen countries contributed to the Dismaland project, among them Damien Hirst, Shadi Alzaqzouq, Fares Cachoux, Escif, Jenny Holzer, Julie Burchill, Ronit Baranga, Darren Cullen, and Jimmy Cauty. Banksy himself was responsible for the Cinderella crash site and nine other creations.

According to The Guardian‘s Mike Brown, Banksy banked the art show out of his own pocket. Brown adds that “with 4,000 tickets a day at £3 each … [t]hat amounts to just over £400,000, so it is difficult to see a great profit given the obvious expenses.”

The suits at The Walt Disney Company wouldn’t have approved.

As found in an Aug. 5, ’15, Orange County Register report, “in the third fiscal quarter, [Disney’s Parks & Resorts division’s] operating income grew by 9 percent to $922 million and revenue rose by 4 percent to $4.1 billion.” 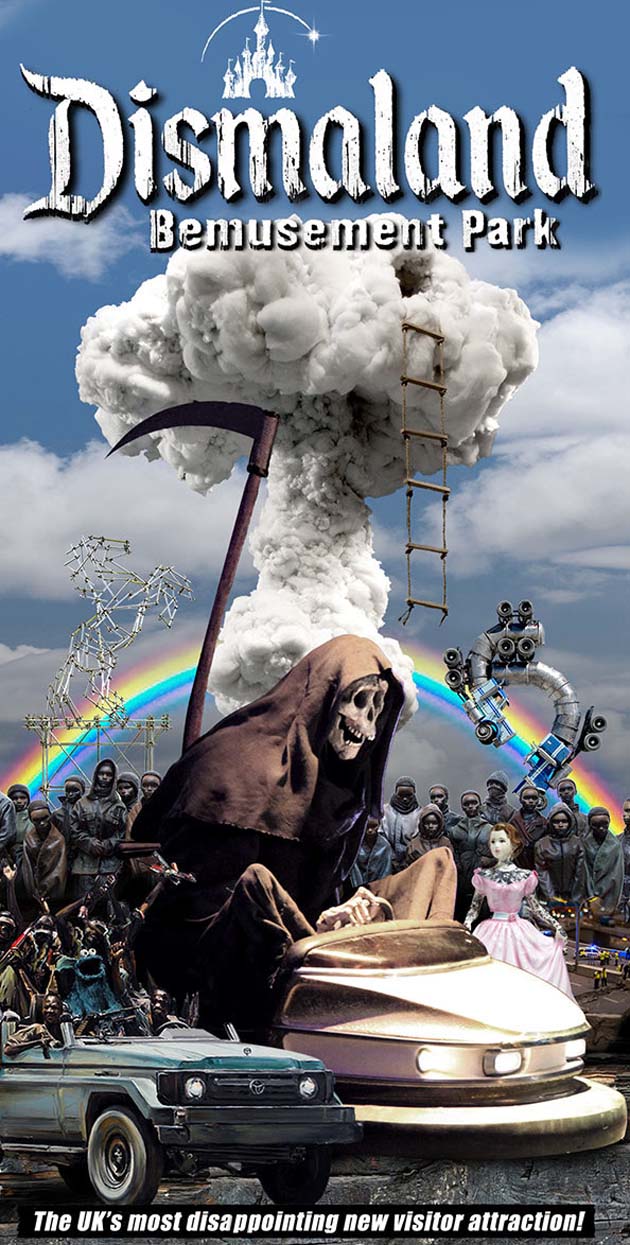 Referring to Dismaland as “a festival of art, amusements and entry-level anarchism,” Banksy states that it’s “an art show for the 99% who’d rather be at Alton Towers.”

Needless to say, some will find the art show-cum-theme park vulgar, crass, tasteless, offensive, obscene, unpatriotic, anti-family, and anti-god(dess). Banksy, however, sees it differently. “I guess you’d say it’s a theme park whose big theme is – theme parks should have bigger themes.”

Except, of course, that if theme parks had “bigger themes” they would never earn their parent companies $4.1 billion in revenues.

Dismaland will remain open until Sept. 27.

Besides Exit Through the Gift Shop, Banksy’s movie credits – at times, un-credits – include the following:

[1] No connection to Phillip Borsos’ 1982 Western The Grey Fox, starring Richard Farnsworth. Curiously, the IMDb does list a movie named Grey Fox, to be directed by Declan Whitebloom, as being “in development.”

Image of Dismaland SeaWorld orca: Christopher Jobson for the Colossal website, which features about a dozen large-size images of the theme park.