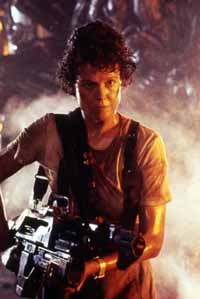 James Cameron’s Aliens was the 1986 sequel to the infinitely superior 1979 classic example of science fiction-cum-horror, Alien, the tale of a Creature from Out There whose favorite pastime is to chew on the crew of a mining spaceship.

The special effects were as good as those in the original, but mindless action replaced the previous film’s carefully constructed ominous atmosphere (those were the days when Ridley Scott actually bothered to direct movies), while Aliens’ cardboard characters and inane lines made this viewer ardently root for the ugly, but intelligent and well-rounded, Creatures.

I can only recall one moment in Aliens that truly worked – a case of nearly consummated outer-space bestiality, no less: That’s when Sigourney Weaver’s character, Ellen Ripley, the sole survivor of the original film, almost gets impregnated by one of the Creatures.

Needless to say, I was quite disappointed that Ripley remained a virgin.

Check out the press release below for details about a December 8 Aliens screening and discussion at the Academy of Motion Picture Arts and Sciences’ Linwood Dunn Theater in Hollywood.

Beverly Hills, CA — Aliens, the 1986 science fiction classic recognized for its groundbreaking visual effects, animatronic creatures and sound effects editing, will unspool for audiences at a special 20th anniversary screening that will include a panel discussion on Friday, December 8, at 7:30 p.m. at the Academy of Motion Picture Arts and Sciences’ Linwood Dunn Theater in Hollywood.

Starring Oscar®-nominated actress Sigourney Weaver as Ellen Ripley, Aliens picks up 57 years after the previous story ended. After barely surviving her first expedition to an alien-infested planet, Ripley is discovered by a deep space salvage team and taken back to Earth. When communication with the now-colonized alien planet suddenly ceases, Ripley is asked to return to the place where all of her nightmares began.

In conjunction with the “Prime Tech” series, the Science and Technology Council will present “Tech Art: The Photography of Vince Gonzales,” an exhibition showcasing more than 30 images of filmmaking technology as art. The installation, opening on Wednesday, December 6, in the foyer of the Dunn Theater, highlights the shapes, textures, colors and hidden details of industry machinery such as microphones, editing machines and projectors.

Established in 2003 by the Academy’s Board of Governors, the Science and Technology Council provides a forum for the exchange of information while promoting cooperation among diverse technological interests within the industry as well as sponsoring publications, fostering educational activities and preserving the history of the science and technology of motion pictures.

Tickets to Aliens are $5 for the general public and $3 for Academy members and students with a valid ID, and may be purchased in advance, either by mail or in person. The Academy’s ticket office is located at its headquarters at 8949 Wilshire Boulevard in Beverly Hills.

The Linwood Dunn Theater is located at the Academy’s Pickford Center for Motion Picture Study at 1313 North Vine Street in Hollywood. All seating is unreserved. Free parking is available behind the building through the entrance on Homewood Avenue. For more information, call (310) 247-3600.

James Cameron mixes elements from Aliens (odd-looking creatures) with The Abyss and Titanic (ocean depths) in the IMAX documentary Aliens of the Deep, which Cameron co-directed with Steven Quale (a second-unit director on Titanic). Those wondering what this “Aliens in the Abyss” mélange would look like will have the chance to check it out, along with another IMAX documentary, Ben Stassen’s Wild Safari 3D: A South African Adventure, on December 13, 2006, at 7 p.m. at California Science Center’s IMAX Theater in Exposition Park in downtown Los Angeles.

Free and open to the public, the Aliens of the Deep and Wild Safari 3D: A South African Adventure double feature will be the final installment in the Academy of Motion Picture Arts and Sciences’ 25th annual Contemporary Documentaries series. The screening is a presentation by AMPAS’s Academy Foundation and the UCLA Film & Television Archive.

Produced by James Cameron and Andrew Wight, Aliens of the Deep proves that aliens exist right under your nose – figuratively speaking, that is. (And no, this has nothing to do with nativism or xenophobia.) As described in the Academy’s press release, Aliens of the Deep “is an underwater adventure that takes the audience to some of the seas’ deepest depths, where an amazing array of creatures exists. These life forms are not dependent on sunlight for survival and may provide clues about life that might one day be encountered in outer space.”

As mentioned (or rather, implied) above, James Cameron is the director of the 1986 sequel to Ridley Scott’s 1979 classic Alien. Titled Aliens (sequels must be bigger, if not necessarily better, than the originals), Cameron’s horror thriller earned Sigourney Weaver a Best Actress Academy Award nomination.

The Abyss, starring Ed Harris and Mary Elizabeth Mastrantonio, was a box office disappointment when it came out in 1989. Titanic, on the other hand, was a worldwide megablockbuster. The multiple Oscar winner starred Leonardo DiCaprio, Kate Winslet, and veteran Gloria Stuart. Note: To date, Titanic remains director James Cameron’s most recent narrative feature.

In Wild Safari 3D: A South African Adventure, “the beauty and grace of the elephants, Cape buffalo, rhinos, leopards and lions of South Africa’s game reserves are brought to the screen through the use of stereoscopic photography. Across grassland and savannas, viewers make a 3,000-mile journey into the natural habitats of these animals, considered the most dangerous on the continent.”

Well, I’m not so sure about that last sentence; after all, by far the most dangerous animals “on the continent” – any continent – are greedy, well-equipped, and murderous human beings who seem to be doing all in their power to destroy Africa’s endangered fauna.