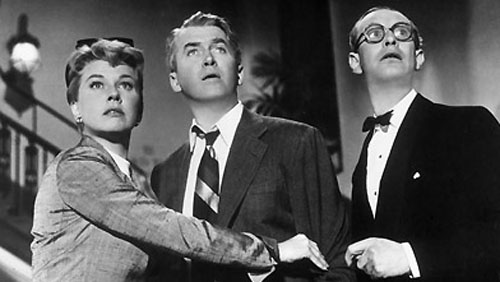 Doris Day movies: The Man Who Knew Too Much with James Stewart.

Performers like Doris Day usually turn my stomach. Those Hollywood goody-goody types bother me because they’re phony, dishonest, dumbed-down versions of real human beings; they’re all light and sunshine to the point of causing blindness and third-degree burns, all sweetness and happiness to the point of causing life-threatening insulin imbalance and irrational thoughts of suicide.

Strangely – unlike, say, Shirley Temple, Mickey Rooney, or James Stewart – Doris Day, despite her freckled, bleached blondeness, a smile generating enough wattage to power a mid-sized country, and most disturbing of all, a latter-day obsession with virginal sex (say what?), has never made me sick, blind, or suicidal.

I’d say that’s because, unlike most sparkling-clean Hollywood heroes and heroines, Doris Day has always been a genuinely warm and honest performer. Her smile feels genuine, her freckles look genuine, her singing sounds genuine, even her blondeness looks bleachedly real. At times, her tears are all too real, as well.

Those can be spotted in the Ruth Etting biopic Love Me or Leave Me, in which she gets slapped around by James Cagney, and in Alfred Hitchcock’s absurd but enjoyable The Man Who Knew Too Much, in which her son is kidnapped. Doris Day should have won an Oscar for the latter, if only because she was able to turn that tackiest of songs, “Que Sera Sera,” into one of the most singable ditties the movies have ever produced.

Young at Heart is a lighter, pleasant remake of the equally pleasant Four Daughters, with Day in the old Priscilla Lane role. Like every Doris Day color film, Young at Heart looks bright and hue-full beyond belief – the 1950s as they never were, not in the US, not anywhere on Earth.

Julie is a curious (black-and-white) thriller, with Day as a stewardess married to no-good Louis Jourdan (I’m assuming her airline never screened Letter from an Unknown Woman on one of her flights), while Teacher’s Pet (another one in black and white) pairs Day with Clark Gable, who was about a full generation older than she was. Their chemistry is lacking, but the film is a pleasant diversion nevertheless.

While I’m at it, make sure to check out this Doris Day website.

5:30 AM Billy Rose’s Jumbo (1962)
The daughter of a circus owner fights to save her father from a takeover spearheaded by the man she loves. Cast: Doris Day, Jimmy Durante, Martha Raye. Director: Charles Walters. Color. 128 mins. Letterbox Format

11:30 AM Romance on the High Seas (1948)
A singer on a Caribbean cruise gets mixed up in a series of romantic problems. Cast: Doris Day, Jack Carson, Janis Paige. Director: Michael Curtiz. Color. 99 min.

3:15 PM With Six You Get Eggroll (1968)
A widow and a widower have to contend with hostile children when they fall in love. Cast: Doris Day, Brian Keith, Barbara Hershey. Director: Howard Morris. Color. 95 mins. Letterbox Format