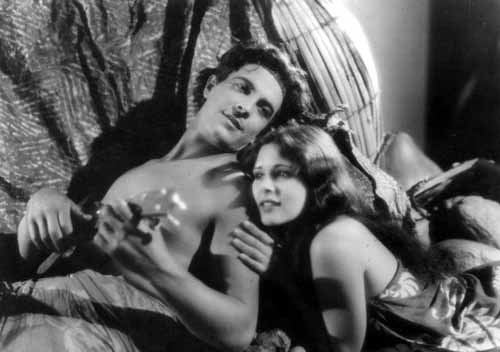 Dorothy Janis, who made a few film appearances at the dawn of the sound era and was the widow of bandleader Wayne King, died Wednesday morning, March 10, 2010, in the Phoenix suburb of Paradise Valley, according to musician Lew Williams, who received the news from Janis’ granddaughter. Janis, one of the last surviving performers to have played at least one major role in silent films, was either 98 or 100, depending on the source.

A pretty, petite brunette with sensuous lips – according to (possibly made-up) reports from the period, she was half-Native American – Dorothy Janis was born in Dallas on Feb. 19, 1910 or 1912. Her most notable movie role was that of the half-Pacific Islander, half-white heroine in W.S. Van Dyke’s The Pagan (1929), one of MGM star Ramon Novarro’s biggest box office hits.

In the film, which has no dialogue but features a music score, Novarro got to sing Arthur Freed and Nacio Herb Brown’s highly popular “Pagan Love Song,” at times accompanied by Janis – who actually just mouthed the lyrics; another female voice was heard on the film’s soundtrack.

Shot on location in French Polynesia, the deceptively simple The Pagan also happens to be one of the best productions made during that difficult transition from silent to talking pictures. The paragraph below is from my Novarro biography Beyond Paradise: The Life of Ramon Novarro:

“Similar in theme to White Shadows in the South Seas, The Pagan presents European civilization as indisputably the villain—an uncommon approach in films of the period. On the surface, the story is about a carefree but wealthy half-caste, Henry Shoesmith, Jr., who attempts to please a ruthless white trader so he can romance the man’s ‘Christian duty,’ a pretty half-caste girl. On a deeper level, The Pagan deals with the subversion of the island’s way of life by white invaders, from their belief that the value of nature lies only in pounds and dollars to their imposition of an alien and unsuitable religion. Although both Novarro’s and Janiss’ characters are part European, their behavior is all idealized Pacific Islander: playful and innocent. Renée Adorée’s Madge is the only good white character, though, significantly, she is a prostitute and an outcast in her own Euro-Christian society. Frances Marion and Novarro himself wrote the initial treatments—he expressly wanted to emphasize that the ‘pagan’ Henry Shoesmith behaved more like a Christian than the intolerant followers of Jesus—though Dorothy Farnum received the final adaptation credit. John Howard Lawson, one of the future Hollywood Ten, was responsible for the perceptive intertitles.”

Before The Pagan, Janis had appeared in three minor releases: the oaters Kit Carson (1928) and The Overland Telegraph, and the drama Fleetwing (1928), playing opposite minor leading man Barry Norton. Her only talkie was Lummox (1930), starring the former wife of cowboy star William S. Hart and 1910s leading lady Winifred Westover, then attempting a motion-picture comeback. Though directed by the renowned Herbert Brenon, an Academy Award nominee in the first year of the awards, Lummox was not a success.

Janis’ only other film appearance was in Harry Garson’s The White Captive, shot on location in Southeast Asia for Universal. In the Sept. 27, 1930, issue of the Norwalk Hour, a brief note mentioned that Garson “reports some of the most remarkable jungle material ever secured and the first to be taken with sound equipment.” Perhaps Garson was making that up, or perhaps his work was ruined either during the trip back to California or at some local lab, for The White Captive was deemed unreleasable. The film did, however, gain a certain degree of notoriety when the wife of technician Sidney Desmond Lund, with whom she had recently gotten married, filed a $25,000 lawsuit against Janis for stealing her husband’s affections during the months-long shoot. The lawsuit was eventually dropped.

Janis made no more films after that. At about the time of the scandal she met Wayne King, whom she married in 1932. Their marriage lasted until his death in 1985. “After I met Wayne,” Janis would tell author Michael Ankerich nearly six decades later, “it was to heck with it all.”

In the early ’90s, Ankerich published an account of his correspondence with the actress in Broken Silence: Conversations With 23 Silent Film Stars. With Ankerich as the middle man, about ten years ago I attempted to interview Dorothy Janis for my Novarro biography. Unfortunately, I never heard back from her.

A few months ago, Janis was able to watch a print of The Pagan that Lew Williams had given her. (Every once in a – long – while, the film is shown on Turner Classic Movies.) A family member told Williams “she enjoyed it immensely.”

With Dorothy Janis’ passing, I can think of only two surviving performers who had major adult roles in silent feature films: Barbara Kent (Lonesome) and Miriam Seegar (Valley of the Ghosts).

Note: Warner Home Video has released an “on-demand” DVD of The Pagan, but unlike what I had posted earlier that was not the print Janis saw.

March 25 update: Dorothy Janis, a.k.a. Dorothy King, was one of the last living adult performers to have had at least one major role in silent feature films. Janis died on March 10, 2010, at the age of 98.

I posted an obit on that date, explaining that Janis, the widow of bandleader Wayne King, was featured in a handful of movies right at the time when silent pictures were giving way to talkies. In fact, her one major silent film appearance wasn’t exactly in a silent film, for W. S. Van Dyke’s MGM blockbuster The Pagan featured a music score and the popular ditty “Pagan Love Song.”

Ramon Novarro, one of MGM’s top stars and a trained (but non-professional) opera singer, is the pagan who initially sings the love song. He’s later accompanied by Janis, who gets to sing – or rather, lip-sync to – it a couple of times in the film.

Janis had lived in the Phoenix, Ariz., suburb of Paradise Valley since 1959. Summers were spent at her home in Carbondale, Col. She and Wayne King were married for 51 years, until his death in the mid-’80s.

Also of interest is that in a death notice published in the local paper, Janis’ birthdate is shown to be Feb. 19, 1912 – not 1910 as found at most online sources.

The photo at the top of this post was provided by Kathy King, one of Janis’ grandchildren.

I came across a picture of Dorothy on Facebook. I was so captivated by her timeless beauty that I was driven to read and experience as much of her life as I could find. Unfortunately her film career was short which didn’t make for much history about her life which is disappointing. I did find The Pagan and ordered it. If anyone has an idea of how to locate and buy other films she is in, I would please much like to know the purchase location! As probably many have… I would have loved to have befriended her and encouraged Janis to continue acting i.e. movies, stage. Sadly very little is written about her and only a hand full of pictures exist. It’s crazy to say but I feel such a loss for someone I never knew :) RIP Dorothy Janis…

Ms. Janis was absolutely gorgeous, and after I first saw “The Pagan” I wanted to know more about the beautiful girl I just watched. I also love Ramon Novarro, and thought they made an adorable couple in the movie. I saw a picture of her in her 90’s, and she still was beautiful! I am glad she lived a long, happy life and that we have films to always watch so we can see her again.

I happened to watch The Pagan on TCM a few nights ago. Looking at Dorothy’s acting involving facial expressions and body language to convey emotions was a real treat. She was a beautiful lady and I think audiences lost something when she did not make more films than she did. It seems that her marriage to Wayne King and the many years she spent with him were just wonderful. I consider myself fortunate to have come across her talents while watching this movie. My best wishes to her family.

Dorothy Janis was an inspiration to all. Her acting was modern compared to her contemporaries. Her look was way ahead of the standards of beauty of her day. I saw her stills in the late ’60s and thought that she was part of the new breed of actors from that time. Recent pictures reveal that she did not only age gracefully, she didn’t age at all, a tribute to a good life. Jay Payton states that her brief contributions will be cherished forever and she will always be remembered fondly. I agree, Jay, and I thank you. And thank you to Ms Janis. Rest in peace, good friend.

Lovely tribute to Miss Dorothy, but the town is called Paradise Valley, not Alley.

Since the notice was prepared and submitted by her family, we must assume that 1912 is the correct year.

Dorothy Janis was a beautiful and talented Actress. She was one of the last from the silent film era. Her brief contributions will be cherished forever and she will always be remembered fondly.