This evening, Dec. 7, Turner Classic Movies will be placing the spotlight on Dorothy Malone, presenting six movies featuring the initially brunette, later mostly blonde actress whose career spanned five decades. The movies in question are: Warlock, The Last Voyage, The Fast and the Furious, Convicted, Tension at Table Rock, and Pushover.

Born Dorothy Eloise Maloney on Jan. 30, 1924, in Chicago, but raised in Dallas, the eventually y-less Dorothy Malone began acting in Hollywood movies in 1943.

Following a long apprenticeship throughout the 1940s, initially at RKO and later at Warner Bros. – where she playfully charms Humphrey Bogart in The Big Sleep – one would have expected the alluring brunette to have become a major film star. Somehow that didn’t happen.

Malone had a not inconsiderable amount of talent, charisma, lips, ass, bosom, and eyelashes – and by the late 1950s, an Oscar statuette as well (Best Supporting Actress for Written on the Wind, 1956). Even so, as far as studio executives were concerned, she was to remain – for about 15 years – no more than second-lead or, at best, leading lady material.

‘Written on the Wind’: Exception to the rule

Perhaps missing from the equation was a not inconsiderable amount of luck. Unlike other actresses who spent years stuck in supporting and/or thankless parts before reaching full-fledged stardom – e.g., Myrna Loy, Betty Grable, Jane Wyman, Ida Lupino, Ann Sheridan – Malone, at least on the big screen, seems to have been hardly ever cast in roles that made use of either her depth as an actress or her charisma as a film personality.

Compounding matters, in the rare instances when she was lucky enough to land a meaty part, the movies in question weren’t up to par, for instance, Art Napoleon’s Too Much Too Soon (1958), in which she was cast as John Barrymore’s alcoholic daughter-actress Diana Barrymore. (Errol Flynn brought to boozy life the Don Juan and Grand Hotel actor.)

This time around, TCM isn’t showing what may well be the one major exception to that rule: Douglas Sirk’s romantic melodrama Written on the Wind.

As Robert Stack’s willful, spoiled, alcohol- and sex-loving sister – in lust with stalwart (and here, rather stolid) Rock Hudson – Malone’s performance isn’t exactly profound or subtle, but it works beautifully all the same, perfectly blending in with Sirk’s overornate Technicolor universe. (Check out Dorothy Malone displaying her mambo-dancing skills.)

Misused talent even at her peak

All but one of the six movies TCM is showing this evening came out when Dorothy Malone was at the (brief) peak of her popularity, roughly from the mid-1950s to 1960. It’s telling that in none of them she plays the actual central character; either the films revolve around their leading men or, as in the case of The Fast and the Furious, she has a role on a par with that of her male costar.

One of the prolific Roger Corman’s myriad B productions, The Fast and the Furious (1955) is completely unrelated to the testosterone-packed, neuron-deficient, 21st-century movie franchise starring Paul Walker and Vin Diesel.

Instead, the “original” The Fast and the Furious follows an – until then innocent – escaped convict (actor & director John Ireland), who, while on the run, kidnaps a Jaguar-driving babe (Dorothy Malone) ready for some rough-and-tumble action.

Why so many thrills? Well, because husband Robert Stack (instead of the originally announced Stuart Whitman) spends much of the film trying to rescue wife Dorothy Malone from a sinking ocean liner.

A money-loser for distributor Metro-Goldwyn-Mayer, the Best Visual Effects Oscar-nominated The Last Voyage marked the third and final Robert Stack-Dorothy Malone collaboration, following Sirk’s Written on the Wind and the slow-moving The Tarnished Angels (1958). 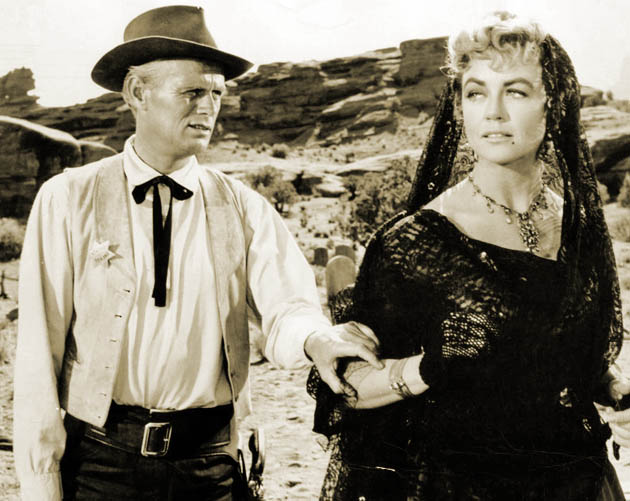 Dorothy Malone in Warlock, with Richard Widmark. Best Supporting Actress Academy Award winner Dorothy Malone (Written on the Wind, 1956) plays a subordinate role in Edward Dmytryk’s 1959 Western also starring Henry Fonda and Malone’s fellow 1956 Oscar winner Anthony Quinn (Best Supporting Actor for Lust for Life). Unlike Malone, who had to wait years for a good showcase only to continue to be offered mostly unworthy vehicles, Quinn, after an even longer apprenticeship, went on to become a major film star for nearly two decades.

Despite its Harry Potter-sounding title, Edward Dmytryk’s Utah-set Warlock (1959) is a Western, not a fantasy adventure. Although at the top of her movie fame, Dorothy Malone was cast in a subordinate role – fourth billed and, in the movie’s poster, in print smaller than that of leading men Richard Widmark, Henry Fonda, and Anthony Quinn.

And finally, TCM’s one pre-1954 presentation is Henry Levin’s Convicted (1950), a remake of Howard Hawks’ well-intentioned but creaky The Criminal Code.

The prison drama revolves around good-guy inmate Glenn Ford and his relationship with fair-minded warden Broderick Crawford, while Malone is seen in a chiefly decorative role as befitting a minor Hollywood leading lady (Constance Cummings in the original).

Dorothy Malone’s film career began winding down after The Last Voyage. She had one more subordinate role in one more Western, Robert Aldrich’s The Last Sunset (1961), and was, along with Robert Cummings, one of the two “adults” in the Frankie Avalon-Annette Funicello juvenile romp Beach Party (1963).

At that time, Malone switched her focus to television. The medium made her a household name thanks to the long-running – and groundbreaking – hit series Peyton Place (1964–1968), the first prime-time drama series on American television.

Malone played bookstore owner and single mother Constance MacKenzie, the role Lana Turner (as a clothing store owner) had originated in Mark Robson’s Oscar-nominated 1957 blockbuster of the same name.[2] Mia Farrow was cast as her daughter.

After being written out of Peyton Place in 1968, Dorothy Malone sued 20th Century Fox for $1.6 million for breach of contract, claiming that Constance had been turned into a minor character so as to force her to quit the series. The case was settled out of court.

With her Hollywood career virtually over, in the early 1970s she moved back to Dallas.

Malone was married three times: her first husband was handsome, French-born Gigi actor Jacques Bergerac (1959–1964), who had been previously married to Ginger Rogers (1953–1957);[3] the second was stockbroker Robert Tomarkin (1969–1969), but the union was annulled after she reportedly accused him of having married her for her money;[3] the third was Dallas-based motel chain executive Charles Huston Bell (1971–1973).

May 2018 update: As found in the Los Angeles Times’ Dorothy Malone obituary, when a reporter told her that she must be financially comfortable because of her work in Peyton Place, Malone, without naming names, countered: “Don’t you believe it. I had a husband who took me to the cleaners. The day after we were married, he was on the phone selling off my stuff.”

From the mid-1960s on, Dorothy Malone’s big-screen appearances became few and far between, as she sporadically lent her name to minor, little-seen fare such as the thrillers The Man Who Would Not Die (1975) and Golden Rendezvous (1977), and the horror flicks The Being (1983) and Rest in Pieces (1987).

Perhaps unsurprisingly, in 1983 the Dallas resident was rumored as a replacement for the ailing Barbara Bel Geddes in the hit TV series Dallas, but that came to nothing.[4]

Malone was last seen in a minor but memorable role – an apparent lesbian who had murdered her family – in Paul Verhoeven’s risqué 1992 sex thriller Basic Instinct, starring Sharon Stone and Michael Douglas.

At age 86, Dorothy Malone is one of the earliest surviving Oscar winners in the acting categories.

Update: Dorothy Malone died of “natural causes” at age 93 at a Dallas nursing facility in January 2018. 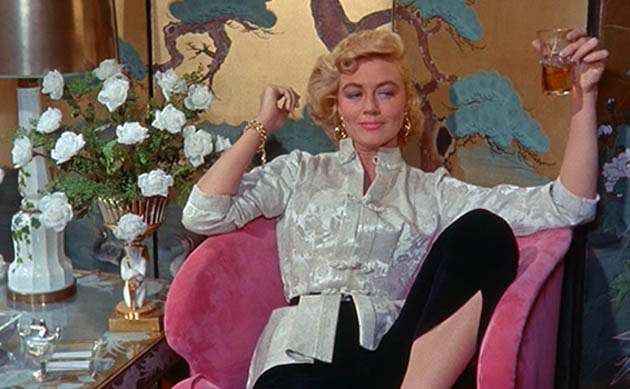 Dorothy Malone in Written on the Wind. After more than 40 film appearances over the course of 13 years, Douglas Sirk’s 1956 melodrama Written on the Wind earned a hard-drinking, sex-loving, mambo-dancing Dorothy Malone a Best Supporting Actress Academy Award. Despite the Oscar, real stardom would prove elusive until the 1960s hit TV series Peyton Place, in which Malone brought back to life the small-town New England character originated by Lana Turner in Mark Robson’s 1957 big-screen blockbuster.

[1] One woman wasn’t enough for Liberace in Gordon Douglas’ musical Sincerely Yours (1955). As a result, Dorothy Malone shared romantic duties with Joanne Dru.

Come to think of it, one woman was also not enough for James Cagney (as Lon Chaney) in Man of a Thousand Faces (1957). In this Joseph Pevney-directed biopic, Dorothy Malone shared romantic duties with Jane Greer.

[2] During the period when Dorothy Malone was convalescing following surgery to remove blood clots from her lungs, Lola Albright (Champion, the TV series Peter Gunn) took on her role in Peyton Place.

[3] Regarding Jacques Bergerac, with whom she became embroiled in a nasty child custody battle, Dorothy Malone later lamented, “I wish Ginger had warned me what he was like.”*

Five years after Malone had their marriage annulled, Robert Tomarkin, 44 at the time, was sentenced to up to five years in prison after “swindling” $600,000 from the Long Island-based Franklin National Bank, which went under in October 1974 – the worst such collapse in U.S. history up to that time.

Who Is Greta Garbo? Find Out on TCM + James Garner & Fred MacMurray