Below are some of the offerings at the U.S. Library of Congress’ Packard Campus in Culpeper, Virginia, in December 2009 (see detailed schedule further below). There’s no Marilyn Monroe smoking pot, but there’s instead Madeleine Carroll, one of Alfred Hitchcock’s early smoking-hot cool blondes. In addition to centenarian Douglas Fairbanks Jr. as both leading man and leading heel.

‘The Prisoner of Zenda’ 1937: One of greatest adventure movies ever + Douglas Fairbanks Jr. at his best

A David O. Selznick production directed by John Cromwell, the 1937 adaptation of Anthony Hope’s 1894 novel and Edward Rose’s 1895 play The Prisoner of Zenda is surely one of the best – and best-looking – period adventure movies ever made.

For starters, it’s superior to Rex Ingram’s lavish 1922 version[1], which, though enjoyable, is too stately for its own good. As a plus, the leads in the Selznick version are all first-rate:

In one of his memoirs, Bring on the Empty Horses, David Niven, who has a supporting role in The Prisoner of Zenda, credited David O. Selznick for the success of the film, writing that the romantic adventure “was a testament to what happens when a producer infuses all those around him with loyalty, enthusiasm, and a real joy in their work.”

Packard’s other Douglas Fairbanks Jr. screening is the phony, unfunny comedy Joy of Living, one of the weakest examples of the screwball genre.

As a conventional “all-American” leading man, Fairbanks Jr. comes across as a more monotonous, more obnoxious version of Rupert of Hentzau. But since Irene Dunne is the film’s leading lady, that in itself makes the Tay Garnett-directed would-be romp a must-see. 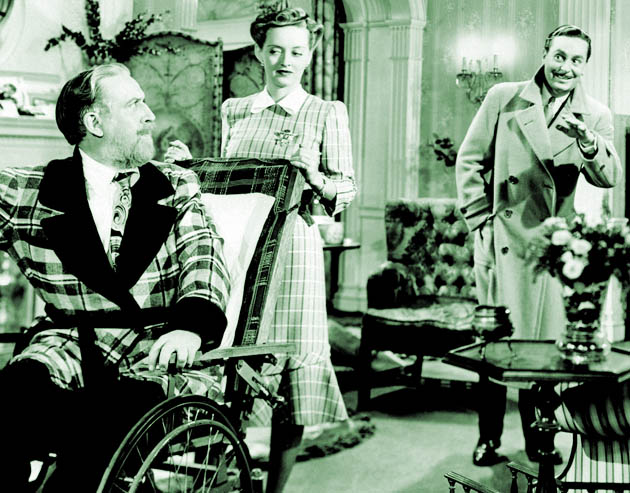 The Man Who Came to Dinner with Monty Woolley, Bette Davis, and Reginald Gardiner. William Keighley’s 1942 film version of The Man Who Came to Dinner is a perfectly watchable comedy – one that instead should have been a sparkling classic. Besides Keighley’s no-more-than-competent hand, the other problem with the film is the casting of the two leads: top box office draw Bette Davis, delivering a colorless performance in the “straight woman” role, and the effete Monty Woolley, theatrically reprising his hit Broadway star turn as the acerbic titular character. On the positive side, Reginald Gardiner is great fun as a Noël Coward-inspired type.

George S. Kaufman (an important personage in Mary Astor’s aforementioned scandalous diaries) and Moss Hart’s 1939 play The Man Who Came to Dinner is a masterful comedy. The clever lines and situations are all there; the issue is whether the cast and direction are up to them.

Not helping matters, the studio’s reigning queen, Bette Davis, is an ineffectual “straight woman,” obviously cast just for her box office value. Producer Hal B. Wallis had initially been interested in either Jean Arthur or Myrna Loy; either one would have been an improvement over Davis.

That said, Ann Sheridan (as actress Lorraine Sheldon, based on Gertrude Lawrence), Reginald Gardiner (as playwright Beverly Carlton, based on Noël Coward), and a group of penguins are all excellent in supporting roles of varying degrees of importance.

And so is Mary Wickes, who, in her “official” movie debut,[2] proves herself a natural as Whiteside’s nurse, Miss Preen, a character she had brought to life in the original Broadway production.

It’s too bad that Warners didn’t get to borrow George Cukor from MGM, as the Dinner at Eight and The Women director would surely have handled The Man Who Came to Dinner much more deftly than William Keighley, whose credits mostly consisted of watchable programmers (e.g., The Match King, Ladies They Talk About, Dr. Monica).

And it’s equally unfortunate that Sheridan Whiteside wasn’t played by Charles Coburn (Bachelor Mother, The More the Merrier), whose acting style was modulated for the big screen.

And that The Man Who Came to Dinner wasn’t remade a few years later at 20th Century Fox, where Whiteside could have been played by the effete – but big-screen friendly – Clifton Webb.[3]

The biggest domestic box office hit of the silent era, The Big Parade remains an impressive anti-war romantic drama, with Metro-Goldwyn-Mayer superstar John Gilbert in top form as a doughboy who loses a limb but finds love during World War I. Renée Adorée’s farewell moment is as heartrending today as it was more than eight decades ago.

Along with Best Picture Oscar winner Annie Hall, Crimes and Misdemeanors, and Bullets Over Broadway, the funny, witty, touching, disturbing Manhattan is one of Woody Allen’s greatest films.

And courtesy of this year’s Honorary Oscar recipient Gordon Willis, Manhattan itself never looked better, whether in black in white or in color – or in reality. Screenplay by Allen and Marshall Brickman.

Featuring a seemingly never-ending Christmas celebration, the three-hour Fanny and Alexander is one of Ingmar Bergman’s most gripping psychological dramas – one that should be screened in a double bill with the even more disturbing It’s a Wonderful Life (1946).

Fanny and Alexander won a number of international awards, including four 1983 Academy Awards – a rarity for non-English-language releases:

Featuring small-town “common folk,” an avaricious banker, a well-intentioned but misguided angel, a flood of sentiment and moralistic platitudes, fake snow, and a little girl playing the piano off-key, It’s a Wonderful Life is the stuff that nightmares – before, during, and after Christmas – are made of. 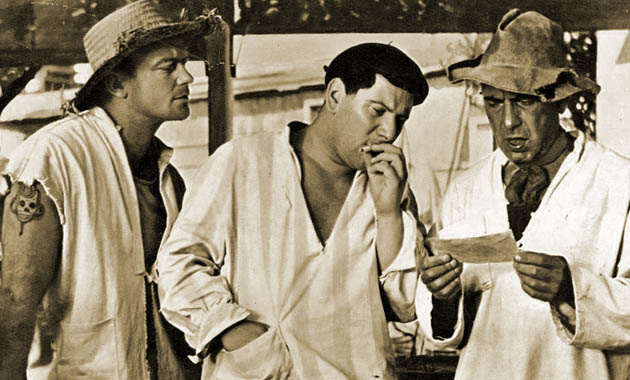 We’re No Angels with Humphrey Bogart, Aldo Ray, and Peter Ustinov. Michael Curtiz’s 1955 crime comedy We’re No Angels stars Humphrey Bogart, Aldo Ray, and Peter Ustinov as three Devil’s Island fugitives who become involved in the lives of a financially strapped family led by Mom Joan Bennett. Billed below the title in We’re No Angels, Bennett had made her screen comeback in Highway Dragnet the previous year; a star for two decades, she had been gone since 1951, when husband/producer Walter Wanger shot her agent, Jennings Lang, in the groin and thigh. Wanger believed his wife and Lang had been having an affair.

I’ve yet to check out We’re No Angels (1955), but with a cast featuring Humphrey Bogart, who did become a more than capable performer in his later years; a studly Aldo Ray, who could be quite funny (e.g., Pat and Mike); future two-time Best Supporting Actor Oscar winner Peter Ustinov (Spartacus, 1960; Topkapi, 1964); and, especially, veteran Joan Bennett (Little Women, The Reckless Moment), the crime comedy sounds like a must-see.

Michael Curtiz, who helped to solidify Bogart’s star persona in Casablanca, directed from a screenplay by Ranald MacDougall (Mildred Pierce), itself an adaptation of Samuel and Bella Spewack’s play My Three Angels, itself the English-language version of Albert Husson’s French play.

According to the Packard Campus press release, short subjects will be presented before select programs. All Packard Campus programs are free and open to the public, but bear in mind that titles are subject to change without notice. 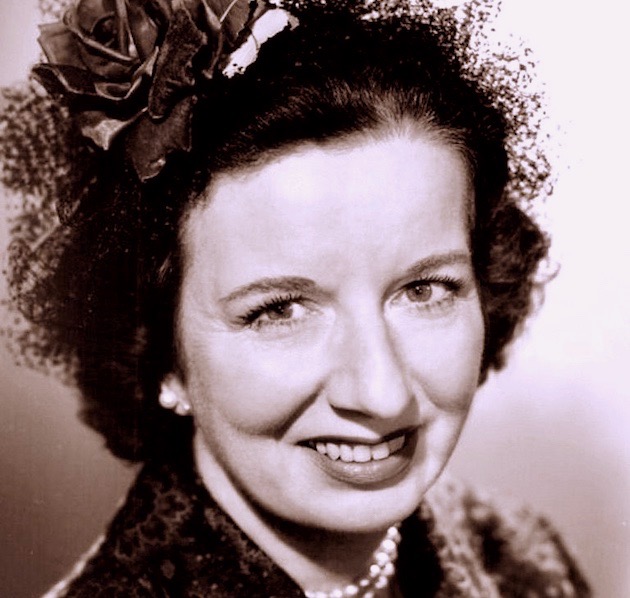 Mary Wickes. To this day a well-known face thanks to her countless film and TV appearances – from Private Buckaroo to Sister Act on the big screen, from The Halls of Ivy to Life with Louie on the small one – Mary Wickes (1910–1995) was an effortless scene-stealer, whether playing housekeepers, nurses, nuns, spinsters, busybodies, or grannies. One of the few cast members Warner Bros. imported from the original Broadway production of George S. Kaufman and Moss Hart’s The Man Who Came to Dinner, Wickes is one of the highlights in that studio’s William Keighley-directed version of the long-running stage hit.

‘The Prisoner of Zenda’ & its various casts

[1] For the record, Metro Pictures’ Rex Ingram-directed version of The Prisoner of Zenda starred Lewis Stone as the two Rudolfs, Alice Terry as Princess Flavia, Ramon Novarro as Rupert of Hentzau, Barbara La Marr as Antoinette de Mauban, and Stuart Holmes as Michael.

‘Too Much Johnson’ & Mary Wickes

[2] Prior to The Man Who Came to Dinner, Mary Wickes had been featured in Orson Welles’ uncompleted, made-for-the-stage 1938 silent film Too Much Johnson, which was supposed to have been a component of Welles’s Mercury Theatre presentation of actor-playwright William Gillette’s 1894 comedy.

As for Mary Wickes, she would enjoy a lengthy film – and later television – career. Among her nearly 50 big-screen efforts are:

[3] Television rights to The Man Who Came to Dinner were reportedly purchased in 1958, as a potential star vehicle for none other than Clifton Webb. It’s too bad that this project never came to fruition.

Webb did, however, star opposite Lucille Ball in a stilted March 27, 1950, Lux Radio Theatre broadcast of the Small Town Ohio-set tale.