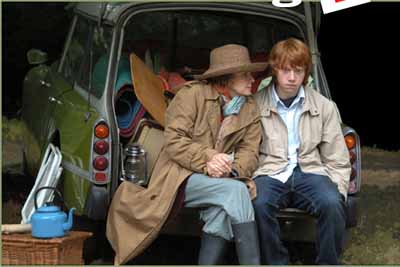 Jeremy Brock’s comedy-drama/road movie Driving Lessons, the story of how a Christian teenager finds inner freedom after becoming friends with a retired actress, is a moderately enjoyable coming-of-age story whose shortcomings in terms of direction and writing are compensated for by the ingratiating performance of its young protagonist, Rupert Grint.

Though inspired by the real-life friendship between writer-director (and vicar’s son) Jeremy Brock and the late stage and film actress Peggy Ashcroft, Driving Lessons feels like an anglicized update of Harold and Maude. This time around, the accents are all English or Scottish (plus Laura Linney’s mid-Atlantic twang); the young man, Ben (Rupert Grint), is obsessed with following Jesus and writing bad poetry instead of going to funerals and committing unsuccessful suicides; the soundtrack is filled with current pop tunes (plus a hip Salsa Celtica number) instead of Cat Stevens; and the older lady, Evie (Julie Walters), is not a sage derelict, but a bossy, feisty, booze-imbibing has-been second-rate actress best know for a TV series in which she had to deliver lines such as “I am a woman, not an oil tanker.” But the key elements found in that 1971 cult classic – personal freedom vs. stifling reactionary values, Older Woman leads Boy into Manhood, life is to be lived to the fullest and to hell with petty bourgeois rules – are all there.

Driving Lessons could have been as good a film as its predecessor had Brock, a screenwriter making his directorial début, displayed a firmer hand when guiding both his storyline and his leading lady, Julie Walters. Brock’s screenplay for the 1997 period drama Mrs. Brown, the tale of a romantic relationship between Queen Victoria and commoner John Brown, is an intelligent character study illustrated by the interplay between the story’s two leads. Brock’s Driving Lessons screenplay, however, even if inspired by real-life events, never fully gels into a cohesive whole. For although we witness Ben’s maturation as he learns to make his own decisions behind both the wheel of a car and the wheel of life, his strong attachment to the difficult and needy Evie – “You’re my only friend!” – feels like a movie cliché.

Additionally, more time should have been spent on both of Ben’s parents, especially the Evangelical Christian mom, Laura, capably played by Laura Linney. For instance, even though at the beginning of the story we get a subtle hint that Laura has been smitten by her church play’s sexy Jesus (Jim Norton), the revelation about Laura’s hypocritical behavior at the film’s climax feels like something taken out of a magician’s hat. (And what happens next feels like an unnecessary act of revenge against not only Laura, but all that she represents. In other words, domineering moms and religious nuts, beware.)

As a director, Brock allows much of the humor to fall flat. His handling of veteran Julie Walters, an actress who is capable of giving beautiful, flawless performances (Just Like a Woman, Sister, My Sister) but who is also capable of eating her scenery and spitting it out, too, is a case in point as Walters was apparently given free rein during shooting.

Initially, Walters’ calculatedly over-the-top performance detracts from both her character and the film. True, Evie is an actressy has-been actress, but many of the histrionics we see on-screen are Walters’, not Evie’s. As a result, moments that should have been hilarious – such as a scene in which the actress, sitting on a crowded bus, loudly inquires if the young man is gay – are ineffective because above Walters’ high-pitched tones one can hear the even louder creaking noise of the wheels turning inside her head. But over the course of Driving Lessons, either this reviewer simply got used to Walters’ mannerisms or she actually toned them down for she is quite effective in the film’s second half. Particularly amusing is her Praise Jesus incantation near the finale, as she makes the on-screen Fundamentalist Christians believe they are witnessing The Second Coming.

Grint, on the other hand, is a revelation. A supporting player in the highly popular Harry Potter series (in which Walters plays his mother), the young actor displays an innate naturalness mixed with personal charisma that turn a potentially pathetic Christian freak into a humorous, thoroughly likable – if more than a little awkward – young man caught between the dogmatic brainwashing perpetrated by his well-intentioned but psychopathic mother and his need to grow into his own person. Even when Brock’s words are inadequate – the final confrontation between Ben and his mother comes to mind – Grint delivers his lines with such honesty that he makes them ring true. Only a veritably accomplished actor can manage such a feat.

Though no coming-of-age classic, Driving Lessons offers enough pleasures to keep one’s interest for a couple of hours. But for the real thing, I’d suggest a look at Hal Ashby and Colin Higgins’ Harold and Maude.

Ben Marshall (Rupert Grint) is a shy, awkward seventeen-year-old living with his parents in a London suburb.

His father (Nicholas Farrell) is a well-intentioned vicar who is incapable of standing up for himself at home. Laura Marshall (Laura Linney) rules the household, keeping both men under her thumb. The Evangelical Christian Laura has brought into the house a silent, elderly man suffering from serious emotional issues after the death of his wife, and she seems to have taken more than mere spiritual interest in the church play’s hunky Jesus (Jim Norton).

When not taking manic driving lessons or rehearsing his role as a eucalyptus tree in the church play (directed by Laura), Ben writes bad poetry for the girl of his dreams. His ardor goes unreciprocated.

When Ben begins working as an assistant to retired, second-rate, alcoholic actress Evie Walton (Julie Walters), his life changes dramatically. Much to Laura’s displeasure, Ben and Evie go camping together, and he’s later tricked into driving her to Edinburgh for a poetry reading. (She wins him over by pretending that she’s near death.) Evie, in fact, seems to relish in breaking one rule after another – including giving alcoholic beverages to a minor. More importantly, she teaches him that no matter what Christian dogma says, “if you strive to do good, you’re a Christian,” and that one must have “the freedom to choose truth.”

In addition to learning all those new concepts, while visiting Edinburgh the seventeen-year-old also discovers the pleasures of both sex and salsa. But eventually he must return home.

Laura makes sure Ben won’t be seeing Evie again, but he tries to pay the drunken actress a (thwarted) visit. On the evening of the church play premiere, Evie shows up to attempt to liberate her boy from the clutches of both his mother and deranged Christianity.

Dame Peggy Ashcroft, director Jeremy Brock’s friend in his late adolescence, had a long and distinguished stage career in Britain. Among her numerous stage appearances were the title role in Ibsen’s Hedda Gabler; Juliet in Romeo and Juliet – she was reportedly the Juliet of her generation; the homely spinster in The Heiress; and Margaret of Anjou in War of the Roses.

Ashcroft’s film career, however, was sporadic. She is best remembered for one of her last film roles, the elderly Mrs. Moore in David Lean’s 1984 period drama A Passage to India. That role won Ashcroft a Best Supporting Actress Academy Award.

“I worked for Dame Peggy Ashcroft for a short time and I did live in her basement and I did have a really close friendship with her. The fiction bit is obviously the journey to Edinburgh that Ben and Evie take. The soul of the story – the friendship that Peggy offered me and the confidence she gave me, the fact that I adored her from afar – all of that is true. Peggy Ashcroft did not reciprocate my feelings because, of course, she was an icon.

“In the story what I’ve done is I’ve made the actress needier so there’s a journey they can go on. But essentially that rights-of-passage tale was my own experience.” Jeremy Brock interviewed by Joe Utichi in Film Focus.

“My [vicar] father was an intelligent and articulate advocate for old-fashioned notions of kindness and liberalism, but in the end I just did not feel that loving him was a justification for believing in a whole theocratic system. Religion in certain circles has become increasingly exclusive and aggressive. Fundamentalist attitudes pervade, and that, in its most extreme form, means you can kill anybody you want to because they’re an unbeliever.” Jeremy Brock interviewed by Sheila Johnson in the [London] Telegraph.

Near the end of Driving Lessons, Ben’s Christian mother, Laura, gets run over by a car. At the wheel was her increasingly deranged, cross-dressing tenant. Laura had previously ignored clear signs that the elderly widow living at her home was losing his mind rather rapidly.

At a Sept. 2006 Los Angeles screening, Jeremy Brock explained that dramatic turn of events, saying, “if you do the Evangelical thing to that extent, you’ll invite chaos.”

He added that the incident was inspired by real-life events.

Gay Zombie Movie Otto; Or, Up with Dead People Offends

niss and miss u

My driving licence story was a comedy as well, I only knew to drive a particular brand vechicle and when i was givena different one i had no clue how to do a test drive, but i should thank the tester as he approved my file for a licence.