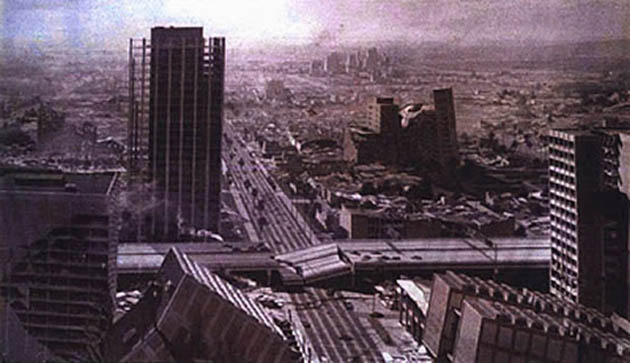 An acquaintance of an acquaintance of a friend claims he predicted several catastrophes in the not-too-distant past: the Indian Ocean tsunami, the Great East Japan Earthquake, the George W. Bush presidency, the near-collapse of the international banking system. His latest claim: the Big One will shake and rattle Los Angeles next December 25. Talk about a memorable Christmas gift.

Now, it’s unclear whether this acquaintance of an acquaintance etc. knows someone at New Line. But perhaps he does.

As per the Los Angeles Times blog 24 Frames, the studio is developing San Andreas 3D. Assuming you already know what 3D is, in brief, this is what San Andreas is all about: geological fault line running through California, more or less parallel to its coastline, splitting much of the state in half.

But just like Professor Pangloss in Candide, California keeps bouncing back. It managed to survive the giant ants in Them!, the giant squid in It Came from Beneath the Sea, adulterer Charlton Heston (a.k.a. Moses) in Earthquake 1974, Arnold Schwarzenegger in Sacramento, and even Volcano 1997, in which Tommy Lee Jones and Anne Heche battle the film’s title star in downtown L.A.

It’s less clear whether their grey matter will survive the film’s plot, as described by 24 Frames’ Steven Zeitchik: “… [T]he hero is forced to go on the road to reconcile with his children and his estranged wife, who’s moved away and taken up with another man a la John Cusack’s character in 2012.”

A handful of early credits

Wall Street: Money Never Sleeps and Just Go with It screenwriter Allan Loeb has penned the San Andreas 3D screenplay. He’s likely not expecting an Academy Award nomination for it, but no matter, as he should be receiving some fat paychecks and – in case San Andreas 3D does indeed get made and released – some heavy-duty residuals.

Beau Flynn, among whose credits are the Journey to the Center of the Earth and Red Dawn remakes, in addition to The Exorcism of Emily Rose and Slap Her… She’s French, is the attached producer. No director or stars have been assigned yet.

Earthquake 1974 with Ava Gardner and a semi-naked Charlton Heston. No matter the setting, major disaster movies of the 1970s followed a particular formula: a) lots of death (or near-death) and destruction b) a contrived plot (or series of subplots) c) first-rate production values d) veteran directors & movie stars lending a patina of above-the-line prestige to the schlocky proceedings. Earthquake 1974 was no exception to the rule. Representing d) were filmmaker Mark Robson and Old Hollywood stars Ava Gardner (Best Actress Oscar nominee for Mogambo, 1953) and Charlton Heston (Best Actor Oscar winner for Ben-Hur).

Released the same year as John Guillermin’s more popular and more prestigious (but equally trashy) The Towering Inferno, two years after Ronald Neame’s The Poseidon Adventure, and four years after George Seaton’s Airport, Earthquake 1974 was directed by two-time Academy Award nominee Mark Robson (Peyton Place, 1957; The Inn of the Sixth Happiness, 1958), who once upon a time had made small and well-received black-and-white movies at RKO (e.g., The Seventh Victim, The Ghost Ship, Bedlam).

George Fox and The Godfather author and screenwriter Mario Puzo co-wrote the screenplay, while the all-star Earthquake cast consisted of:

But really, the actual stars of Earthquake 1974 were both the visual effects – crumbling bridges and buildings, a bursting dam – and its revolutionary (i.e., gimmicky) sound effects technology.

Instead of 3D, Universal came up with Sensurround, a loud version of Odorama – minus the odor. Moviegoers could hear the earth rumble all around them, but they couldn’t smell it. (That may help to explain why Sensurround was a goner after a couple of years.) 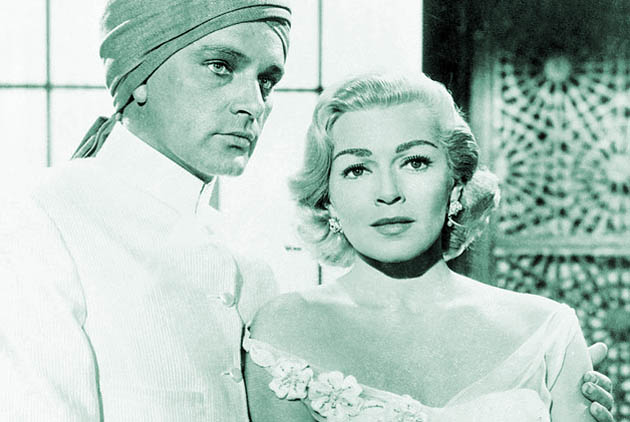 The Rains of Ranchipur with Lana Turner and Richard Burton. A remake of Clarence Brown’s The Rains Came (1939) – with Lana Turner and Richard Burton in the old Myrna Loy and Tyrone Power roles – The Rains of Ranchipur, despite its Oscar-nominated special effects, didn’t turn out to be the box office hit 20th Century Fox had hoped for. In fact, Jean Negulesco’s mix of romance, exotica, and disaster movie was a money-loser for the studio due to its high production costs. Ranchipur, by the way, is a fictitious location; non-studio sequences were reportedly shot in Pakistan and at the Fox Ranch in Malibu.

Long before Earthquake and the in-the-works San Andreas 3D, there was a trio of Hollywood movies featuring major seismic movements:

Ruth Warrick: From Citizen Kane to All My Children