Ed Catmull, co-founder of Pixar, president of Pixar and Walt Disney Animation Studios, and the author of a Harvard Business Review article titled “How Pixar Fosters Collective Creativity,” will soon be having his own creativity honored.

In recognition of “his lifetime of technical contributions and leadership in the field of computer graphics for the motion picture industry,” the Academy of Motion Picture Arts and Sciences’ Board of Governors has announced Catmull as the next recipient of the Gordon E. Sawyer Award.

The award – an Oscar statuette – will be handed to him at the 2009 Scientific and Technical Awards on Saturday, Feb. 7, at the Beverly Wilshire Hotel in Beverly Hills. Bits from the presentation will be seen at the Oscar ceremony to be held on Feb. 22 at the Kodak Theatre at Hollywood & Highland Center in Los Angeles.

In the year 2000, Ed Catmull, Rob Cook, and Loren Carpenter received an Academy Award of Merit “for their significant advancements to the field of motion picture rendering as exemplified in Pixar’s ‘RenderMan,’” a popular software that “produces images used in motion pictures from 3D computer descriptions of shape and appearance.”

The Academy’s release adds that “RenderMan” has been used in all but five of the last 50 films shortlisted for the Best Visual Effects Oscar.

Ed Catmull will be the 22nd recipient of the Gordon E. Sawyer Award, established in 1981.

Waltz with Bashir. The first animated feature and the first documentary to be named Best Film by the National Society of Film Critics, Ari Folman’s Israeli-made Waltz with Bashir is one of a number of non-English-language NSFC Best Film winners – e.g.: Ingmar Bergman’s Persona (1967), Shame (1968), and Scenes from a Marriage (1974); Costa-Gavras’ Z (1969); Eric Rohmer’s Claire’s Knee (1971); Luis Buñuel’s The Discreet Charm of the Bourgeoisie (1972); François Truffaut’s Day for Night (1974); Bertrand Blier’s Get Out Your Handkerchiefs (1978); Paolo and Vittorio Taviano’s The Night of the Shooting Stars (1983); and Akira Kurosawa’s Ran (1985).

No, not Pixar’s Andrew Stanton-directed blockbuster WALL-E, but Ari Folman’s Israeli-made anti-war documentary-ish Waltz with Bashir / Vals Im Bashir, about the filmmaker’s own experiences as a soldier during Israel’s disastrous 1982 invasion of Lebanon.

It’s hard not to believe that current events influenced the vote – the latest Gaza conflict has been going on since late December – though war or no war, Waltz with Bashir has been garnering nearly universal praise.

The winner of six Israeli Academy Awards (including Best Film, Best Director, and Best Screenplay) and its native country’s entry for the 2009 Best Foreign Language Film Oscar, Waltz with Bashir has already been voted the Los Angeles Film Critics Association‘s Best Animated Film (a sort of consolation prize, as the LAFCA’s Best Film was none other than WALL-E) and, in a tie with Man on Wire, the International Documentary Association Awards‘ Best Feature.

Additionally, Waltz with Bashir is both an Annie Award nominee and one of the semifinalists for the Best Animated Feature Oscar. (See Oscar 2009 Predictions.)

But isn’t ‘Waltz with Bashir’ a documentary?

Nothing unusual about that: the same happened when Edward Yang’s Taiwanese-made Yi Yi / Yi Yi: A One and a Two and Guillermo del Toro’s Spanish-language Pan’s Labyrinth / El Laberinto del fauno topped the Best Film category in, respectively, early 2001 and early 2007.

What’s unusual is that the Best Documentary category was left standing this year. The winner turned out to be James Marsh’s critical fave Man on Wire, about Philippe Petit and his high-wire act atop New York City’s World Trade Center.

In addition to Waltz with Bashir‘s Best Film win, another big surprise among the National Society of Film Critics’ selections was the Best Supporting Actress winner: veteran German performer Hanna Schygulla, singled out for her powerful portrayal of a woman trying to make amends with her dead lesbian daughter in Fatih Akin’s The Edge of Heaven / Auf der anderen Seite.

Hanna Schygulla is best remembered for her 1970s and early 1980s collaborations with Rainer Werner Fassbinder, most notably The Bitter Tears of Petra von Kant (1972), The Marriage of Maria Braun (1978; for which she was the NSFC’s Best Actress runner-up in early 1980), Lili Marleen (1981), and the television miniseries Berlin Alexanderplatz (1980).

Note: Viola Davis, one of the key players in John Patrick Shanley’s psychological drama Doubt, earned as many Best Supporting Actress points as Hanna Schygulla, but on fewer ballots. That’s why Schygulla was named the official winner. 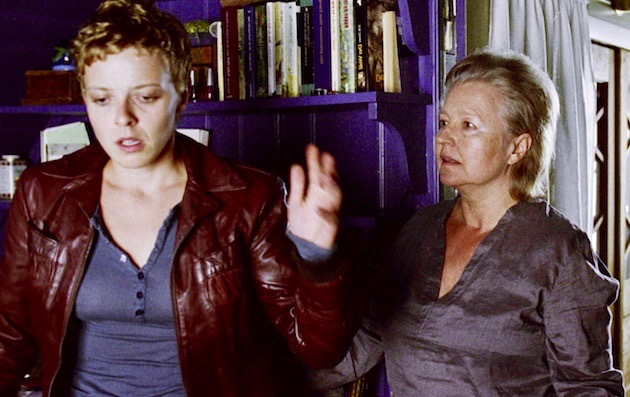 Now, if Hanna Schygulla was a major surprise, a relatively minor one was Mike Leigh’s double win – Best Director and Best Screenplay – for the supposedly improvised (screenplay-less?) comedy-drama Happy-Go-Lucky, the tale of a (cluelessly?) cheerful primary school teacher in early 21st-century London.

Why only “a relatively minor” surprise when Slumdog Millionaire‘s Danny Boyle is clearly this awards season’s favorite filmmaker?

Well, nine years ago Leigh took home the National Society of Film Critics’ Best Director award for Topsy-Turvy – which shared Best Film with Spike Jonze’s Being John Malkovich. Previously, he had been a top contender for Secrets & Lies (1996) and Best Film winner Life Is Sweet (1990). If that weren’t all, just a few weeks ago he was the New York Film Critics’ Best Director and a top contender in the Best Screenplay category.

Also regarding Happy-Go-Lucky, not at all surprising was the choice of its leading lady, Sally Hawkins, as the year’s Best Actress. Although relatively little known on the western side of the North Atlantic, Hawkins has already bagged a handful of Best Actress awards in the U.S., including those from the Los Angeles, New York, and Boston film critics. She’s also in the running for a Golden Globe.

On the other hand, quite a bit more surprising was the film’s male (near-)lead, Eddie Marsan being chosen Best Supporting Actor when Heath Ledger has been the runaway favorite for his (near-lead) performance as The Joker in Christopher Nolan’s The Dark Knight. In this instance, Ledger came in second place.

In recent years, critics’ faves and/or Best Picture Oscar winners such as Martin Scorsese’s The Departed, Ang Lee’s Brokeback Mountain, and Peter Jackson’s The Lord of the Rings: The Return of the King were hardly seen among the NSFC’s top picks or immediate runners-up in the various categories, while Paul Haggis’ Crash, Rob Marshall’s Chicago, Ron Howard’s A Beautiful Mind, and Ridley Scott’s Gladiator were totally left out.

Yet it’s – at least – somewhat surprising that critics’ fave and all-around sleeper hit Slumdog Millionaire managed only two shows this year: Best Cinematography for Anthony Dod Mantle and a third-place spot for director Danny Boyle. Dod Mantle, by the way, was also the winner of that American Society of Cinematographers Award. (See partial list of winners and nominees further below.)

Also “snubbed” was Kate Winslet, a favorite in the SAG Awards‘ and Golden Globes’ (and possibly the Oscars’) Best Supporting Actress race for her (lead) performance in Stephen Daldry’s The Reader. Winslet was also absent from the Best Actress roster, where she could have been a contender for Sam Mendes’ Revolutionary Road.

Of the 63 NSFC members, 49 sent in ballots this year. Only 23 critics were present at Sardi’s in New York City, and only those were eligible to vote in the second and third ballots.

Things can get really twisted around in follow-up ballots. For instance, according to reports, WALL-E was the initial Best Picture front-runner, followed by Milk and Waltz with Bashir.

Immediately below is the list of the 2009 National Society of Film Critics winners and runners-up. Further down you’ll find a partial list of the American Society of Cinematographers Award winners and nominees, the 2009 Oscar‘s Best Visual Effects semifinalists, the 2009 International Film Festival Rotterdam (Jan. 21–Feb. 1) movie line-up, and the American Cinematheque’s schedule of the screenings of this year’s Best Foreign Language Film Golden Globe nominees. 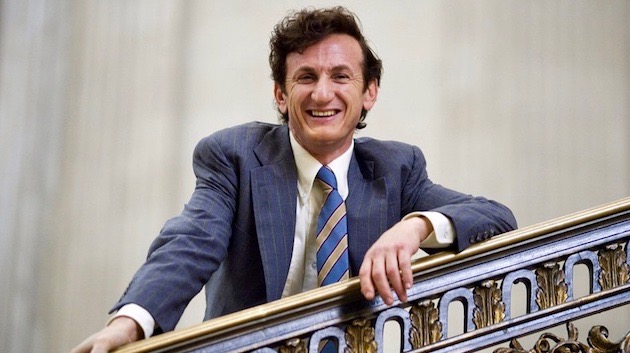 Sean Penn in Milk. Along with Mickey Rourke (The Wrestler), Sean Penn has been this awards season’s top Best Actor choice among various U.S. film critics groups. The National Society of Film Critics tends to go its own way, but every so often their views do fall in line with the awards season consensus. Case in point: Sean Penn, voted the year’s Best Actor for his portrayal of murdered, openly gay San Francisco Board of Supervisors member Harvey Milk in Gus Van Sant’s Milk.

Numbers in parentheses reflect the votes in the decisive balloting (whether first round, second round, etc.).

From Ed Catmull & the NSFC Awards to … The American Cinematheque and the Hollywood Foreign Press Association will be screening this year’s five Best Foreign Language Film Golden Globe nominees between Jan. 7–9, at 7:30 p.m., at the Aero Theatre in Santa Monica. Here’s the schedule:

On Sunday, Jan. 10, at 1 p.m. the Egyptian Theatre in Hollywood will present a panel discussion featuring the directors of the five films. Free admission. For more information, visit the American Cinematheque’s website.

Hanna Schygulla and Patrycia Ziolkovska The Edge of Heaven image: The Match Factory.

Avatar vs. Titanic: Which Is the Most Successful Movie?