Edmund Purdom, best known for his roles in two 1954 productions, the musical The Student Prince and the period epic The Egyptian, died in Rome on Jan. 1. He was 84.

Despite his two big mid-1950s hits, the super-handsome, English-born Purdom never quite made it to the top. Perhaps the reason for his lack of success in Hollywood had to do with the fact that Purdom left his wife for minor actress Linda Christian, with whom he moved to Italy not too long after they appeared together in another 1954 film, the MGM musical Athena. (Christian was at the time married to Tyrone Power; they divorced in 1956.)

Now, what Purdom was doing in no less than two MGM musicals I don’t know, but I do know that it’s Mario Lanza’s voice coming out of Purdom’s mouth in The Student Prince. Lanza, in fact, had been the original choice for the title role, but the recalcitrant star bowed out after production had begun. Ann Blyth (replacing Jane Powell, who reportedly had refused to play opposite Lanza) co-starred in what turned out to be your typically stilted, overdone mid-50s MGM musical. (Ramon Novarro and Norma Shearer starred in the much superior silent version in 1927.) 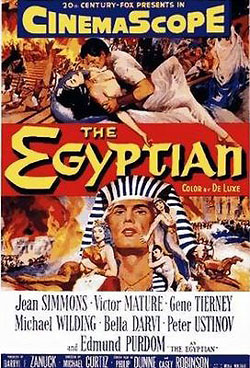 Based on Mika Waltari’s bestseller, The Egyptian was to have been a major Marlon Brando vehicle, but the actor withdrew from the project. (According to Henry Koster, Brando clashed with director Michael Curtiz.) Brando was then slapped with a seven-figure lawsuit courtesy of 20th Century Fox, while Purdom, who had a small role in Brando’s Julius Caesar (1953), landed the part of the physician Sinuhe of Ancient Egypt.

Purdom is great to look at in The Egyptian, but doesn’t offer much in terms of acting abilities – not that the role required any. He looks comfortable in period costume, and that seemed to suffice. The same can be said for the other names in the film, including Jean Simmons, Gene Tierney, Victor Mature, Michael Wilding, and Peter Ustinov. But wasted or not, those actors added a megahit to their resumes. (As an aside, the lawsuit against Brando was dropped after he agreed to star in the equally poor – and equally successful – Desirée, also co-starring Jean Simmons.)

Purdom’s two 1955 efforts, the period dramas The Prodigal, with Lana Turner, and The King’s Thief, once again reunited with Ann Blyth, proved to be box office disappointments. By the late 1950s, Purdom was playing in European period dramas such as Herod the Great (1959), in the title role, and Les Nuits de Raspoutine / The Night They Killed Rasputin (1960), in which he incarnates the mad monk.

In addition to starring in loads of low-budget productions during his five decades in Europe, Purdom also did dubbing and voice-over work.

Edmund Purdom was my crush when I was 14yrs old. After 2 husbands and 7 children and no computer during those years, I got lost in the hustle and bustle of daily life. Now, at 79, all alone and with a laptop but not so well adept with it, all I do is google him and read the same stories over and over again. I just regret there is only one good photo that shows him in his not-so-old-age, but I still love it. I also play the Student Prince and his other films over and over again. I was happy that Linda Christian loved him. For me, he will be my “Student Prince” forever in my heart.

Edmund Purdom was handsome.
Never seen anything with him that I recall

In 1994 I had the privelege of “directing” Edmund in Rome in a reading of Joyce’s “Dubliners” for a major Italian educational publishers, as well as co-ordinating a dramatised version of Shaw’s “Pygmalion” with him and other distinguished English-language voice-over artists resident in Rome. Staying at his flat, where his numerous cats kept me company overnight, was a fascinating and inspiring experience, as he entertained me and other guests with stories from his colourful life. And he had a wonderfully simple voicemail greeting: “Purdom - ROME!” Unforgettable.