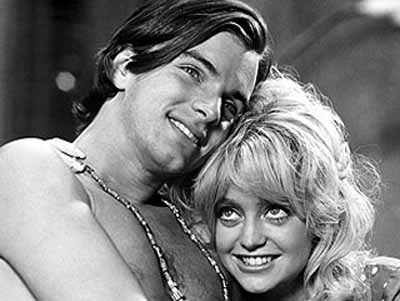 Butterflies Are Free with Edward Albert Jr. and Goldie Hawn.

Edward Albert, Goldie Hawn’s leading man in the 1972 romantic comedy Butterflies Are Free, died of lung cancer at his Malibu home on Sept. 22. He was 55.

Albert was born in Los Angeles on Feb. 20, 1951. (His middle name, Laurence, was an homage to his godfather, Laurence Olivier.) Both his parents were performers: two-time Academy Award-nominated Eddie Albert, best known for his irascible big-city-gone-country husband to Eva Gabor in the 1960s TV series Green Acres, and Margo, the Mexican-born actress whose most famous film role is that of the young-looking woman who is actually quite ancient in the Frank Capra-directed 1937 fantasy Lost Horizon.

After making his film début as a runaway teenager who meets an off-kilter Civil War veteran (Anthony Perkins) in the 1965 drama The Fool Killer, Albert took a long break from films to attend school. He later went to Oxford University, and was studying psychology at the University of California, Los Angeles, when he was cast in Butterflies Are Free.

Directed by Milton Katselas and written by Leonard Gershe (from his own play), Butterflies Are Free tells the story of a blind attorney (Albert) who becomes romantically involved with a kooky, free-spirited neighbor (Goldie Hawn) while trying to break free from his doting mother (Eileen Heckart). Albert’s performance earned him a Golden Globe as most promising male newcomer. The “promise,” however, was short-lived.

Following the 1973 romantic comedy 40 Carats, a major box office disappointment in which he played opposite Liv Ullmann, Albert’s film career lost steam. His subsequent – and infrequent – big-screen appearances (sometimes billed as Edward Albert Jr.), usually consisted of supporting roles in big productions (Midway, The Greek Tycoon, When Time Ran Out) and more substantial ones in small, independent movies (Ellie, Getting Even, The Ice Runner).

On TV, the medium in which he was to work most frequently, he played opposite Kate Jackson – to whom he was romantically linked – in two 1974 made-for-TV movies: The murder mystery Death Cruise and the Gothic horror piece Killer Bees, also co-starring Gloria Swanson.

In the next three decades, Albert was to have lead and supporting roles in a number of TV movies, besides making guest appearances in dozens of TV series, including Star Trek: Deep Space Nine, Dr. Quinn, Medicine Woman, and Sabrina, the Teenage Witch.

Onstage, he played a pivotal supporting role as the hero’s antagonist in Ed Begley Jr.’s 2003 production of Cesar and Ruben, a musical about the life of United Farm Workers leader Cesar Chávez.

In later years, Albert – like his father – became an environmental activist, serving on both the California Coastal Commission and the state’s Native American Heritage Commission. Of particular interest was Southern California’s Chumash culture. Additionally, Albert took an active role with Plaza de la Raza, a cultural center for arts and education that had been co-founded by his mother.

He also devoted much of his time caring for his Alzheimer’s stricken father. Eddie Albert died in 2005 at age 99. Margo died in 1985.

According to the IMDb, Edward Albert’s last film appearance, a supporting role in E. Paul Edwards’ romantic drama Street Poet, will hit the screens in January 2007.

As per the Los Angeles Times obit, at his death a Chumash medicine woman performed a traditional ceremony.

Next Door: Psychosexual Territory Where Hitchcock Never Dared to Tread