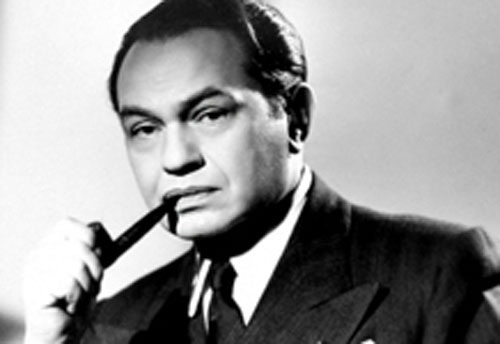 One of the greatest film actors of all time: Edward G. Robinson can be appreciated on Wednesday, Aug. 20, on Turner Classic Movies.

Like Barbara Stanwyck, TCM’s Star of Aug. 19, Robinson was just about incapable of delivering a performance lacking in either charisma or honesty. No matter how bad the movie, how small or thankless the role, Robinson invariably shone, bringing a touch of humanity and dignity to some of the screen’s vilest villains – all the while eclipsing his co-stars. Fellow Warner Bros. contract player Humphrey Bogart may have a much larger following today, but as far as I’m concerned Bogart is invisible whenever he’s had to share the screen with Robinson.

Robinson is at his best in John Huston’s Key Largo, which could have been a truly great movie if Bogart and Lauren Bacall – at their most ineffectual – had been replaced by, say, the underrated Steve Cochran and Ann Sheridan. In fact, my chief problem with Key Largo is that I wanted the villain to pulverize the hero. Needless to say, that was not meant to be. Even so, Key Largo is a solid film noir, boasting a handful of outstanding performances – in addition to Robinson, there’s Thomas Gomez and a magnificent Claire Trevor, who deservedly won a best supporting actress Academy Award. (Trevor’s drunken singing alone would have merited her the Oscar; Robinson, by the way, was never even nominated for the award though he received a posthumous honorary Oscar in 1974.)

Another one that I’d recommend is Nightmare, a B “supernatural” thriller – about hypnosis and murder – now unjustly forgotten. Much like the 1948 Robinson vehicle Night Has a Thousand Eyes, which revolves around clairvoyance and evil deeds, Nightmare isn’t a great film. Even so, I find it considerably more intriguing than the vast majority of “classics” of the period. Kevin McCarthy, the hero of Invasion of the Body Snatchers, co-stars. (I should add that Robinson’s career was severely damaged by the post-war anti-Red hysteria; by the early 1950s, he was reduced to playing leads in B movies.)

One curiosity: Dr. Ehrlich’s Magic Bullet is a stolid, pompous, over-produced biopic that has Edward G. Robinson at his weakest. I mean, his performance is still charismatic – even though Maria Ouspenskaya nearly manages to steal her brief scenes – but for once I found Robinson’s portrayal a notch below the level of 100 percent honesty I’d come to expect. (Robinson claimed he was playing his father; see below.) In any case, perhaps it was director William Dieterle’s fault, as he was the man responsible for the 1930s Warner Bros. bio-atrocities starring the highly mannered Paul Muni. (Dr. Paul Ehrlich’s Magic Bullet was supposed to destroy syphilis, an unmentionable disease during the Production Code era. By emphasizing the serious nature of the film, Warners succeeded in having the disease named at a memorable dinner scene in which Ouspenskaya horrifies her fellow diners.)

Here’s Edward G. Robinson as quoted in his autobiography, All My Yesterdays, put together by Leonard Spigelgass, and published posthumously in 1973.

“While doing Ehrlich, the world outside seemed to vanish, or at least diminish in importance. During the filming I kept to myself, studied the script, practiced gestures before the mirror, read about his life and times, studied pictures of the man, tried to put myself in his mental state, tried to be him.

“As we shot the film, I realized more and more that I was being a highly idealistic version of my father. Had my father been German [he was Romanian], had he been a doctor, had he been passionate about science, I think he would have been a Dr. Ehrlich. So what you see now on the television screen (and you don’t see it nearly as often as the gangster films) is Emanuel Goldenberg [Robinson’s real name], via E.G.R., playing his father, if his father were Dr. Ehrlich or, conversely, if Dr. Ehrlich were his father.”

I Am the Law, which Robinson did at Columbia in 1938, is a TCM premiere. Barbara O’Neil, poor Charles Boyer’s mad wife in All This and Heaven Too, is the leading lady. Alexander Hall, whose screen credits include Here Comes Mr. Jordan and My Sister Eileen, directed.

10:30 AM Destroyer (1943)
The crew of a torpedoed ship fights to take out an enemy sub. Cast: Edward Robinson, Glenn Ford, Marguerite Chapman. Director: William A. Seiter. Black and white. 99 min.

3:30 PM I am the Law (1938)
A law professor signs on as special prosecutor to take on the mob. Cast: Edward G. Robinson, Barbara O’Neil, John Beal. Director: Alexander Hall. Black and white. 83 min.

There was a movie in which a woman was in love with Bogart’s character. The woman was married to Edward G Robinson’s character. Robinson’s character killed the woman in the courtroom. Please tell me the name of this movie. I may be mistaken and the other actor was James Cagney. I once saw the movies over 30 years. It was a great movie and I would love to see it again. Please help me.

edward g. robinson played in a movie as a clairvoyant please help me out thank you.

John Farrow’s “Night Has a Thousand Eyes” 1947 with Gail Russell.
He also got involved with some weird stuff in “Nightmare” 1956 with Kevin McCarthy.