Steve Montgomery 10 years ago
Melancholia with Kirsten Dunst. The European Film Academy (EFA) Awards’ Best Film winner, Melancholia tells the story of two sisters (Kirsten Dunst, Charlotte Gainsbourg) as one of them is about to get married and a fast-approaching small planet is about to collide with the Earth. Melancholia became the third Lars von Trier film to win EFA’s top award, following Breaking the Waves (1996) and Dancer in the Dark (2000) – this despite the fact that the filmmaker became embroiled in a nasty controversy after making jokes about Jews and Adolf Hitler at this year’s Cannes Film Festival. Von Trier himself has taken home one Best European Director award, for Dogville in 2003.
Contents hide
1. ‘Melancholia’ tops EFA Awards: Work by a controversial filmmaker gets top prize for second year in a row
1.1. Critical favorite
1.2. Roman Polanski replay
1.3. EFA’s yesteryear hits: In a Better World & The King’s Speech
1.4. Best Actress Tilda Swinton as mother of mass murderer
1.5. Oscar favorite ‘The Artist’ takes home one single EFA Award
1.6. EFA honorees Stephen Frears & Mads Mikkelsen
1.7. Surprise Lifetime Achievement Award recipient Michel Piccoli
1.8. EFA Awards: Winners & nominations

‘Melancholia’ tops EFA Awards: Work by a controversial filmmaker gets top prize for second year in a row

Lars von Trier may have made some new enemies at this year’s Cannes Film Festival, but he surely still has a number of friends and admirers at the European Film Academy (EFA). Von Trier’s apocalyptic family drama Melancholia, starring Best Actress EFA nominees Kirsten Dunst (an American who recently acquired German citizenship) and Charlotte Gainsbourg, was named Best European Film at the 2011 EFA Awards, held in Berlin on Dec. 3.

“I don’t have a message from Lars for you because he has stopped making public statements,” said one of the Melancholia producers while accepting the award. “I can’t imagine why.”

Von Trier’s “I feel for Hitler” joke at a press conference in Cannes was perceived as anti-Semitic by some. As a result, the director was officially banned from the festival. Danish police, on behalf of French authorities, later questioned him as well.

See further below the full list of this year’s EFA Award winners and nominations.

A Best Film runner-up at the New York Film Critics Circle Awards, Lars von Trier’s latest has little chance of creating much Oscar buzz. Reviews, however, have been generally quite positive. Melancholia has an 80 percent approval rating and 7.2 average among Rotten Tomatoes‘ top critics.

At the request of U.S. authorities, the Rosemary’s Baby and Chinatown filmmaker was arrested on three-decade-old rape charges in September 2009 in Zurich, where he was held in jail for two months before being placed under house arrest at his chalet in Gstaad. Swiss authorities declared Polanski a free man in July 2010.

EFA’s yesteryear hits: In a Better World & The King’s Speech

But wait … Wasn’t In a Better World in competition last year? Nope. You’re thinking of the Academy Awards.

Due to its funky release schedule rules, the EFA Awards are oftentimes behind the Oscars. Earlier this year, In a Better World was named the Best Foreign Language Film Oscar winner.

Jean Dujardin seemed poised to take home the 2011 Best Actor EFA Award for Michel Hazanavicius’ silent comedy-drama The Artist – one of the most talked-about films and performances this awards season – but that didn’t happen, as enough EFA members opted instead for Hooper’s year-old hit in the Best European Actor and Best European Editor (Tariq Anwar) categories.

And so did enough European moviegoers, as The King’s Speech nabbed the People’s Choice Award.

Colin Firth, unsurprisingly, wasn’t around to pick up his EFA statuette. Four years ago, fellow royal British performer Helen Mirren, named Best European Actress for The Queen nearly a year after her Oscar win, was also absent from the European Film Awards ceremony. 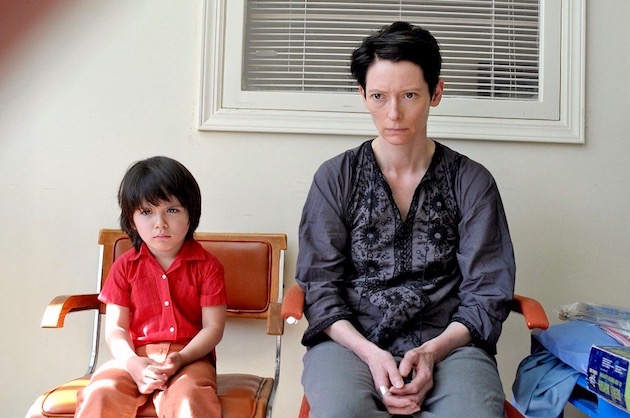 We Need to Talk About Kevin with Tilda Swinton and Rock Duer. Directed by Lynne Ramsay, who also adapted – with Rory Stewart Kinnear – Lionel Shriver’s 2003 novel, We Need to Talk About Kevin stars Tilda Swinton as the mother of a high-school mass murderer. A former travel writer, the woman spends her days attempting to reconstruct her life with her son. Ezra Miller plays the demented teenager; Rock Duer (pictured) and Jasper Newell are his younger, pre-mass-murder selves. John C. Reilly is the dad who provides his son with the mass murder weapon.

In addition to Lars von Trier’s Melancholia, did any new European movies win any EFA Awards? However surprising, the answer is Yes.

Tilda Swinton, whose We Need to Talk About Kevin was screened at the Cannes Film Festival, was the Best Actress winner. (As mentioned above, Kirsten Dunst was the Cannes jury’s pick for Melancholia.)

Directed by Lynne Ramsay, We Need to Talk About Kevin stars Swinton as the mother of a youthful mass murderer. Just like fellow Britisher Colin Firth, Swinton was absent from the ceremony.

Clearly with an eye on the Academy Awards, We Need to Talk About Kevin opens in Los Angeles and New York City on Dec. 9.

The Artist, a favorite for the 2012 Oscars, won a single EFA Award: for Best European Composer Ludovic Bource, who thanked the film’s perky dog, Uggie, for providing the necessary inspiration.

Writer-director Michel Hazanavicius and actress Bérénice Bejo weren’t even nominated, while star Jean Dujardin, as pointed out above, lost to Colin Firth.

Among the other EFA 2011 winners were: 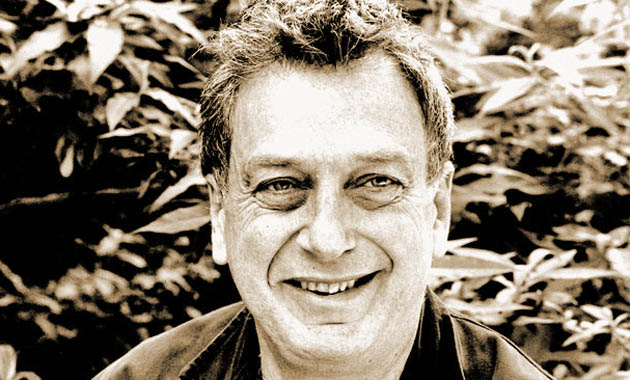 “I’m not an auteur and I make cheerful films because I can’t stand the misery anymore,” declared the 70-year-old Frears during his acceptance speech. “I’m just a bloke who makes films and hopes the audience likes them. And I’ll try to do better next time.”

To date, Frears has been nominated for only one Best European Director award, for The Queen. At the Oscars, he has been shortlisted twice, for both The Queen and The Grifters (1990).

Reports vary as to who received the loudest applause at the ceremony: Stephen Frears or Michel Piccoli. The latter will be turning 86 next Dec. 27.

See below the full list of EFA winners and nominations.

Best European Film
The Artist.
In a Better World.
The Kid with a Bike.
The King’s Speech.
Le Havre.
* Melancholia.

Best European Production Designer
Paola Bizzarri, We Have a Pope.
Antxón Gómez, The Skin I Live In.
* Jette Lehmann, Melancholia.