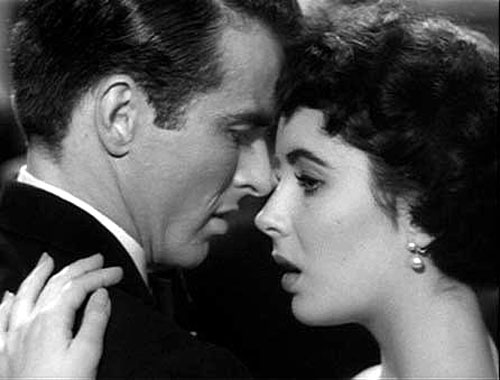 Elizabeth Taylor movies: A Place in the Sun with Montgomery Clift.

Elizabeth Taylor can be found in 11 movies to be presented on Turner Classic Movies on Monday, Aug. 23, as part of TCM’s “Summer Under the Stars” series. (See below TCM’s full Elizabeth Taylor schedule.]

Curiously, even though Taylor is one of the biggest movie stars ever, she did appear in a few (to the best of my knowledge) still hard-to-find titles. Is Franco Zeffirelli’s Young Toscanini (1988) available on home video in the US? Are Night Watch (1973) and Ash Wednesday (1973) easily available?

Unfortunately, none of those titles will be shown on TCM, but there’s one that most people probably haven’t heard of despite its stellar cast: Brian G. Hutton’s X, Y & Zee (1971), a bizarre psychological drama in which Taylor co-stars with Michael Caine and Susannah York.

Though hardly what I’d call a great film, X, Y & Zee is an intriguing, cynical portrayal of dysfunctional human relations: married couple Caine-Taylor, lovers Caine-York, and seducer/seducee Taylor-York. It’s definitely worth a look, especially since both Taylor and York are excellent. As a plus, the supporting cast includes Margaret Leighton and John Standing.

In spite of Joan Bennett’s presence, Vincente Minnelli’s Father of the Bride (1950) is the sort of family movie that could only be saved by an invasion of flesh-eating zombies. As far as I’m concerned, the old MGM’s Andy Hardy sensibility is the stuff that nightmares are made of.

On the other hand, Life with Father (1947) – a Warner Bros. release – has enough oddball humor to make it quite enjoyable. The fact that the film’s production values are first-rate, and that William Powell (as the unreligious father) and Irene Dunne are in top form surely helps.

Clarence Brown’s National Velvet (1945) left me cold, but Fred M. Wilcox’s Lassie Come Home (1943) left me misty-eyed. I cared more about that collie than about most humans in most MGM movies. Ah, I cared about two-legged Dame May Whitty, too.

Taylor is both beautiful and surprisingly effective in George Stevens’ A Place in the Sun (1951), co-starring Montgomery Clift and Shelley Winters. (Despite a Best Actress Oscar nomination, she was less effective in another pairing with Clift, Raintree County, MGM’s attempt to create a second Gone with the Wind. Clift’s disfiguring car crash took place during filming.)

Taylor is less beautiful but even more effective in Mike Nichols’ Who’s Afraid of Virginia Woolf? (1966, right), the kind of family movie that requires no zombies.

In fact, I’d say the complex, engrossing, disturbing Who’s Afraid of Virginia Woolf? probably hasn’t aged one day since it first came out nearly half a century ago.

Elizabeth Taylor was reluctant to star in Daniel Mann’s Butterfield 8 (1960), the film that was to eventually win her a Best Actress Academy Award. (Taylor would win her second Oscar statuette for Who’s Afraid of Virginia Woolf?)

“It’s a terrible mean thing they’ve done to me,” the MGM contract player told UPI. “They have the power to keep me off the screen for the next two years unless I agree to do Butterfield and it looks as if that’s what they’re going to do.”

Taylor finally agreed to star as the tragic high-class sex worker Gloria Wandrous so she could be free to travel to Rome to film Cleopatra for 20th Century Fox.

Her co-stars in Butterfield 8 were Laurence Harvey, nominated for a Best Actor Oscar for Room at the Top (1959), and Eddie Fisher, whom Taylor had married following a scandalous affair – when it all started, Fisher was Debbie Reynolds’ husband.

Butterfield 8 turned out to be a box office success, but reviewers were unimpressed. Yet, that year enough Academy members felt Taylor gave the best performance by an actress in a leading role that the actress found herself among the five nominees for 1960’s Best Actress Oscar.

A serious illness that led to a tracheotomy all but guaranteed her the statuette. According to Damien Bona and Mason Wiley’s Inside Oscar, fellow nominee Melina Mercouri considered asking the other Best Actress nominees – Deborah Kerr, Shirley MacLaine, and Greer Garson – to drop out of the race with her so Taylor could win unanimously, but ultimately decided against the idea.

Mercouri explained: “I was afraid to suggest it because then everyone would think I was just trying to make publications.”

10:45 AM A Place in the Sun (1951)
An ambitious young man wins an heiresss’ heart but has to cope with his former girlfriend’s pregnancy. Cast: Montgomery Clift, Elizabeth Taylor, Shelley Winters, Anne Revere. Director: George Stevens. Black and white. 122 min.