Emma Thompson back as Gareth Peirce?

Two-time Oscar winner Emma Thompson may once again play human rights lawyer Gareth Peirce, according to Screen Daily. Nearly twenty years ago, Thompson played Peirce in Jim Sheridan’s Academy Award-nominated In the Name of the Father (1993, right), in which she defended Daniel Day-Lewis and several others accused of being IRA terrorists. For her efforts – the accused are eventually released – Thompson earned a Best Supporting Actress Oscar nod.

Despite sharing several elements with Sheridan’s movie, this new project is not called In the Name of the Father 2 (or In the Name of the Mother, for that matter). Described as a romantic thriller, The Secret Evidence tells the story of “a young British couple mistakenly caught up in the war on terror who turn to Thompson’s character to get one of them out of prison. However, in fighting for her boyfriend’s freedom, the film’s young female lead finds herself and her family subject to attack from the UK Government’s secret service.”

Nicholas Racz, whose sole feature film to his credit is the 2002 thriller The Burial Society, is attached to direct The Secret Evidence. Racz also co-wrote the film’s screenplay with Cerie Bullivant, who based the script on his own story: he was held under house arrest for two years “for suspected involvement in terrorism, which was never proved.” Peirce was his attorney.

If funding for the $6-$8 million movie comes through, filming should commence sometime in the fall.

And when the inevitable Julian Assange movie gets made, here’s wondering if Thompson will return as Peirce, who has represented Wikileaks’ Assange during his tribulations with the law.

Emma Thompson may be possibly reprising her role as human rights lawyer Gareth Peirce. Flashback to the 1993 Academy Awards.

In early 1994, Thompson was nominated for two Oscars: as Best Actress for James Ivory’s social/psychological drama The Remains of the Day (photo) and as Best Supporting Actress for Jim Sheridan’s family melodrama / political & prison drama In the Name of the Father.

That same year, Holly Hunter was another double nominee – the first (and to date only) time two performers have been in the running in two acting categories in the same year. Hunter was up for the Best Actress Oscar for Jane Campion’s The Piano and as Best Supporting Actress for Sydney Pollack’s The Firm. She eventually won for The Piano; she and Thompson lost in the Best Supporting Actress category to The Piano‘s Anna Paquin.

Some have claimed that these double-double nominations means that women were truly having a hard time finding roles in movies in the early ’90s. After all, why else would Academy members nominate the same two actresses in two different acting categories?

Well, to see things through that perspective might be politically correct, but it would also be totally missing the point.

For starters, double acting nominations have absolutely no correlation to a dearth of good roles for actresses (or actors, for that matter). A quick look at the 1992 nominations shows that Al Pacino was shortlisted for two movies: in the supporting category for James Foley’s Glengarry Glen Ross and as a lead for Martin Brest’s Scent of a Woman. In 1944, Barry Fitzgerald was shortlisted in both categories for one movie: Going My Way. Now, would anyone in his/her right mind say that there were few important roles for men in American movies in the early ’90s or the mid-’40s?

Here’s another example: Within a five-year period, Fay Bainter and Teresa Wright were both shortlisted in two acting categories. In 1938, Bainter was in the running for White Banners (lead) and Jezebel (supporting); in 1942, Wright was nominated for The Pride of the Yankees (lead) and Mrs. Miniver (supporting). Now, only someone with no knowledge whatsoever of film history would think that women had few significant roles in Hollywood movies of the late ’30s/early ’40s.

Thompson’s and Hunter’s double nominations could be easily (and accurately) explained by the fact that Academy members love stars, whether new or old, from the movies or the stage or television. Among the (male) stars who have been shortlisted in the Best Supporting Actor categories are Michael Caine (Hannah and Her Sisters, The Cider House Rules), Sean Connery (The Untouchables), Jack Nicholson (Terms of Endearment, A Few Good Men, in addition to a pre-stardom nod for Easy Rider), Ethan Hawke (Training Day), Morgan Freeman (Million Dollar Baby), Paul Scofield (Quiz Show), and Fred Astaire (The Towering Inferno).

Although one could easily argue that women are underrepresented in mainstream Hollywood movies (perhaps even in American movies, period), double Academy Award nominations in the acting categories should not be a part of that argument for they have no connection to either political incorrectness or gender inequality. Instead, they are the result of the Academy’s perennial love affair with Hollywood (and Broadway) stars.

Nothing is as cool and hip and glorious as war, if trailers for The Avengers, John Carter, and Battleship (please scroll down) are to be perceived as reflections of reality – or at least of our cultural landscape. In The Avengers, Tom Hiddleston’s Loki is the enemy (well, at least one of them); in John Carter, the enemies are mean, ugly sons-of-bitches Martians (I think); in the board-game-inspired Battleship, the enemies are robot-aliens suspiciously similar to the metallic creatures found in the Transformers movies.

In fact, the Battleship trailer shown during the Super Bowl has a building collapsing much like what takes place in Transformers: Dark of the Moon. But in case you’re too trailered out to get the similarities between the new Peter Berg movie and the old Michael Bay franchise, Universal tells you in big, bold letters that Battleship comes courtesy of “Hasbro the company that brought you TRANSFORMERS.” Or perhaps it could be that Universal felt the need to hammer that message in because the studio was afraid prospective patrons might think that Battleship is a talkie remake of Sergei Eisenstein’s political drama Battleship Potemkin. (Personally, The Artist or no, I don’t believe they should have been too concerned about that, but that’s just me.) 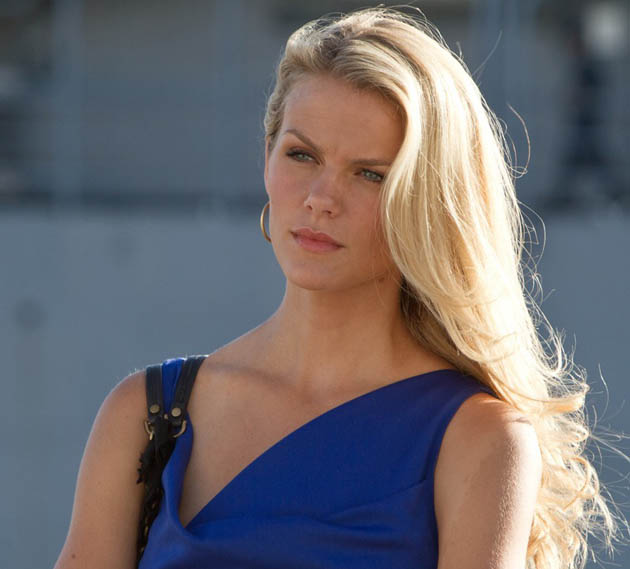 Brooklyn Decker in ‘Battleship’ movie: From Here to Burrito with Taylor Kitsch.

In the Battleship clip below, you get to see John Carter star Taylor Kitsch making a wish – it’s his birthday, after all. One assumes Kitsch is wishing he’ll get lucky with What to Expect When You’re Expecting actress Brooklyn Decker, who has just ordered a chicken burrito at the local dive. Or perhaps his birthday wish is that Decker will give him her burrito; it’s a bit unclear. The kitchen is closed. She herself may not get a burrito – at least not a fresh one.

But surely a $200 million action movie based on a Hasbro board game can’t be about any burrito drama. Or about unwashed, long-haired men hitting on sparkling, meticulously coiffed women.

But then again, $200 million action movies can’t just offer two hours of nonstop action, can they? There must be some “character development,” however marginal. Hence scenes such as the one below.

An ugly job or a beautiful girl? The U.S. Navy or (lowly) U.S. unemployment benefits?

Careful what you wish for.

Why bother with romance and burritos?

You’ll see scenes such as the one above until the day some Hollywood studio genius realizes that $200 million action movies not only can, but actually should feature only action scenes, since people who go to these movies couldn’t care less about cardboard characters. Or complex ones, for that matter.

Directed by Peter Berg, Battleship The Movie was written by Erich Hoeber and Jon Hoeber. Besides Brooklyn Decker and Taylor Kitsch, the cast includes:

Battleship opens in the U.S. and Canada on May 18, ’12. Unsurprisingly, the actioner is already doing solid business overseas.

As an aside, prior to her two 2012 releases, Brooklyn Decker was seen in only one movie: the poorly received Adam Sandler-Jennifer Aniston moderately successful comedy Just Go with It, a remake of Cactus Flower and a sort of 10 variation with Decker in the old Bo Derek role.

Considering that Peter Berg’s Battleship looks like nothing more than a big-screen videogame (scroll down for the Battleship clip), it’s kinda surprising that it actually has an “official synopsis”:

In the Hawaiian Islands, an international naval fleet at Pearl Harbor engage in a dynamic and intense battle against an alien species known as “The Regents.” The aliens come to planet Earth on a mission to build a power source in the ocean. Upon their visit, they come in contact with the naval fleet. The film is also purported to show both sides of the story, from the aliens’ perspective, as well as the humans’ so the audience knows exactly where the opponent’s ships are.

I’m not sure if that means we’ll also know who the aliens and/or the humans are. Or whether or not we should care.

Well, don’t expect Battleship to win any screenplay awards come awards-season time, but do expect it to be remembered when guilds and the Academy make their selections for achievements in technical categories such as Best Sound Mixing or Best Visual Effects.

“If I’m not me, then who the hell am I?” That sounds like a line from Alan Parker’s Angel Heart, in which Mickey Rourke plays a guy possessed by Robert De Niro. Or perhaps something out of Carl Reiner’s All of Me, in which Steve Martin gets (sort of) possessed by Lily Tomlin.

But no. Colin Farrell is the identity-challenged guy in this year’s Total Recall remake, whose trailer (please scroll down) was released today. Are his memories his own or have they been implanted? If they’re not his own, is he still himself or has he become someone else?

Now, don’t expect to much philosophical questioning in Len Wiseman’s remake of Paul Verhoeven’s classic-ish sci-fi/thriller. At least if the trailer is any indication of what the movie will be like: a big-screen videogame featuring big weapons, hot women, nonstop action, and elaborate production design.

But will you have any memory of Total Recall five minutes after you’ve watched it?

Wiseman, who had previously directed Beckinsale in Underworld, returns behind the camera for the first movie since Live Free or Die Hard (2007). The film’s screenplay is bMark Bomback, James Vanderbilt, and Kurt Wimmer.

Screen legend Catherine Deneuve was honored by the Film Society of Lincoln Center at a gala ceremony held this evening in New York City. Deneuve is the 39th recipient of the Film Society’s Chaplin Award. In the above photo, she is seen with her daughter Chiara Mastroianni. (Needless to say, Marcello Mastroianni was the father.) [Full list of Chaplin Award Honorees.]

Deneuve is only the fourth “non-Hollywood star” to receive the Chaplin Award. Her predecessors were Yves Montand (1988), Alec Guinness (1987), and Federico Fellini (1985).

Typical Hollywood take a classic movie and throw hundreds of million of dollars at a remake and hope it will be better then the original. The classic Total Recall with Arnie was the best and will remain one of the best sci-fi movies of the last twenty years.

LOL! You make that judgement based on a trailer? What the hell? Did you actually see the original? There was no philosophical question in the original either. It was B-movie action shlock, which is usually what Arnold made.