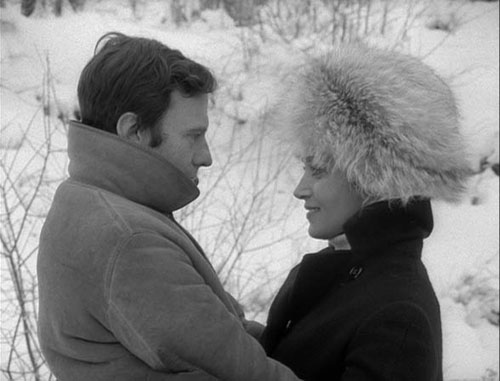 Tonight begins the Los Angeles County Museum of Art‘s series “The Tales of Eric Rohmer,” which will screen eleven of the veteran filmmaker’s films every weekend until September 27.

Of the several Rohmer efforts I’ve seen that will be presented at LACMA, I particularly recommend A Summer’s Tale and Autumn Tale, both part of Rohmer’s Tales of the Seasons, set in different times of year, in different areas of France. Both films look deceptively simple, but in their subtle, slice-of-life approach they are as profound and complex as life itself. That, in fact, is Rohmer’s personal touch: the ability to show life’s many intricate threads through “mundane” day-to-day activities.

LACMA’s press release explains that “Eric Rohmer, editor-in-chief of Cahiers du cinema from 1956 to 1963, made his first feature in 1959 and, at age eighty-seven, has just completed his final film [the none-too-enthusiastically received Romance of Astree and Celadon]. Eschewing the genre influences beloved by his New Wave contemporaries, Rohmer’s oeuvre deals exclusively with the drama of intimate relationships. His plots are in the classical mold – they have the precision and sly wit of a Molière comedy – and are driven by the endless misunderstandings that his cerebral characters, aided by meddlesome friends, allow to complicate their happiness. Like melodies and motifs recurring in different keys, each new entry in Rohmer’s canon enriches the total experience.”

Also not to be missed: the chatty, Academy Award-nominated My Night at Maud’s (top photo); The Lady and the Duke, for which digitally made “virtual sets” inspired by historical paintings were used so Rohmer’s characters could “walk through the streets and squares of a Paris that no longer exists”; and the highly successful dramatic comedy Pauline at the Beach.

Having determined to marry a demure young blonde whom he has been intently observing for weeks at Sunday Mass, Trintignant, an engineer in Clermont-Ferrand on business and stranded by a blizzard, gratefully accepts a spare room for the night in the home of worldly Fabian, an attractive divorcee. During a spirited conversation that extends late into the night, Fabian challenges Trintignant’s conservative beliefs and smug assumptions about life and love before revealing that she has no spare room. Rohmer’s first international hit was Oscar-nominated for Best Foreign Language Film and Original Screenplay.

A headstrong art student living in Le Mans decides that marriage is the solution to her romantic problems with married men, but the bachelor she chooses to pursue responds with a bewildered disinterest. “A beautifully acted comedy of humiliation.” – Roger Ebert.

Set in the Alpine city of Annecy and photographed by the great Nestor Almendros, this seductive film focuses on a soon-to-be-married diplomat (Brialy) vacationing in the French Alps who develops an obsession with the beautiful sixteen-year old friend of a friend, in particular her knee. Like Jane Austen, Rohmer diverts the audience with witty narration and clever characters, but the real subjects of his fifth Moral Tale are male mid-life crises and adolescent sexuality. Will Brialy caress Claire’s knee by summer’s end, as he has vowed to do, or remain faithful to a fiancée we never meet?

Desire and betrayal take on a life-and-death urgency in this adaptation of an eighteenth-century German novella about a marquise that is rescued from a sexual assault on her own estate by a visiting Russian count who becomes obsessed with her. Acclaimed for its authentic neoclassical design, the performances of Ganz and Clever, and its narrative surprises, Rohmer’s only non-francophone film won the Grand Jury Prize at Cannes.

Adrien (Bauchau) a self-absorbed art dealer in his mid-thirties, is surprised to find he is sharing a borrowed villa on the Riviera with housemates: Daniel, a friend; and Haydée, an energetic twenty-year-old beauty whose nightly bouts of bars and promiscuity drive the guys (whom she barely notices) so crazy that they vow to steer her onto life’s higher moral path. Shot on a low budget but graced with a sexy cast and Nestor Almendros’ dazzling images of the Mediterranean coast, La Collectioneuse created the mold for a Rohmer specialty: the “vacation film.” “The film’s mood of sardonic playfulness combines with a psychological concentration and a Warholian feeling for pose and emptiness that are unique in Rohmer’s work.” – Chris Fujiwara, Boston Phoenix.

The proverb ”A wagging tongue bites itself,” by the twelfth-century poet Chrétien de Troyes, sent Rohmer (and Almendros) back to the beach sixteen years after La Collectioneuse – this time to chilly Normandie in late August – to direct what became his most commercially successful film, a farce with tragic undertones. Five adults, three women and two men, indulge in a game of musical beds that, fueled by gossip, bad judgment, and self-justification, ruins everyone’s vacation and more. Only fifteen-year old Pauline is spared a broken heart but the disdain she feels toward the adults marks the end of her innocence.

Louise, a charming but complicated young interior decorator who lives with her boyfriend in his flat outside Paris, suddenly announces that her “identity” depends on living alone half the week in the city; but she is soon overwhelmed by the practical complications of her decision. Only twenty-five at the time, Pascale Ogier was widely acclaimed for her riveting performance in the role of Louise, winning the Best Actress award at the Berlin Film Festival. And Full Moon, with its urban setting and bittersweet portrayal of a woman coping with friendship, career, and independence, is Rohmer’s contemporary version of the traditional proverb: “He who has two women loses his soul; he who has two houses loses his mind.”

Rohmer’s fascination with the sentimental education of young people deepened with age and the second of his Moral Tales is a comic masterpiece about a college student on vacation in Brittany who, through a series of chance encounters and misunderstandings, becomes involved with three women. “Plotting as suspenseful and manipulative as classical farce… Rohmer provides insights into matters of love, friendship, fidelity, loneliness, luck, destiny, and desire.” – Time Out.

When her roommate cancels their planned trip to Greece right before the August holiday, Delphine, a Parisian secretary, is devastated; unwilling to be alone in Paris, she attempts to vacation in Cherbourg, Biarritz, and the Alps, but her self-pity and negativity drive away potential friends, and she finds a reason to leave. Denying the rejection and masking her deep loneliness, she dreams of meeting “the perfect man” during the remaining two weeks of her vacation… In a radical departure from Rohmer’s intricate plotting, crisp imagery, and polished dialogue, Summer was made on 16mm with a small crew and no script – the actors improvised their roles – resulting in one of the director’s most esteemed and emotionally powerfully films. “A stunning mix of everyday naturalism and metaphysical speculation, the film is a masterpiece.” – Geoff Andrew.

The final entry in the Seasons cycle is set in the Rhône Valley during the wine harvest and concerns the complications that arise when a fortyish widow named Magali learns that her best friends are trying to find her a new husband by placing ads in the personals in her name. Rohmer favorite Béatrice Romand is brilliant as the earthy, high-strung loner who prefers to tend her vines in peace but comes to accept the bounty life offers. In the spirit of the season, the film “evokes such a sensuous atmosphere that you are all but transported into Magali’s fields. A rich, emotionally satisfying experience.” – New York Times.

The Lady and the Duke (L’Anglaise et le duc)

The lady is Grace Elliott, a Scottish-French aristocrat living in Paris during the French Revolution, and the duke is the Duc d’Orléans, Grace’s former lover and an enlightened aristocrat sympathetic to the revolution. Each worries about the other’s safety and, as their story unfolds from 1790 to 1794, they debate the pros and cons of revolution, specifically the bloody days of the Terror, in a series of elegantly conceived scenes that blend the personal with the political. A faithful adaptation of Elliot’s memoirs, the script portrays a woman of great courage who risked her life to save lives: the scene where she hides the governor of the Tuilleries in her home and her nocturnal escape from Paris on foot are classic suspense sequences that convey the omnipresent danger for rich and poor alike. Wanting the characters to walk through streets and squares of an eighteenth-century Paris that no longer exists, Rohmer commissioned digital sets based on nineteenth-century landscape paintings: the fantastic images evoke the magic of early cinema and lend this classically romantic film a theatricality that is entirely appropriate.

Michel Serrault: ‘La Cage aux Folles’ & ‘Get Our Your Handkerchiefs’