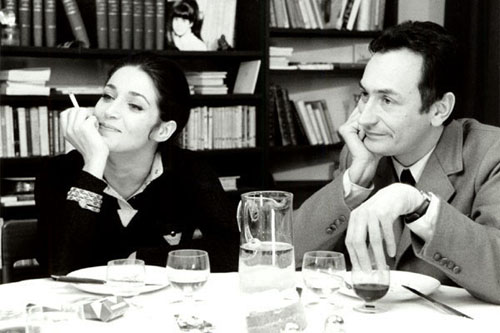 My Night at Maud’s with Françoise Fabian and Antoine Vitez: Eric Rohmer classic.

To watch an Eric Rohmer film is to watch life unfold on the screen. I’m not sure if Rohmer, who died earlier today at the age of 89, would be happy to have his oeuvre described as such, but that’s exactly what it felt like to me while watching, say, Autumn Tale (1998), Boyfriends and Girlfriends (1987), or My Night at Maud’s (1969).

Not much seemed to be happening on-screen: people talked, kissed, fought, made up, talked some more, laughed, drank, had sex, went out, talked some more. The strange thing is, this peeping tom didn’t want most of those films to end. Just like I don’t want life to end.

Now, I’ve never been a big fan of the French New Wave – much to the contrary. I’d rather watch something like Avatar or even The Twilight Saga: New Moon than most of the films Jean-Luc Godard or François Truffaut made in the 1960s. Rohmer, though one of the founders of the New Wave, was different; in most of his work there was none of the artifice that, as far as I’m concerned, makes a number of the New Wave films all but unwatchable.

In fact, one frame in, say, Autumn Tale has more truth and genuine feeling than you’ll likely find in all ten best picture Oscar nominees put together. This “natural” quality isn’t something I can describe in words. Just like I can’t describe love or hate or fear or desire in words. It’s a feeling; something that’s as much inside me as it is on screen. Perhaps it’s all inside me, but it’s there; it’s real. That’s more than I can say about the vast majority of Hollywood movies.

Born in 1920, Rohmer began directing in the early ’50s. Among his most renowned efforts are Berlin Film Festival Silver Bear winner La collectionneuse (1967); My Night at Maud’s (1969), an international sleeper hit that earned an Academy Award nomination for best original screenplay; and the scandalous The Marquise of O (1976).

When I learned of Rohmer’s passing about half an hour ago, the first thought that came to mind was: Why in hell do new filmmakers want to become the next Quentin Tarantino or the next James Cameron, but not the next Eric Rohmer? Just a rhetorical question.

The second question that came to mind – not a rhetorical question – was: Rohmer was a marvelous portraitist of heterosexual relationships. Where oh where is his gay equivalent?

Jane Birkin Style: To Bare or Not to Bare

Dino Risi Movies: Scent of a Woman + The Easy Life

Luca Guadagnino may be the closest thing to a gay equivalent….

That is a very good question: Why new filmmakers want to be the next Tarantino or Cameron, but not Rohmer?

Whilst I have always been interested in the New Wave directors, over the years I have found that many of their films have not aged well, with the exception of la Varda and Rohmer. I am not going to mention which one of his films is my preferred: they all are. Life is. It is the humanity of his study of character that I find so endearing, without the coldness of, for example, Haneke’s early films.

What a wonderful article, I feel the same way about Rohmer. I like Truffaut, and Varda, and some of Resnais work, but Rohmer is really the only director i can connect with, over and over.
All the other new wavers leave me kinda cold.
I am almost sure I know the scene you’re describing in AUTUMN TALE, where Gerald approaches Magali for the first time at the wedding and she askes if she can pour him a glass of wine. That scene is so pregnant with all sorts of emotions. There is an art to what Rohmer does and its beautiful.