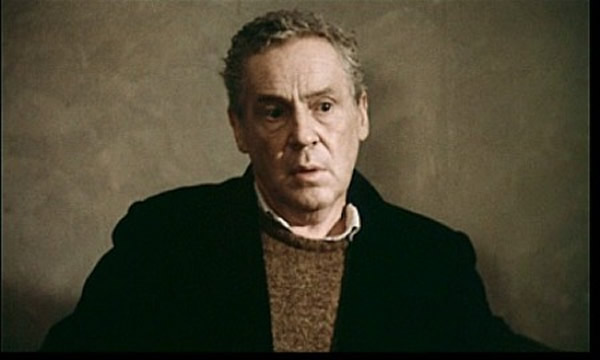 Erland Josephson, who was featured in more than a dozen Ingmar Bergman movies in addition to several plays directed by Bergman, died of complications from Parkinson’s Disease on Feb. 25 in Stockholm. Josephson was 88.

Even though most of Bergman’s best-known players were women – Liv Ullmann, Bibi Andersson, Ingrid Thulin, Harriet Andersson, Ulla Jacobson – the director frequently worked with the same male actors as well. Max von Sydow, a Best Supporting Actor nominee this year for Stephen Daldry’s Extremely Loud and Incredibly Close, is the only one to have become internationally renowned. But among Bergman’s recurring collaborators were also the likes of Gunnar Björnstrand and the Stockholm-born stage actor Erland Josephson.

Perhaps Josephson failed to become an international star because he played supporting roles in most of his Bergman films, while his few leads for the filmmaker were generally subordinate to the leading ladies’ roles, e.g., Face to Face (1976), a movie that belongs to Liv Ullmann as a psychiatrist suffering a nervous breakdown, and Autumn Sonata (1978), which is dominated by Ullmann and Ingrid Bergman as, respectively, daughter and mother stuck in a highly dysfunctional relationship.

Josephson himself claimed he wasn’t interested in film work until his featured role in Cries & Whispers in 1972. By then, he was 49 years old.

Of the Erland Josephson movies I’ve seen (and that includes Bergman’s much-admired Scenes from a Marriage), his most memorable role was not in a Bergman film but in Andrei Tarkovsky’s Offret / The Sacrifice, winner of the Cannes Film Festival’s Grand Prix (the festival’s runner-up award). In fact, Josephson was the very core of Tarkovsky’s disturbing, dream-like drama about a man looking for salvation – his own, the planet’s – as World War III begins.

Josephson’s only major competitive award – a Best Actor Guldbagge, the Swedish equivalent of the Academy Award – was given him for his performances in both The Sacrifice and Mai Zetterling’s Amorosa. He would also go on to receive a Lifetime Achievement Award from the Stockholm Film Festival in 2002 and an Honorary Guldbagge in 2004.

About his work with Bergman and elsewhere, Josephson had the following to say:

“In Bergman’s world I represented a sort of intellectual, skeptical, ironic person, rather cold and frustrated. When I went abroad and made films in Italy and other places, I was used in different ways. I was rather often cast as crazy people, maniacs. It was very good for me and it was fun because it is nice to play crazy people if you are not in reality. And I think perhaps that changed how Ingmar saw me. Suddenly I was on the more magical side of his world, playing the people with fantasies, variety, the artists.”