Twenty-first century moviegoers don’t understand Esther Williams, and you get funny looks when you try to explain her appeal. Why on earth would you go to the movies just to see someone swim? It must be admitted that, as an attraction, Williams’ aquatic frolicking is not exactly Indiana Jones fleeing a runaway boulder. But it’s important to remember that in a world before anyone had access to so much as a football game a week, the opportunity to watch any feat of athleticism was a rare thing.

Movie audiences’ need to see physical dynamism was taken for granted by studios, producers, and directors in the pre-television age; meeting this need led to many of the glories of classic Hollywood, such as … Well, even the back-of-the-class, computer-solitaire junkies raise their hands here and call out “Musicals! Musicals!” and they’re right, of course.

But the expectation that mass entertainment should include the pleasure of witnessing expressive physical movement was more often satisfied with much simpler (though remarkably subtle) tricks: actors who were allowed to roam around the set, use all the space available to them – from their ankles at the bottom of the frame to the empty 8 inches above their heads at the top – as their field of play, or deliver dialogue while lighting cigarettes or pouring drinks.

That kind of thing wasn’t an imperative, but more of a reflex; so when a swimmer who also (more or less) acts comes along, no one – from Louis B. Mayer all the way down to some auto mechanic in the smoking section of the Orpheum Theatre in Pensacola – bats an eye. Of course people will go to the movies to watch a girl swim. Why wouldn’t they?

Nevertheless, while Esther Williams may be the main event of her vehicles, she isn’t the only one. Most of her scenes on dry land sink like a stone, and the brains behind the camera seem to have recognized that, all things considered, it’s tough to build a whole movie around the backstroke.

Consequently, most of the features included in “TCM Spotlight: Esther Williams – Volume 2” feel more like compilations of short films; just the narrowest of narrative threads connect the various attractions vying for the post-war spectator’s attention.

You get a quick listen at the top of the pops (Tommy Dorsey in Thrill of a Romance, Tony Martin in Easy to Love); plenty of travelogue (excellent color location footage of Mackinac Island (This Time for Keeps), Mexico (Fiesta), Cypress Gardens (Easy to Love again); and even a bit of kulcha (Lauritz Melchior, credited as “the Metropolitan Opera Star,” plagues both Thrill of a Romance and This Time for Keeps with overlong and overfrequent opera numbers; meanwhile, a new Aaron Copland piece is premiered in Fiesta). 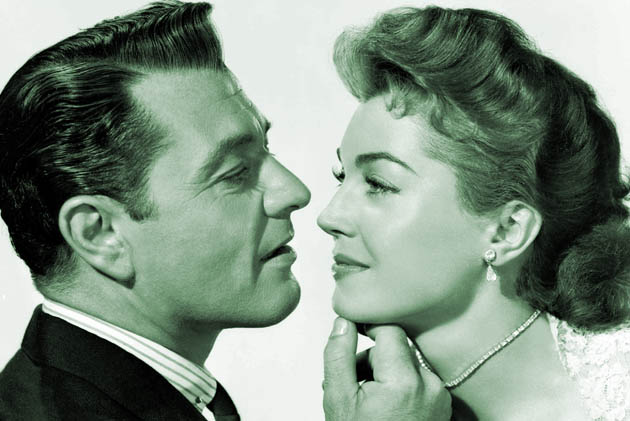 Easy to Love with Esther Williams and Tony Martin. Directed by the now largely forgotten Edward Buzzell, MGM’s 1946 musical Easy to Wed was a major hit for both Van Johnson and Esther Williams. Fast forward to 1953 and Easy to Love – not a sequel or prequel or remake – which, though bringing back Johnson and Williams, and directed by the better-regarded Charles Walters, failed to reach the box office heights of the earlier film. Easy to Wed profits: $1.77 million. Easy to Love profits: $385,000. As for Tony Martin, by then in movies for nearly two decades (Ali Baba Goes to Town, Ziegfeld Girl), he is featured as Easy to Love‘s third wheel.

What you get in these movies, in other words, is a parade of the cultural aspirations, hopes, ambitions, and desires of the new upwardly mobile mass audience.

A lot of it is pretty goofy, but I resisted (for the most part) the urge to have a cheap laugh at the expense of the past – the people who bought tickets for these films had just emerged from nearly two decades of economic and political upheaval the likes of which few reading this review could imagine.

Had I been around in, say, 1948, I probably would have found these movies’ willingness to blatantly pander to the audience’s consumerist fantasies both insulting and irritating. Now, it’s almost touching to see the timid hopes people had for their lives in the aftermath of economic depression and world war, and with the brand new threat of nuclear annihilation to accommodate themselves to.

The films in this box set span the layover between World War II and rock and roll; a five-day vacation in Cypress Gardens was as close to demanding the impossible as anyone was willing to dare.

Esther Williams in the 21st century: Historical & sociological importance – but little else

If you find yourself unmoved by what you’ve read so far, then I suggest you skip this Esther Williams set altogether as, historical and sociological dimensions aside, these films are pretty dreadful. The visual style, for instance, usually hovers around the level of “faceless competence.” (Curiously enough, the dullest-looking of the bunch, This Time for Keeps, was shot by Fritz Lang’s brilliant Metropolis cameraman Karl Freund.)

But those of you who are fans of mid-century set design and color values will at least have that to pay attention to. Better to scrutinize the periphery of the shots than to waste too much attention on supporting casts featuring the likes of Jimmy Durante, the aforementioned Mr. Melchior and, worst of all, Van Johnson (inflicted on us in both Easy to Love and Thrill of a Romance).

Esther Williams herself isn’t much better. She wasn’t blessed with a surplus of screen presence, and her directors seem to have realized this, giving her fewer close-ups than was typical for the era and even sometimes minimizing her in compositions. Nobody could quite figure out what to do with her, and these limp, directionless movies are the result. 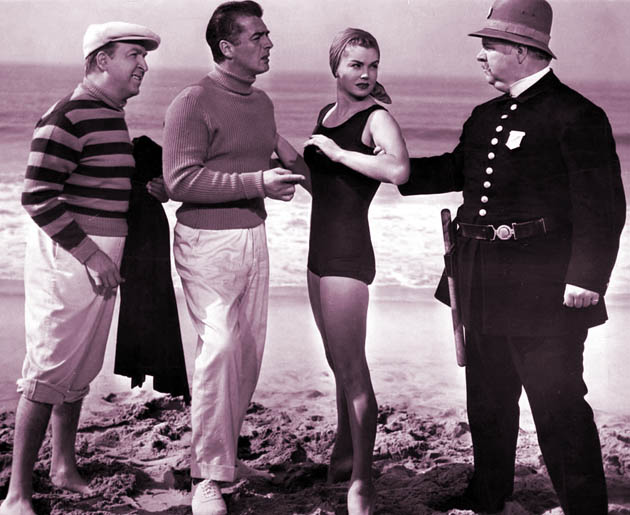 Esther Williams in Million Dollar Mermaid, with Victor Mature, Jesse White, and Charles Watts. In the early 1950s, Esther Williams’ films weren’t bringing in as much cash as they had in the 1940s. With veteran Mervyn LeRoy at the helm, co-stars Victor Mature and Walter Pidgeon, choreography by the kaleidoscopic Busby Berkeley, and a screenplay (by Everett Freeman) featuring an actual plot – swimmer-turned-actress Annette Kellerman and her obscene one-piece bathing suit – Million Dollar Mermaid was MGM’s attempt to reverse Williams’ box office slide. Unfortunately for both studio and star, the popular but costly film resulted in relatively modest profits. Following the 1955 flop musical Jupiter’s Darling, Williams would be featured in only three more Hollywood movies and the little-seen, Spanish-made The Magic Fountain.

If you feel like you must watch one of the films on this set, I nominate Million Dollar Mermaid (1952). Mervyn LeRoy directs, and while he’s not the world’s most exciting filmmaker, he learned his craft at Warners in the 1930s and thankfully never grew out of that no-nonsense, efficient style.

Esther Williams has improved as an actress by this point, at times even convincingly impersonating an adult woman of average IQ; in this case, that’s real-life Australian actress-swimmer Annette Kellerman. Male lead Victor Mature isn’t exactly, say, Robert Mitchum, but – and this isn’t so much setting the bar low as tossing the bar into the Marianas Trench – he’s at least more exciting than Van Johnson.

Most significantly, Million Dollar Mermaid benefits from the hand of Busby Berkeley, brought in to direct Williams’ swimming scenes, which here achieve a kind of breathless, rapturous grandeur. Berkeley’s sequences in Million Dollar Mermaid are the best of the whole set, using shot scale, camera movement, and color in ways that foreshadow the advances of the 1950s and 1960s more than they look back to his career-making Depression-era films.

No wonder this one is reputedly Williams’s favorite of her filmography; it’s the only one that does justice to her athleticism.

The bells and whistles of this set are up to the usual fine standard of previous Turner Classic Movies boxes. Each film is accompanied by a trailer and vintage MGM short, and the packaging is very attractive.

The only failing here, oddly and atypically for TCM, is the video quality, which is shockingly inconsistent across the six movies. Thrill of a Romance, in particular, snaps back and forth between a lovely, sharp, vibrant image and something that seems to have come from a VHS dub.

Esther Williams fans must be out there

Despite this, and despite Esther Williams’ shortcomings as a star, I’m glad that Turner went to the trouble of preserving these goofy films. I don’t quite understand who the audience for this set is supposed to be, but the fact that there is a second set leads me to believe that they’re out there.

I hope they have a good time with these discs. I wouldn’t recommend this to anyone else, other than students of classical Hollywood’s decline, or perhaps Van Johnson enthusiasts.

Below is director and cast info of the six movies found in the “TCM Spotlight: Esther Williams – Volume 2 box set.”

It is nice to watch classical movies at times, I will have to watch this Million Dollar Mermaid and scrutinize the film myself. Thank you for sharing such an interesting and informative article. - Manila :)