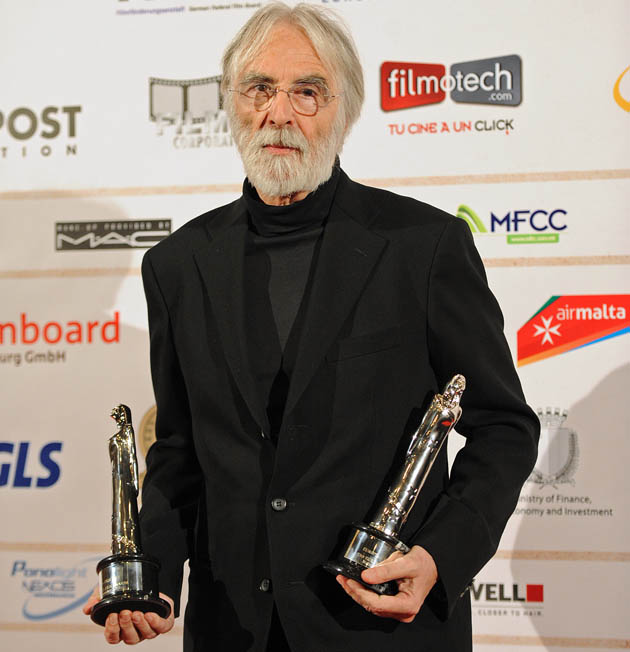 Michael Haneke’s Amour, a French-Austrian-German co-production about an elderly married couple coping with illness and encroaching death, was the top winner at the 2012 European Film Awards ceremony held on Dec. 1 at the Mediterranean Conference Centre in Valletta, Malta.

Trintignant sent in a video message thanking the European Film Academy, his wife, and those involved in the making of Amour. Riva, for her part, sent in an acceptance speech thanking Haneke for writing a strong role for an older actress, adding, “I am so proud to have done it right.”

Michael Haneke, for his part, was present to pick up his third Best Director European Film Award from the hands of Spanish filmmaker Carlos Saura and French actress Amira Casar, in addition to his first trophy as a producer of the Best European Film.

The 70-year-old Haneke had previously won Best Director honors for the Paris-set psychological/political thriller Hidden / Caché (2005) and for The White Ribbon (2009), a stark, black-and-white drama set in pre-World War I Germany. Hidden was also 2005’s Best European Film, but that award went to producer Veit Heiduschka (who also co-produced Amour).

While accepting his Best Director award, Haneke declared he “would like to speak in my own language to maintain my own identity.” He then thanked his wife, Trintignant and Riva, and the others in the Amour crew. Yet, according to Screen Daily, when Haneke went back up on stage to accept the Best European Film Award, he said thank you in German, French, Spanish, and Italian.

As reported in The Guardian, Haneke – this year’s Palme d’Or winner and next year’s potential Oscar contender – later “dismissed interest in awards buzz and was courteously curt about the importance of any formal accolade. ‘It’s very pleasant. The respect of any viewer is important to me.’ ” Haneke also opted not to discuss upcoming movie projects, for “you don’t talk about eggs that have not yet fallen from the chicken.”

And referring to global audiences’ eagerness for glitzy but shallow fare – a Hollywood specialty – the German-born, Austrian-raised Haneke lamented, “If you serve someone mashed potatoes, it’s possible he won’t much like spinach.”

Even though it topped the 2012 European Film Awards, Amour‘s victory wasn’t a clean sweep. Haneke’s drama had also been in contention for Best European Cinematographer (Darius Khondji) and Best European Screenwriter (Haneke).

The winners in these categories were, respectively, Sean Bobbitt for Shame, starring Michael Fassbender as a troubled man with a high sex drive, and Tobias Lindholm and Thomas Vinterberg for The Hunt, in which Mads Mikkelsen is a kindergarten teacher wrongly accused of being a child molester.

Helen Mirren at the 2012 European Film Awards. The 2007 European Film Awards’ Best Actress for her portrayal of the U.K.’s Queen Elizabeth II in The Queen, Helen Mirren was this year’s recipient of the non-competitive Outstanding European Achievement in World Cinema Award. Initially handed out to specific achievements in a particular year (e.g., Milos Forman for The People vs. Larry Flynt, Roman Polanski for The Ninth Gate), this honorary award has evolved into a “body of work” tribute – a sort of Lifetime Achievement Award for, more often than not, younger (or less elderly), still-active talent (e.g., Isabelle Huppert, Mads Mikkelsen).

The 2012 Lifetime Achievement Award was given to The Conformist, Last Tango in Paris, and The Last Emperor filmmaker Bernardo Bertolucci.

For the record, in 2012 Helen Mirren was seen in Sacha Gervasi’s Hitchcock (as Alfred Hitchcock’s wife, Alma Reville) and István Szabo’s The Door.

This year’s European Film Awards competition seems to have been particularly prestigious. For instance, Jean-Louis Trintignant’s Best Actor competitors were:

The Intouchables, The Hunt, and Shame were also shortlisted in the Best European Film category. Besides Amour, the other two titles were Paolo and Vittorio Taviani’s Berlin Film Festival Golden Bear winner Caesar Must Die, and Barbara, directed by Best Director Silver Bear winner Christian Petzold.

See below the full list of 2012 European Film Award winners and nominations. 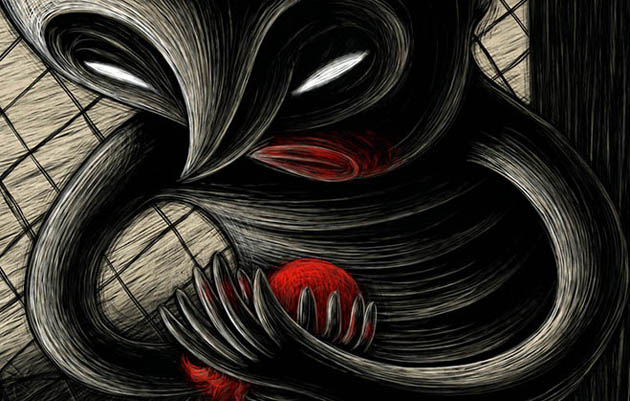 Kali the Little Vampire: Regina Pessoa’s Annie Award-nominated, Christopher Plummer-narrated National Film Board of Canada short. Surprisingly, a trio of domestic blockbusters have been left out of the running in the 2013 Annie Awards’ eight-strong Best Animated Feature category: Dr. Seuss’ The Lorax, Ice Age: Continental Drift, and Madagascar 3: Europe’s Most Wanted. At the other end of the commercial spectrum, two animated shorts from the legendary National Film Board of Canada have been shortlisted: Patrick Bouchard’s Bydlo and Regina Pessoa’s Kali the Little Vampire.

Annie Awards: Every animated feature shortlisted – except for a trio of major blockbusters

The DreamWorks box office bomb Rise of the Guardians, the Walt Disney Studios’ box office bomb Frankenweenie, the Sony Pictures hit Hotel Transylvania, the British-made The Pirates! Band of Misfits, the French-made The Rabbi’s Cat, Focus Features’ ParaNorman, and the Disney releases Brave (via Pixar) and Wreck-It Ralph – in other words, just about every animated feature released in the United States in 2012 – received Annie Award nominations for Best Animated Feature of the year.

Curiously, the low-budget, Franco-Belgian Zarafa failed to be included among the Annie Awards’ eight Best Animated Feature contenders, but directors Rémi Bezançon and Jean-Christophe Lie found their way into the five-strong Directing in an Animated Feature Production shortlist. Go figure.

Bezançon and Lie’s competitors are Genndy Tartakovsky for Hotel Transylvania; Johan Sfar and Antoine Delesvaux for The Rabbi’s Cat; Rick Moore for Wreck-It Ralph; and Sam Fell and Chris Butler for ParaNorman.

Among the notable names shortlisted in the Annie Awards’ countless other categories are:

And in the Voice Acting in an Animated Feature Production category:

Now, in all fairness, not every animated feature released in the U.S. in 2012 is up for a Best Animated Feature Annie Award. Somewhat surprisingly, these three blockbusters have been bypassed:

Well, that’s a question for Nietzsche, or perhaps Nostradamus. But what we can tell you right here, right now, is that the venerated National Film Board of Canada nabbed two nominations in the Best Animated Short Subject category.

The two National Film Board of Canada Annie Award nominees are Bydlo and Kali the Little Vampire.

Described as “an allegory of mankind heading for disaster,” whose “ tragic vision” was inspired by the fourth movement of 19th-century Russian composer Modest Mussorgsky’s “Pictures at an Exhibition,” Patrick Bouchard’s Bydlo is a “stop-motion rendering of the cycles of life, the power of man and beast, and the beauty and horror of labour.” Cynthia Tremblay penned the screenplay.

Directed by Regina Pessoa and narrated by Canadian-born Best Supporting Actor Academy Award winner and The Sound of Music co-star Christopher Plummer (Beginners, 2011), Kali the Little Vampire chronicles the emotional awakening of Kali, a little vampire who “lives in the shadows and envies the other children’s life in the sun.” Until one day he finds out he can make a difference in the lives of other (non-blood-sucking) people.

The 2012/2013 Annie Award winners will be announced on Saturday, Feb. 2, at the UCLA Royce Hall in Los Angeles.

The Walt Disney Studios and the Annie Awards’ International Animated Film Society may have been at odds with one another in the past, but guess which studio is a “Platinum Sponsor” of the 40th Annie Awards?

Kali the Little Vampire image: National Film Board of Canada.