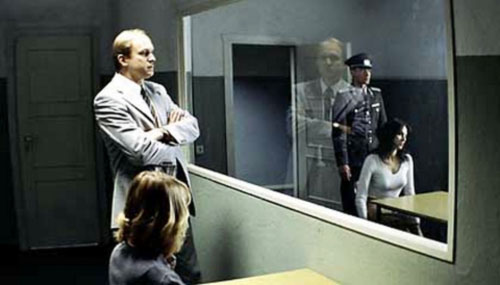 Pedro Almodóvar’s Volver, about the relationship between two young women and the ghost of their dead mother, and Florian Henckel von Donnersmarck’s Das Leben der Anderen / The Lives of Others, which follows a Stasi spy who begins to question his loyalty to the Communist party, are the two top contenders for this year’s European Film Awards.

Other top contenders include Ken Loach’s 2006 Cannes Film Festival winner The Wind That Shakes the Barley, a war drama starring Best Actor nominee Cillian Murphy (also nominated for Neil Jordan’s injustice tale Breakfast on Pluto, which is also in the running for a Best Film award) and Michael Winterbottom and Mat Whitecross’ docudrama The Road to Guantanamo, about three young Englishmen of Pakistani descent who are incarcerated and tortured at the “American Gulag.”

And finally, Jasmila Zbanic’s family drama Grbavica, which depicts the lingering effects of the Bosnian War in the lives of a young woman and her mother when both face the truth about the identity of the girl’s father. The film won the Golden Bear at this year’s Berlin Film Festival.

With the exception of Volver – the likely winner in the Best Film, Best Director, Best Screenplay, Best Cinematography (José Luis Alcaine) and Best Composer (Alberto Iglesias) categories – all other Best Film nominees are dramas with a large dose of political commentary.

The large majority of the nominees are Western European productions or co-productions, mainly from the United Kingdom, Ireland, Germany, and Denmark. In fact, films mostly spoken in English (including the Spanish-made La Vida secreta de las palabras), German, and Danish account for 21 of the 36 nominations in the 7 core categories.

Cruz is the odds-on favorite for the Best European Actress award, though she has strong competition from the French Academy’s César winner Nathalie Baye, as a recovering alcoholic police officer in Le Petit Lieutenant, and Berlin winner Sandra Hüller, as a woman who is presumably possessed by the devil in Requiem. (One surprise European Actress nominee was Toronto-born Sarah Polley, for La Vida secreta de las palabras / The Secret Life of Words.)

The Best Actor trophy will probably go to either Cillian Murphy chameleon-like abilities – a dreamy transvestite cabaret singer in Breakfast on Pluto; a fighting Irish rebel in The Wind That Shakes the Barley – or Ulrich Mühe, for his conflicted spy in Das Leben der Anderen. Mühe may have an edge for being older, on top of the fact that, as a renowned East German stage star, he himself was a victim of the Stasi spying apparatus.

(Strangely, the European Awards have no “supporting actor/actress” category.)

French-born, Polish-raised producer-director-writer Roman Polanski will receive the Lifetime Achievement Award and British producer Jeremy Thomas will be honored with the Prix Screen International for “European Achievement in World Cinema.”

Several other ancillary categories, including Best Non-European Film and the People’s Choice Awards will be announced in the coming weeks.

And in case you were wondering: Neither The Queen nor The Last King of Scotland were eligible for this year’s European Film Awards, for they opened in the fall. See below a couple of the European Film Academy’s film eligibility rules:

“In the 20 (twenty) European countries with the highest number of EFA members (as of 15th March 2006), these members vote directly for one film from among the national feature films released in their country between July 2005 and April/May 2006. The film having received the highest number of votes in each of these countries will automatically be included in the selection of films, provided it corresponds to the regulations of the European Film Awards”

(Here’s wondering if movies that open in June fall into some sort of European Film Academy black hole, thus becoming ineligible for the awards.)

In any case, Helen Mirren, Forest Whitaker, et al. will have to wait until 2007.

The nominations were announced at the Seville Film Festival on Nov. 4.

The AFI FEST 2006 jury prize for Best Film was given to Jasmila Zbanic’s Grbavica (Austria / Bosnia and Herzegovina / Croatia / Germany), the story of a Bosnian mother (an outstanding Mirjana Karanovic) who must confront her nightmarish past after her pre-teen daughter starts demanding answers about her dead war-hero father.

Grbavica, Bosnia and Herzegovina’s submission for the upcoming Best Foreign Language Film Academy Award, will be released in the United States in mid-February, probably to garner some Oscar publicity. Indeed, Zbanic’s film will in all likelihood get an Oscar nod. It has already won a Golden Bear at this year’s Berlin Film Festival, and it is a story of undying mother love – exactly the sort of human drama that Academy voters appreciate.

Incidentally, Grbavica also happens to be a sober, touching, carefully directed, and superbly acted motion picture. It is so effective, in fact, that it has been banned in Republika Srpska, where Bosnian Serb leaders insist – despite all evidence to the contrary – that no crimes against humanity were committed during Bosnia’s civil war.

The festival’s Audience Award for Best Film went to Fredi M. Murer’s Vitus (Switzerland), about a young piano prodigy who, abetted by his grandfather (Bruno Ganz), does his best to break the ties that bind him to the music world.

Unfortunately, I missed Vitus, but as Switzerland’s entry for the Oscars, Vitus is another film with the requisite plot points that make Academy members’ hearts flutter. (Foreign-Language Film Academy voters have a perverse bias for films about suffering little boys.)

Mark Verkerk’s Buddha’s Lost Children was the jury’s choice for Best Documentary. Verkerk’s film follows a Buddhist monk as he takes to his monastery destitute children from Thailand’s Golden Triangle region. Once there, the children leave their past behind as they are indoctrinated with Buddhist philosophy.

Screamers follows the rock band System of a Down as they try to make the world – Turkey, in particular – acknowledge the 1915 Armenian genocide, the first of a series of mass murders that took place in the 20th century. Blindsight shows how Erik Weihenmayer, the first blind person to climb Mt. Everest, leads six blind Tibetan teenagers up the tallest mountain on Earth.

Stefanie Berk’s Disappearing (U.S.) won the jury prize for Best Short, while Michael Dreher’s Fair Trade (Germany / Morocco) took the Audience Award in that category. As per the AFI synopsis, Disappearing “depicts one woman’s transformation that begins simply by learning to swim.” Fair Trade uses the Strait of Gibraltar, which separates Europe from Africa, as a symbol of the rich vs. poor gap.

Press Release: Beverly Hills, CA – With 16 animated features submitted for consideration in 2006, the Academy of Motion Picture Arts and Sciences anticipates that its Animated Feature Film category, for the first time since 2002, may include a full slate of five nominees.

The 16 features expected to compete for 79th Academy Awards nominations are:

Arthur and the Invisibles, Happy Feet and Paprika have not yet had their required Los Angeles releases. If any one of the group were not to meet that requirement, the field in the category would fall below 16, the number required to trigger the five-nominee slate. With 15 or fewer contenders, Academy rules allow a maximum of three nominated features.

Films submitted in the Animated Feature category also may qualify for Academy Awards in other categories, including Best Picture, provided they meet the requirements for those categories.

Nominations for the 79th Academy Awards will be announced on Tuesday, January 23, 2007, at 5:30 a.m. PST in the Academy’s Samuel Goldwyn Theater.

Academy Awards for outstanding film achievements of 2006 will be presented on Sunday, February 25, 2007, at the Kodak Theatre at Hollywood & Highland Center, and televised live by the ABC Television Network at 5 p.m. PST, beginning with a half-hour arrival segment.

The 20th Leeds International Film Festival was held between Nov. 2–12.

Special mention was given to Mohamed Al Daradji’s British-Dutch-Iraqi co-production Ahlaam / The Dreams. Reportedly based on true events, Ahlaam portrays the events leading up to, and the aftermath of, the 2003 invasion of Iraq as seen through the eyes of the occupants of a mental hospital in Baghdad.

Special Mention: Eût-elle été criminelle… / Even If She Had Been a Criminal (Dir. Jean-Gabriel Périot, France)

The Best Film Award went to a Brazilian production, O Cheiro do Ralo / Drained, which will be screened at the 2007 Sundance Film Festival.

The 2006 BAFTA Scotland (or Scottish Bafta) award winners were announced in Glasgow on November 12, 2006.