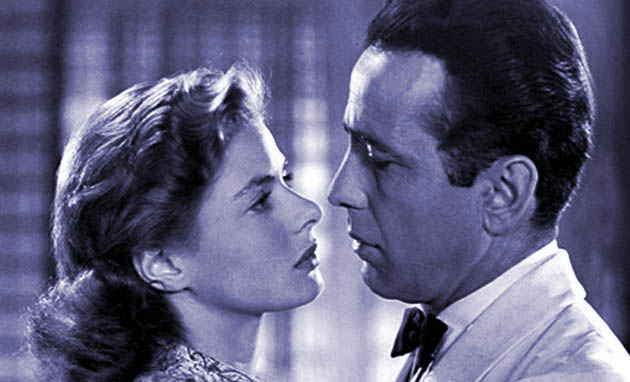 ‘Everybody Comes to Rick’s’ vs. ‘Casablanca’

One of the major Hollywood classics of the studio era, Casablanca, Warner Bros.’ mix of international politics and romance, was not an original story. Instead, the Michael Curtiz-directed 1943 Best Picture Oscar winner starring Humphrey Bogart, Ingrid Bergman, and Paul Henreid, was based on an unproduced play written by Murray Burnett and Joan Alison: “Everybody Comes to Rick’s.”

Those interested in the film and its history might want to check out Martin N. Kriegl’s brief 2004 essay “Casablanca: A Comparison between the Classic Motion Picture and Its Stage Play Source,” in which the author discusses the differences between the Burnett-Alison play and Philip G. Epstein, Julius J. Epstein, and Howard Koch’s screenplay adaptation.

From ‘mediocre’ source material to cinematic ‘gem of rare beauty’

Here are a couple of snippets from Kriegl’s Casablanca vs. “Everybody Comes to Rick’s” essay:

“Upon first reading both stage play and screenplay, one is tempted to jump to the conclusion that Casablanca is one of the rare occasions where a story, through adaptation from one medium to another, is elevated from a mediocre (if promising) source material to a gem of rare beauty. …

“The character Rick, a former rebel with apparently inviolable values and principles, who has lost faith in the world and humanity, but is reborn through a past that catches up with him and forces him to rediscover the hibernating fighter within himself, feels much truer and embedded with a much profounder message in the screenplay. Whereas in the stage play he seems, up to the third act, whiny and weak, always complaining how ‘burnt out’ he is, that he has ‘no cause to believe in’ and ‘nothing to fight for,’ the screenplay conveys a man that, even though his principles seem to have been reduced to sticking out his neck for nobody, has a strong and powerful heart pounding in his chest. Moreover, his vernacular in the play places him on a lower social scale than his speech in Casablanca does, as he often casts direct insults at both Ilsa and Laszlo, literally calling them ‘bitch’ and ‘high class pimp’ respectively.”

Bear in mind that the Production Code would never have allowed Humphrey Bogart’s Rick to call Ingrid Bergman’s Ilsa a “bitch” or Paul Henreid’s Laszlo a “high-class pimp.”

And check out the comments section further below for more info about “Everybody Comes to Rick’s.”

In addition to winning the 1943 Best Picture Oscar, Casablanca – which actually opened in New York City the previous year – also brought Oscar statuettes to director Curtiz and its trio of screenwriters.

Humphrey Bogart was nominated for Best Actor, but lost to Paul Lukas for another Warners release, Herman Shumlin’s Watch on the Rhine. Best Supporting Actor nominee Claude Rains lost to Charles Coburn for George Stevens’ comedy The More the Merrier.

Ingrid Bergman was also shortlisted that year, but for Sam Wood’s Spanish Civil War drama For Whom the Bell Tolls. She lost the Best Actress Oscar to fellow David O. Selznick contract star Jennifer Jones for The Song of Bernadette.

Also in the Casablanca cast:

Alan Ladd and Veronica Lake in The Blue Dahlia. One of the many Hollywood duos featured in Leading Couples: The Most Unforgettable Screen Romances of the Studio Era, Paramount’s Alan Ladd and Veronica Lake have been unfairly neglected by film historians, whose focus has invariably been on the better-remembered Humphrey Bogart and Lauren Bacall.[1]

With text by Frank Miller, whose previous books include Leading Ladies and Leading Men, introduction by Turner Classic Movies host Robert Osborne, and loads of photographs covering about half a century of Hollywood history, Leading Couples: The Most Unforgettable Screen Romances of the Studio Era (Chronicle Books, 2008) offers a glimpse into nearly 40 movie pairings from the so-called Golden Era (and a little later).

Perhaps with the exception of Fay Wray and King Kong, my favorite film couple among those featured in the book are Alan Ladd and Veronica Lake, who were ideally cast in their four pairings in the 1940s.

Ladd got his big break opposite the recently established Lake in Frank Tuttle’s 1942 noir thriller This Gun for Hire, nominally starring Robert Preston. There would be three other costarring gigs for the Ladd & Lake duo: The Glass Key (1942), The Blue Dahlia (1946), and Saigon (1947).

When not working with Veronica Lake, Alan Ladd was kept busy as one of Hollywood’s top male stars of the 1940s, in dramas and thrillers such as And Now Tomorrow, Salty O’Rourke, Two Years Before the Mast, and O.S.S. His career peak, however, came out in 1953: as the title character in George Stevens’ Western Shane, playing opposite Jean Arthur, Van Heflin, Brandon De Wilde, and Jack Palance.

Veronica Lake’s stardom all but ended along with the 1940s. When not smoldering her way into the heart of Alan Ladd’s good-looking thugs, she was possibly at her best as a World War II nurse who uses her bosom – no kidding – to wipe out the evil Japanese in Mark Sandrich’s So Proudly We Hail, costarring fellow Women at War Claudette Colbert and Paulette Goddard.

[1] Admittedly, Humphrey Bogart & Lauren Bacall had the advantage of being directed by higher-end filmmakers at Warner Bros.: Henry Hathaway (To Have and Have Not), Howard Hawks (The Big Sleep), Delmer Daves (Dark Passage), John Huston (Key Largo).

Alan Ladd & Veronica Lake had to make do with Frank Tuttle (This Gun for Hire), Stuart Heisler (The Glass Key), George Marshall (The Blue Dahlia), and Leslie Fenton (Saigon).

Yet, as evidence of their combined talents, the smoldering chemistry between the two good-looking blonds – and their (however underrated) performances – unfailingly manage to enhance less-than-gripping screenplays and less-than-expert directorial hands.

“’Everybody Comes to Rick’s’ vs. Casablanca + Hollywood Leading Couples” last updated in December 2018.

To marilyn. A copy of the play on which the movie Casablanca is derived can be found here. I wens also through it, and the differences, some of them forced by the moral code at Hollywood are quite interesting. Many dialogues were kep identical. Rgds

I see a picture of Errol Flynn and Olivia De Havilland on the cover but are they mentionned in the book? They were fantastic together. Another missing one is my all time favorite: Greta Garbo and John Gilbert. They steamed on film and were very good actors. I make part of the bunch who don’t get Ladd and Lake either…They were really good looking but I don’t see any chemistry betweend them…Well I haven’t seen much about them and feel uncomfortabme criticizing,. Will check them out and then let’s see…

To Hal,
I’m teaching a program about adaptations next fall/winter. I’d love to include Everybody Comes to Rick’s / Casablanca if I manage to get a copy of the play. Any chance of acquiring a copy of the play from you?

you say you have a copy of the script for Everybody Comes To Rick’s? Any chance a copy could be bought? I’d love to get a look. Been looking for a copy off and on for years.

Would love to discuss this with you.

Oh, and this comment you quote of Kriegl’s is hilarious:

“Moreover, his vernacular in the play places him on a lower social scale than his speech in Casablanca does…”

Ummm… No. In the US, it’s both the upper and prole classes that swear. It’s only the middles who insist on euphemisms. This highlights Kriegl’s origins as a German, and not an American. For a better grasp of this sort of thing, read Paul Fussell’s “Class,” Lewis Lapham’s “Money and Class In America,” and Nelson Aldrich’s “Old Money.”

I’m probably one of the few people on the planet who can critique Kriegl’s job on this — because I have my own copy of the play. (In the mid-1980s I xeroxed the whole thing intact from a bound copy then in the UCLA Theater Arts library.)

His citations in the .PDF appear to be accurate in that they match to the pages in the script. However in this reader’s opinion, they appear cherry-picked to prove a particular point — that the play is weak, and the movie is great. That’s the official Warner Brothers’ line, and one can hardly blame them for it, but… It seems cheap, somehow.

Kriegl makes no mention that Ilsa is “Lois Meredith” and like Rick an American in the play. Far spunkier, and a much snappier character. (Presumably this was changed when Bergman became attached.) For example, if you remember the big deal about how Rick never drinks with the customers, but he breaks this rule for Lois and Victor, Rinaldo tells her, “Madame, you have just made history.” Her reply: “It isn’t the first time. You must read my memoirs.” (pg 1-33)

This raises another point, perhaps minor — it’s Rinaldo, not Renault, in the play. It’s Luis, not Louis. There are other character name changes, as well.

But the core of the story is much the same as the screenplay. Los Bros Epstein and Koch did far more of a light adaptation than a wholesale rewrite of Burnett and Alison, at least to this reader.

Are you kidding me, the “couples”/ “actors” can’t compare to the couples of yesteryear!