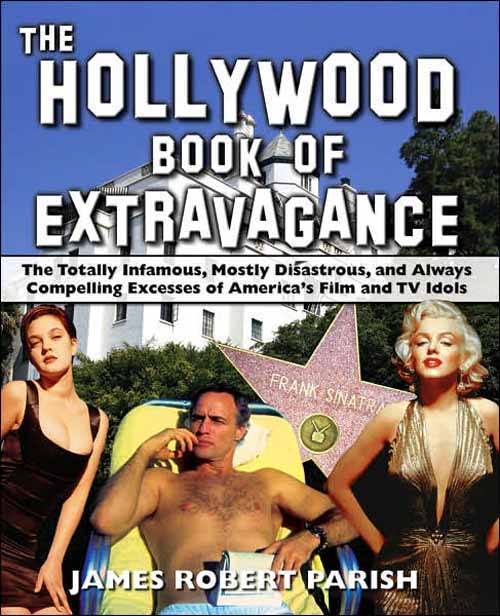 Examples of extravagance in the world’s film capital: The Hollywood Book of Extravagance.

The Hollywood Book of Extravagance. How do you write something with that sort of title without falling into the trap of sensationalism or cheap journalism? And could you say something about the formatting of your text – the mini-bios divided into specific chapters – and what you wanted to accomplish with it?

To my mind sensationalism is presenting a story/narrative/whatever without backing up the presentation with both solid facts and the author’s stated interpretation of the given facts. Hopefully, in The Hollywood Book of Extravagance, I have avoided tabloid journalism by providing compact but in-depth studies of each individual documented within the volume.

I used the category approach (e.g., “So Much Partying,” “So Much Neurosis”) for structuring this new book so that readers could examine the life and times of a wide range of individuals (who held sway in various decades) who were subject to the same type of excess. My plan was that this would provide an additional means for readers to easily compare the effects of “too much this” or “too much that” in an assortment of notables’ lives over the years.

In a way, the “Extravagance” in the title is a misnomer, no? Your book includes many personalities – Jean Arthur, Woody Allen, Marlon Brando, Jennifer Jones – who are known not for their excesses but for their eccentricities or quirkiness. Others such as Louis B. Mayer, Mary Pickford, Michael Eisner, and Louella Parsons are known for their inordinate power.

The word “extravagance” is used in the book’s title in the sense of excessive, with personalities such as Jean Arthur, Jennifer Jones, and Marlon Brando being extremely quirky and/or eccentric. Such traits are “just” other examples of show business celebrities being allowed to be – even applauded by the public for being – extremely self-indulgent and hedonistic.

Such indulgence – for better or worse – sets these notables apart from ordinary folks and are another illustration of Hollywood celebrities being bigger-than-life individuals. This over-the-top extravagance is reflected in other Tinseltown personalities covered in this book (such as Louis B. Mayer and Michael Eisner) who had an excessive amount of power which they used/abused at will, and which the Hollywood community (at least for a significant time) permitted them to do so.

Did you pick your subjects or were there any the publisher imposed on you? In fact, your book offers lots of stories about old-timers like the aforementioned Mary Pickford (right), Gloria Swanson, Buster Keaton, and Clara Bow, in addition to a number of more “recent” old-timers like Marlon Brando, Jayne Mansfield, Peter Sellers, and Rex Harrison. Were you free to choose whoever you wished to include in the book?

The personalities covered in this book were all my choices and I had free reign to pick whomever I felt was illustrative of each “extravagance” in the Hollywood spectrum to detail in this volume. As always, I included a mix of old and new Hollywood individuals which allowed for a contrast in how Tinseltown/the public reacts to celebrities’ excessive behavior – whether in the 1920s or today.

Was there anyone you wanted to include in the book, but was forced to leave out?

In my enthusiasm to present a very wide range of personalities in the book I had prepared several more mini chapters than the book would comfortably hold for its paperback format/length. As such, a few chapters were dropped (e.g. Merv Griffin and Kay Francis) as their chronicles could most easily be deleted without affecting the book’s overall presentation/representation. Hopefully, should I undertake a sequel to this volume, I can utilize these deleted chapters.

Would you say that Hollywood’s “extravagance” is any different today than it was 50 or 80 years ago?

Can one compare the largess of Gloria Swanson’s grandiose living in the 1920s with the pampered lifestyle of today’s Paris Hilton or Britney Spears? Most certainly. In both the 1920s and today, the public is reacting to how these pampered, indulged celebrities act/react in their oversized existences in comparison to the lifestyles and moralities of the average person of the day. Moviegoers have always wanted their favorites to be bigger-than-life both on and off the screen. It is part of the reason that attracts fans to such oversized personalities. That has not changed over the decades.

As with so many areas of life, Tinseltown celebrities have usually been far ahead of the norms of the rest of the U.S. and the world, whether it be in lavish living, promiscuousness in relationships, excessive substance abuse, and this intrigues (or shocks or titillates) the public. As has been true of the entertainment industry – and Hollywood in particular – for many, many decades, the public has been far more fascinated in learning more about the lifestyles of show business notables than information about average people. Just like sports figures, politicians, and royalty, show business stars – with their oversized lives and excessive behavior – enthrall the public.

In particular, show business personalities resonate more with the public than the typical rich person because the public had seen the performers on screen, in countless media interviews, etc., and these cumulative experiences have personalized the ties between the show business celebrity and the onlooker.

Roger Ebert: Film Critic + Beyond the Valley of the Dolls Screenwriter