Andre Soares 12 years ago
1.6k
Guess Who’s Coming to Dinner with Spencer Tracy and Katharine Hepburn. Set in the transitional 1960s, “Fade Out, Fade In” is the next episode of the TCM miniseries Moguls & Movie Stars: A History of Hollywood. Directed by Stanley Kramer, whose career took off in the post-World War II years, Guess Who’s Coming to Dinner is the ideal example of the Old Hollywood/New Hollywood flux during that period, as the film has old-timers – Spencer Tracy, Katharine Hepburn, and Cecil Kellaway had all been around since the 1930s – attempting to cope with late ’60s social issues, cautiously presented within the constraints of studio era filmmaking.
Contents hide
1. ‘Moguls & Movie Stars: Fade Out, Fade In’: Bette Davis & Katharine Hepburn + John Wayne & pro-war propaganda film
1.1. ‘Fade Out’: Flourishing racial tensions & decaying Hollywood mansions
1.2. ‘The Magnificent Seven’ & ‘The Green Berets’
1.3. ‘Fade In’
1.4. Glamour Girl Bette Davis
1.5. ‘Fade Out, Fade In’ on Turner Classic Movies (PT)

“Fade Out, Fade In” is the next chapter in Turner Classic Movies’ December 2010 weekly documentary miniseries, Moguls & Movie Stars: A History of Hollywood, narrated by the still very much active veteran Christopher Plummer (The Sound of Music, The Man Who Would Be King, The Last Station). The presentation will take place on Monday, Dec. 13. (See “Fade Out, Fade In” film schedule further below.)

We’re now in the 1960s, a time of radical change in the American film industry. Most of the old moguls – e.g., Louis B. Mayer, Harry Cohn, Samuel Goldwyn – are now either dead or retired. Agents have gained inordinate power following the demise of the old studio system and its long-term contracts, while youth-oriented films become a Hollywood mainstay.

TCM’s choice of movies to accompany “Fade Out, Fade In” is a little curious.[1]

The inclusion of Stanley Kramer’s Guess Who’s Coming to Dinner is understandable, as the 1967 blockbuster is a mix of Old Hollywood (Katharine Hepburn; Spencer Tracy; Cecil Kellaway; to a lesser extent, Sidney Poitier and Stanley Kramer himself) and New Hollywood (“adult” themes such as interethnic marriage and, one presumes, interethnic sex expounded in a groovy San Francisco setting; old vs. young culture clash; two-time Oscar winner Spencer Tracy exclaiming, “Screw all those [bigoted] people!”).

But what about Robert Aldrich’s 1962 slice of Grand Guignol, What Ever Happened to Baby Jane?

The point must be that by the early 1960s, Hollywood’s glamorous,[2] Oscar-winning old queens – in this case, Bette Davis and Joan Crawford – had been reduced to playing old drag queen versions of themselves. Yet, considering the success of What Ever Happened to Baby Jane at the box office and its multiple Academy Award nominations – including Best Actress for Davis – drag queens weren’t such a bad deal after all.

Anyhow, What Ever Happened to Baby Jane could have ended up as a cheapo “horror” flick, but it’s lifted by Robert Aldrich’s direction and by a trio of superb performances, courtesy of Davis, Crawford, and Best Supporting Actor Oscar nominee Victor Buono. 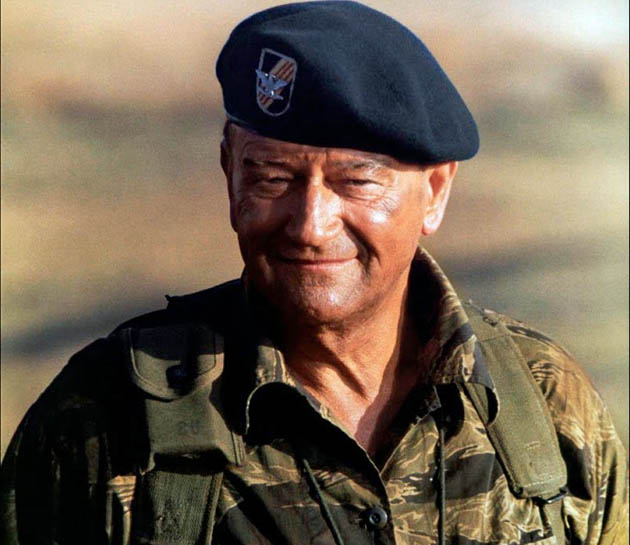 The Green Berets with John Wayne. The iconic all-American movie hero’s 1968 pro-Vietnam War drama, which he directed and starred in, is one of TCM’s “Fade Out” presentations. The Green Berets’ apparent counterpart on “Fade In” day will be George A. Romero’s zombie classic Night of the Living Dead.

‘The Magnificent Seven’ & ‘The Green Berets’

John Sturges’ successful but hardly epoch-making Western The Magnificent Seven (1960) – unlike the conventional but epoch-making The Sound of Music – feels kinda out of place here as well.

A Mexico-set remake of Akira Kurosawa’s much better-regarded 1954 original, Seven Samurai, The Magnificent Seven is chiefly notable for providing an important early role in an A production for superstar-in-the-making Steve McQueen.

Iconic all-American hero John Wayne’s old-fashioned bit of right-wing, pro-war propaganda, The Green Berets (1968), set during the Vietnam War, is the fourth pick to represent movies that were emblematic of the culture clashes of the 1960s in the United States.

[1] Admittedly, this is the “Fade Out” segment. On Wednesday, “Fade In” day, TCM watchers in the U.S. will get:

Sticking to the war theme, The Green Berets should have been followed by something like Denis Sanders’ subversive War Hunt (1962), starring John Saxon and a very young Robert Redford, or Stanley Kubrick’s lucidly demented Dr. Strangelove (1963).

The closest to that is Night of the Living Dead, which is supposed to have been a Vietnam War parable, featuring a deadly army of zombies instead of a deadly zombified army.

A couple of other good possibilities for “Fade In” day would have been Haskell Wexler’s Medium Cool (1969) and John Schlesinger’s Midnight Cowboy (1969). 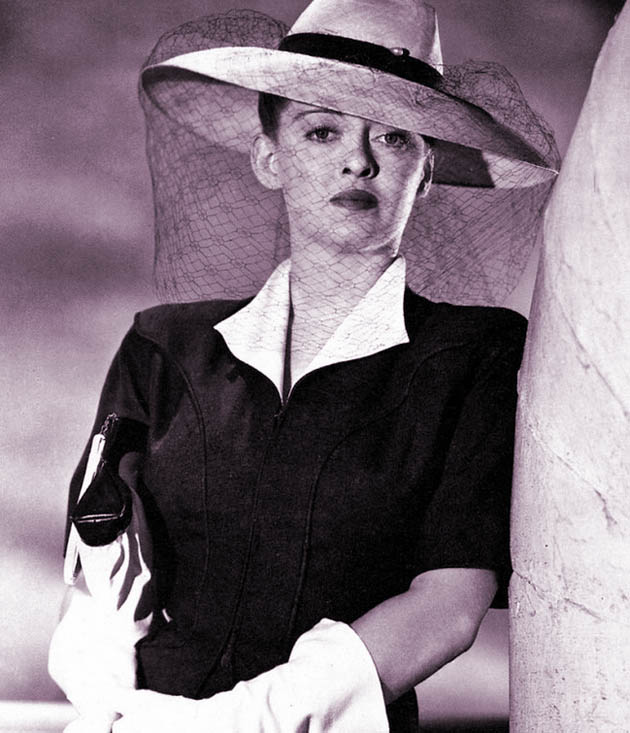 Bette Davis’ glamorous look in Irving Rapper’s 1942 romantic melodrama Now Voyager, one of her biggest hits. Long before her former child star in Robert Aldrich’s What Ever Happened to Baby Jane, Bette Davis toplined numerous movies in which she had to look sophisticated and glamorous. Her decrepit, mouth-wiping Mildred in John Cromwell’s 1934 drama Of Human Bondage was not the rule, but an exception to it.

[2] Despite the myth that she invariably played disheveled, make-up-less hags on screen, Bette Davis did look quite glamorous indeed in many of her films.

Among them were some of her biggest hits of the 1930s and 1940s, e.g., Jezebel, Dark Victory, The Letter, The Great Lie, The Little Foxes, Mr. Skeffington, and a good chunk of Now Voyager.

‘Fade Out, Fade In’ on Turner Classic Movies (PT)

Image of John Wayne in the “Fade Out” presentation The Green Berets: Warner Bros.-Seven Arts.