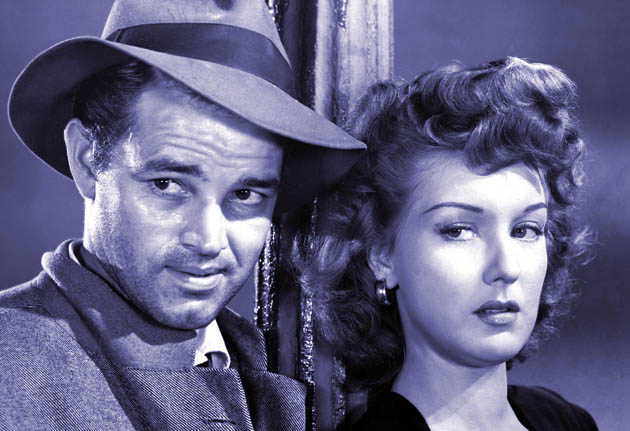 Over the course of the four-week shoot – unusually long for a Producers Releasing Corporation (PRC) production – Savage would be reunited with her former leading man Tom Neal. Their Columbia pairings – however minor, a potential source of publicity for the micro-budget crime drama – had been a key reason producer Leon Fromkess had cast her.

Fate intervenes when a driver (Edmund MacDonald) with whom Al is traveling suddenly dies. A quick and atypical thinker, Al decides to steal both the dead man’s identity and his car. Fate, however, intervenes one more time.

“Man, she looked like she had been thrown off the crummiest freight train in the world!” Al exclaims about halfway into the 68-minute Detour, right after picking up the disheveled hitchhiker Vera (Ann Savage) on a desert road in the American Southwest.

“Yet in spite of that, I got the impression of beauty, not the beauty of a movie actress, mind you, or the beauty you dream about with your wife, but a natural beauty, a beauty that’s almost homely, because it’s so real.”

As it turns out, Vera is not only a “natural beauty,” she’s also a natural psychopath. New identity or no, Al Roberts is doomed. 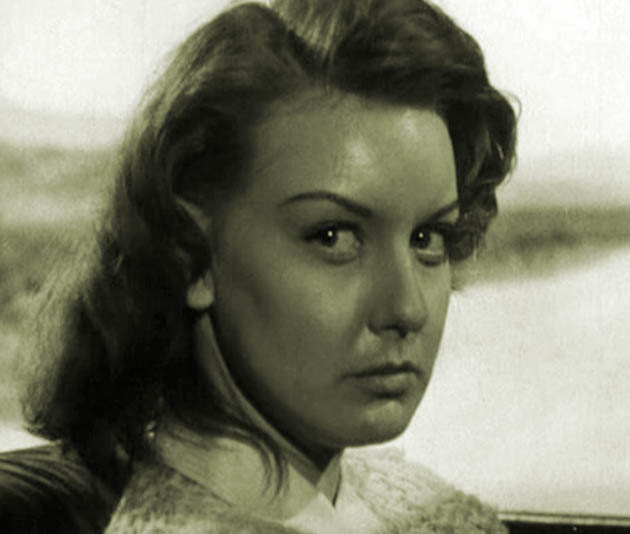 Femme fatale Ann Savage, at age 24, in Detour. Decades after Detour came out, Ann Savage declared her preference for playing “sluts,” as “the good girls were not very meaty” and she “never looked like an ingenue, even when I was.”[2] She also recalled that actresses – e.g., Barbara Stanwyck, Jane Greer, and Claire Trevor – were supposed to look glamorous even when they were playing low-life harpies. At least when first seen, Detour‘s scheming femme fatale, Vera, was an exception to the rule.[3] After a good bath, however, even Vera is transformed into a more conventionally seductive vixen.

‘The Meanest Woman in Film History’

According to Ann Savage herself, Detour‘s femme fatale has been called “The Meanest Woman in Film History.”[2] Considering all that happens after she hitches that desert ride, it’s easy to understand why some would see Vera that way despite fierce competition from the likes of, among others, Bette Davis’ Mildred Rogers in Of Human Bondage, Regina Giddens in The Little Foxes, et al.; Joan Bennett’s Kitty March in Scarlet Street; and Barbara Stanwyck’s Phyllis Dietrichson in Double Indemnity.

Savage, whose superlative work in Detour fully deserves all the latter-day accolades it has received, credited director Edgar G. Ulmer – PRC’s top talent and her own favorite filmmaker – for suggesting the right approach to Vera.[4]

While working on the hitchhiking scene, “I read the lines and Edgar Ulmer corrected the tempo, and that was the last bit of coaching he gave me. He had given me the key, which was the tempo. It was difficult to speak that quickly, but it helped give the character her craziness – it was just right.”

“I am a character actress,” she affirmed to Western Clippings‘ Michael G. Fitzgerald. “I also played the leading lady, but I strived to be different. In B pictures, you really didn’t get a lot to work with, you were just part of the scenery, so I tried to be a real character in each of the films.”

As for her at times troubled professional relationship with Tom Neal, Savage asserted that this time around shooting went smoothly, as Ulmer would not tolerate “any shenanigans” on the set. 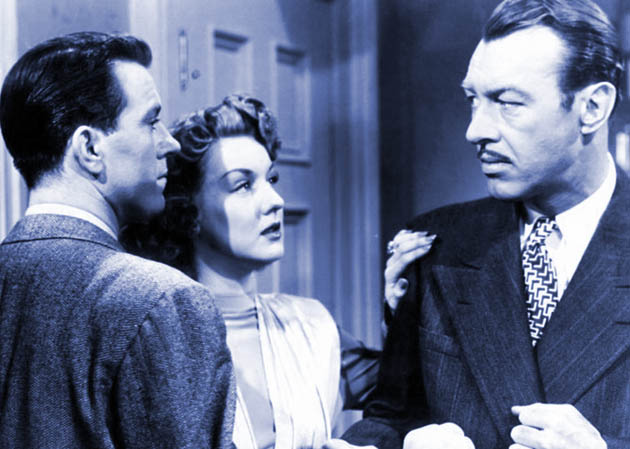 Apology for Murder with Ann Savage, Hugh Beaumont, and Norman Willis. Filmed after but released before Detour, Ann Savage’s other 1945 PRC movie featured her once again as a ruthless femme fatale – one that not only was as glamorous as Joan Bennett, Jane Greer, Veronica Lake, et al., but also much too close for Paramount’s comfort to the ruthless femme fatale played by Barbara Stanwyck in the studio’s Academy Award-nominated 1944 film noir Double Indemnity.

Following Detour, Ann Savage was given the chance to amp up her femme fatale allure in her other PRC effort, Apology for Murder (1945).

With a screenplay credited to Fred Myton (there’s some confusion about whether or not Edgar G. Ulmer, as he claimed, actually wrote or contributed to the script), Apology for Murder has Savage seducing newspaperman Hugh Beaumont (later of Leave It to Beaver fame) into killing her much older husband (Russell Hicks) so she can get her hands on his money. Things go awry when Beaumont’s news editor (Charles D. Brown) begins hounding the young couple.[5]

Despite the eventual title change from Single Indemnity to Apology for Murder, Paramount wasn’t fooled, threatening to sue PRC. According to several modern sources, the film was screened – in September 1945, a couple of months before Detour – for only a few days prior to being pulled in response to the threat.

As expected for a PRC product – even one directed by Edgar G. Ulmer – Detour was tepidly received upon its November 1945 release, failing to reach even the modest heights of Columbia’s Joseph H. Lewis-directed B noir My Name Is Julia Ross, which had come out at about the same time.[6]

“Detour falls short of being a sleeper because of a flat ending and its low-budgeted production mountings,” opined Variety, while adding that “uniformly good performances and some equally good direction and dialog keep the meller moving.” The New York Times ignored it altogether.

Ultimately, no matter how gripping Ann Savage’s unvarnished characterization of a femme fatale, Hollywood stardom – or at the very least critical acclaim and offers for better roles in bigger-budget productions – would prove elusive. 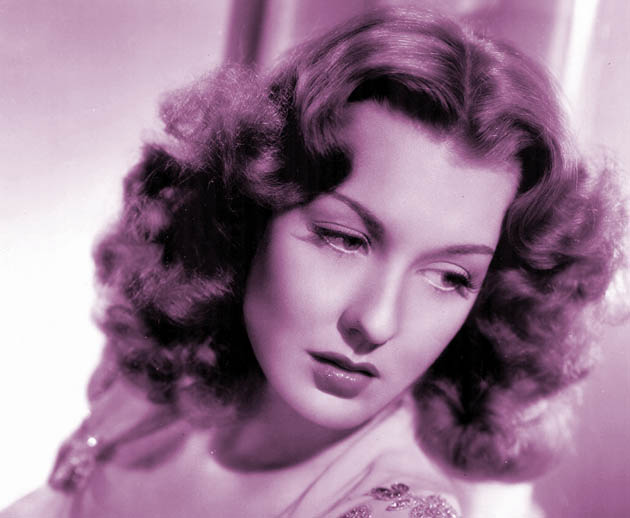 Femme fatale Ann Savage: glamorous publicity shot from the mid-1940s, when, for a couple of years, it looked like she might become a Columbia Pictures leading lady. Instead, Savage ended up at a Paramount B-movie unit and at the minor PRC. Detour or no, her Hollywood career was never to recover. In the ’40s, Columbia was a mid-level studio, with only a trio of top female stars: Jean Arthur, Rita Hayworth, and Rosalind Russell. It didn’t even have that many mid-level leading ladies: Janet Blair and Evelyn Keyes in A and A- productions, Ann Miller in programmers, Nina Foch in B flicks, and Penny Singleton in the Blondie franchise.

[1] With Hollywood behind him, in the early 1960s Tom Neal moved to Palm Springs, in the Southern California desert, where he worked as a gardener. Later on, he started his own landscaping business.

In 1965, his third marriage ended in tragedy. His wife, former Las Vegas receptionist Gail Bennett, was found dead with a bullet in her head. Indicted on a murder charge, Neal would eventually be found guilty of involuntary manslaughter.

After six years behind bars, he was released in December 1971. In August of the following year, he died of heart failure at age 58.

A few years after filmmaker Peter Bogdanovich relinquished his rights to Detour (the novel, apparently, as the film had been in the public domain for quite some time), Tom Neal’s son, billed as Tom Neal Jr., toplined Wade Williams’ little-seen 1992 indie remake.

Also in the cast: newcomer Lea Lavish (in her only film appearance) as the femme fatale and 1940s Universal actress Susanna Foster (Phantom of the Opera, The Climax) taking her final bow in front of the camera.

As an aside, one month after Tom Neal’s death, Detour director Edgar G. Ulmer died at age 68 in Woodland Hills.

Lowe is the one who describes Savage’s femme fatale characters as “sluts.” 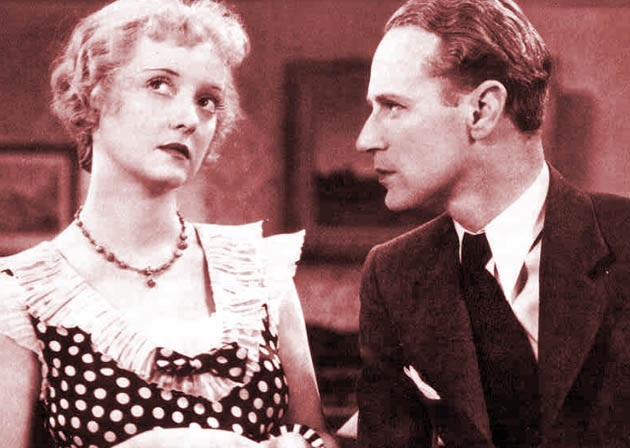 Femme fatale prototype Bette Davis in Of Human Bondage, with Leslie Howard. In John Cromwell’s 1934 film version of W. Somerset Maugham’s 1915 novel Of Human Bondage, Bette Davis comes across as a prototype of the film noir femme fatale: cockney waitress Mildred Rogers is pathologically self-serving, uses her looks to get what she wants, and almost ruins a helpless man under her spell – Leslie Howard’s physically handicapped artist (he has talipes/clubfoot). Curiously, during the peak years of film noir – the 1940s and 1950s – no femme fatale took home an Academy Award. Despite a last-minute change in Academy rules, Davis was also bypassed.

[3] While forgetting Ann Dvorak’s run-down drug addict in Three on a Match (1932) and Bette Davis’ haggard waitress in Of Human Bondage (1934), during the Lowe interview Ann Savage mentioned the case of Olivia de Havilland, who supposedly had to fight the 20th Century Fox brass so she could play in a realistic manner the mentally ill antiheroine in Anatole Litvak’s 1948 box office hit The Snake Pit.

Bette Davis notoriously missed out on an official Academy Award nomination for Of Human Bondage, but her standing in the industry soared as a result of her performance.

So much so that even though Claudette Colbert was 1934’s Best Actress for It Happened One Night, Davis came in second after the Academy of Motion Picture Arts and Sciences changed its rules – following a huge pro-Davis outcry – to allow write-in votes for the winners.

For her part, Olivia de Havilland won the New York Film Critics Circle’s Best Actress award and was shortlisted for an Oscar for her work in The Snake Pit.

‘By the numbers’ Lew Landers

[4] Lew Landers, who had previously directed Ann Savage in Murder in Times Square, After Midnight with Boston Blackie, and Two-Man Submarine at Columbia, had been initially attached to Detour.

As quoted in Lisa Morton and Kent Adamson’s Savage Detours: The Life and Work of Ann Savage, she found Landers “a good guy, and I liked him personally, but he painted by the numbers.”

‘Apology for Murder’ vs. ‘Double Indemnity’

[5] The femme fatale-centered plot of Apology for Murder is basically a carbon copy of the plot of Double Indemnity, based on James M. Cain’s 1943 novel – itself sharing a number of elements with Cain’s own 1934 novel The Postman Always Rings Twice.

Released by Metro-Goldwyn-Mayer, Tay Garnett’s 1946 version of The Postman Always Rings Twice stars Lana Turner and John Garfield as the lovers, and Cecil Kellaway as the unlucky husband.

[6] Starring Nina Foch, Dame May Whitty, and George Macready, My Name Is Julia Ross was a cheaply made but intriguing and technically impressive low-budget noir adapted by Muriel Roy Bolton from Anthony Gilbert’s novel The Woman in Red.

Despite the film/novel titles, there’s no actual femme fatale in My Name Is Julia Ross – unless, of course, one perceives Dame May Whitty as such.