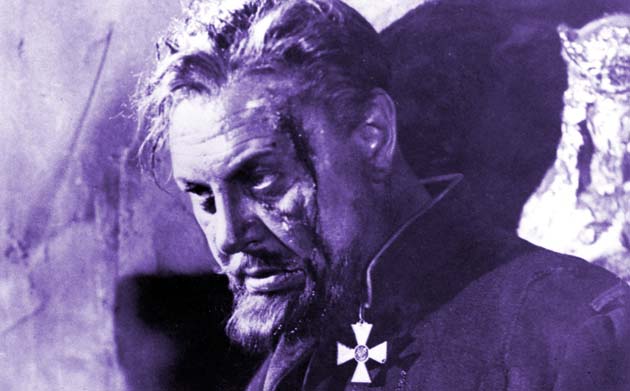 ‘The Last Command’: They don’t make ’em like they used to

Following the Jean Negulesco-directed 1943 musical short Hit Parade of the Gay Nineties – believe me, even the most rabid anti-gay bigot will be able to enjoy this one – TCM will be showing Josef von Sternberg’s The Last Command (1928) one of the two movies that earned the Swiss-born German superstar Emil Jannings the 1927-28 Best Actor Academy Award. (The other one was Victor Fleming’s The Way of All Flesh, of which only fragments remain. See also: “The Way of All Fleshplagiarized?”)

Now, I can’t recommend The Last Command highly enough. It’s surely one of the best silent films ever made – or at the very least one of the best silents I’ve ever seen. Jannings is superb as the former Imperial Russia army general who is reduced to appearing as an extra for a few dollars a day in a Hollywood movie that, as fate would have it, is being directed by a former Russian revolutionary (played by a pre-stardom William Powell). Sultry Bolshevik sympathizer Evelyn Brent was the woman in the general’s life. But should he have trusted her?

The Last Command boasts the following:

Okay, so this 1928 release doesn’t feature The Avengers or Batman or any Transformers, and its visual effects are quite modest – but if you’re not 12 years old and you have a functioning brain, you’ll lament the fact that The Last Command is the sort of glossy, adult-oriented Hollywood studio production the likes of which they rarely make anymore. 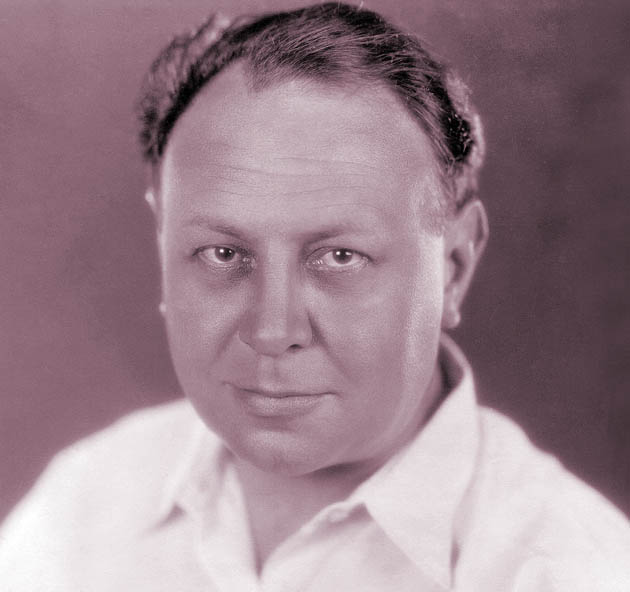 Unfortunately, the talented but thick-accented Emil Jannings opted to return to Germany right at the dawn of the sound era. He remained a major star in that country (e.g., The Blue Angel opposite Marlene Dietrich), but his name became tainted due to his association with Nazi propaganda films such as the anti-British Uncle Kruger / Ohm Krüger (1941) and Bismarck’s Dismissal / The Dismissal / Die Entlassung (1942) – both of which have the dubious distinction of being two of only four films selected as the Nazi regime’s “Film of the Nation” honorees.

Emil Jannings would later deny he was ever in cahoots with the Nazi party. Even so, he was prevented from working in the post-war years. After reportedly becoming an Austrian national, he died of cancer at age 65 on Jan. 2, 1950, in Salzburg.

As an aside, according to online sources, The Last Command is the only fully extant Hollywood film starring Emil Jannings. Fragments exist from both The Way of All Flesh and Ernest Lubitsch’s The Patriot, while Lewis Milestone’s Betrayal and Ludwig Berger’s Sins of the Fathers are (for the time being, one hopes) considered lost.

And finally, don’t buy into the idiocy that Rin Tin Tin was the Academy Awards’ actual first Best Actor winner. That self-proclaimed journalists and news publications would propagate the old joke as fact is testament to the state of the fourth estate in the early 21st century. Well, not that things were all that different in decades past.

I’ve seen it three times, but I must humbly admit I’ve never been able to fully “get” its appeal despite the following: 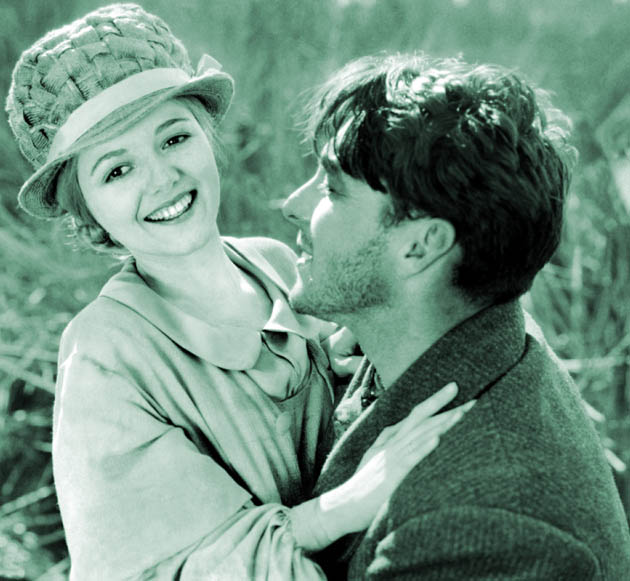 Yet, somehow, I’ve never been able to feel for the characters’ plight. One key problem is Janet Gaynor (best remembered for the first A Star Is Born), donning a ridiculous blond wig and looking so sickeningly sweet that I can fully understand why George O’Brien would feel like strangling her to scurry off to town with the enticing Margaret Livingston.

But don’t listen to me, do check it out if you haven’t already. You may end up finding Sunrise one of the greatest movies ever made, period.

I should add that Janet Gaynor took home the Best Actress Academy Award for three movies: Sunrise, Street Angel, and 7th Heaven – the latter two directed by Frank Borzage. By far my favorite of the three is the least known: Street Angel, which pairs up a beautifully touching Gaynor with frequent leading man Charles Farrell.

Edward F. Cline’s The Rag Man (1925) stars Jackie Coogan, a Charles Chaplin discovery (The Kid) that became the top child star of the 1920s. As has been the case with most child film performers, Coogan’s stardom petered out rather rapidly, though he kept on working in movies and on television all the way to his death at age 69 in 1984.

As an aside, the little boy you see in The Rag Man later on became Betty Grable’s husband, but the marriage lasted less than two years (1937–1939). About three decades later, Jackie Coogan could be seen on television as Uncle Fester in The Addams Family.

Another child performer, Baby Peggy a.k.a. Diana Serra Carey, is featured in another Edward F. Cline-directed film that Turner Classic Movies is showing this evening: Captain January (1924). Now, whether you love or abhor child stars, you must check out Captain January even if only because it features one of the best actresses of that period: Irene Rich, who, as Mrs. Erlynne, steals the show in Ernst Lubitsch’s excellent 1925 film version of Oscar Wilde’s Lady Windermere’s Fan.

Baby Peggy is still around at age 96. The Captain January presentation will be followed by Vera Iwerebor’s 2012 documentary Baby Peggy, The Elephant in the Room. 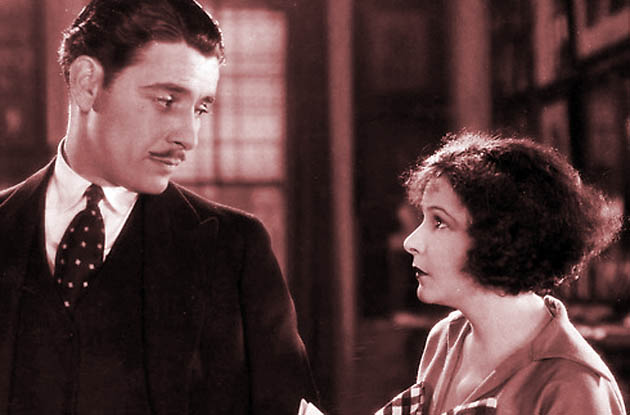 And finally, do not miss sisters Norma Talmadge and Constance Talmadge in, respectively, the light comedies Kiki (1926) and Her Night of Romance (1924) – the former directed by future five-time Oscar nominee Clarence Brown (The Human Comedy, National Velvet); the latter directed by Sidney Franklin (The Barretts of Wimpole Street, The Good Earth).

Married to powerful producer/executive Joseph M. Schenck, Norma Talmadge starred in a series of immensely popular melodramas from the late 1910s to the late 1920s. (Kiki was a change of pace.) Although hardly a household name today – because most people are too fucking ignorant about the past (or the present, for that matter) – Talmadge was as big suffering in mink as Mary Pickford suffering in rags.

Constance Talmadge’s breezy movies were less box office friendly than her sister’s dramatic star vehicles; even so, she still had a strong following and remained active all the way to the sound upheaval in 1928, opting to quit films while the going was good.

Perhaps a sound decision – no pun intended – on her part, but a major loss to film fans who have seen her act. After all, Constance Talmadge could be an outstanding, amazingly modern-looking light comedienne, just as effective as Jean Arthur, Irene Dunne, Carole Lombard, Claudette Colbert, Rosalind Russell, Katharine Hepburn, and all the others.

The end of an era

I’m assuming it’s no coincidence that Turner Classic Movies will follow its Silent Monday programming with two Al Jolson movies, both directed by Lloyd Bacon: The Singing Fool (1928) and Say It with Songs (1930). Remember that Jolson was the star of Warner Bros.’ part-talkie The Jazz Singer, the 1927 melodrama that revolutionized the art of motion picture-making.

The Singing Fool, which I’ve yet to check out, was one of the biggest blockbusters of the decade; as for Say It with Songs, it’s the sort of nauseatingly sweet concoction – daddy in prison, mommy at home, sonny boy everywhere – recommended only to those with very strong stomachs.

Jolson’s leading ladies in the former are Josephine Dunn (one of Our Modern Maidens, alongside Joan Crawford and Anita Page) and Betty Bronson (the star of Peter Pan and the Virgin Mary in the Ramon Novarro version of Ben-Hur). His leading lady in the latter is Marion Nixon, whose film career was mostly wasted in non-roles.

Among the TCM’s other movies on Tuesday, Nov. 18, are:

[1] According to the IMDb, The Last Command has costumes by Travis Banton (The Mark of Zorro, Letter from an Unknown Woman).

[2] The Academy Award for Best Unique and Artistic Production was discontinued after the first year. The other two 1927–28 nominees were King Vidor’s first-rate social drama The Crowd and Ernest B. Schoedsack and Merian C. Cooper’s pseudo-documentary Chang a.k.a. Chang: A Drama of the Wilderness.

10 Examples of Theocracy on Screen: Religion-State Authoritarianism in Multiple Forms