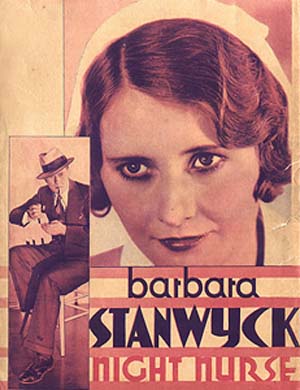 The new documentary Thou Shalt Not: Sex, Sin and Censorship in Pre-Code Hollywood and five Pre-Code films will be shown on Turner Classic Movies on Monday, March 3 (more details below).

The five racy Pre-Coders are: The Divorcee (1930), A Free Soul (1931), Night Nurse (1931), Three on a Match (1932), and Female (1933). Those are films made before religious zealots, abetted by frightened studio heads (it was the Depression, after all), put Hollywood movies in a chastity straitjacket that would last about three decades. (See also Pre-Code Paramount and Pre-Code Fox Movies.)

I couldn’t find any information on Thou Shalt Not, except that it’s a 68-minute 2008 production directed by Steven Smith. As for the five Pre-Coders, there are good news and not-so-good news:

They’re all worth a look – what with out-of-wedlock sex, homosexuality, adultery, murder, drugs, and Ruth Donnelly – and as per the TCM press release, they’ve all been digitally restored and remastered “from newly-restored film elements.” Also, there are two commentaries by Jeffrey Vance, who’s authored books on Buster Keaton and Harold Lloyd. (I’m unfamiliar with co-commentator Tony Maietta’s film history work.)

The best of the five features, all of which crackle with machine-gun dialogue, is probably Female, a racy comedy starring Ruth Chatterton as a liberated businesswoman who meets her match in the person of – ouch! – George Brent. (Adding insult to injury, hunky Johnny Mack Brown is the film’s second male lead. Chatterton should have ended up with him.)

The ending is as painfully conventional as to be expected – the big studios have always pandered to the bourgeois values, no matter how dishonest, of mainstream audiences – but in its first two-thirds Female is as subversive as a Hollywood movie – then or now – is allowed to be.

Chatterton is excellent as long as she remains the tough, sexually assertive female of the title; her performance falters, however, once her character turns all housewifey. (Note: Chatterton and Brent were married at the time Female was made. They were divorced the following year. After watching the film, I – ever a sucker for happy endings – visualized the same fate for the on-screen characters.)

Norma Shearer won an Oscar for The Divorcee, launching her 1930s superstardom as MGM’s Sophisticated Woman of the World. Shearer did better work elsewhere (e.g., The Student Prince in Old Heidelberg, Let Us Be Gay, Marie Antoinette), but it’s curious to watch a woman in 1930 (or now, for that matter) vying with her husband (Chester Morris) for the title of Biggest Cheater. The other men in her life are Conrad Nagel and Robert Montgomery.

Night Nurse is a middling William A. Wellman-Barbara Stanwyck effort about a nurse who tries to save her charge from greedy chauffeur Clark Gable. Joan Blondell, for her part, provides a few good wisecracks. I’d have liked Night Nurse better had Stanwyck hooked up with Blondell instead of Ben Lyon. But no matter how wise those two dames cracked, that sort of match-made-in-heaven was not meant to be. Not in 1931. Not in any big-studio release in 2008.

Three on a Match offers several solid dramatic moments, including a harrowing death near the end. (I won’t say who dies.) Even though of the three female leads Bette Davis is the best remembered, the film actually belongs to Ann Dvorak, playing a Good Girl Gone Bad. Of the 15 or so Dvorak movies I’ve seen, Three on a Match is by far her best showcase. Joan Blondell rounds out the female trio, while the usually excellent Warren William must – unfortunately – suffer nobly in this one.

All five features have been shown a number of times on TCM. No real rarities are included in the series or on the DVD box set.

And if I may recommend my friend Mark Vieira’s great-looking book Sin in Soft Focus (Abrams, 1999), which covers Hollywood Pre-Code years. Mark, by the way, is featured in Thou Shalt Not.

9:30 pm Thou Shalt Not: Sex, Sin and Censorship in Pre-Code Hollywood (2008)
This documentary looks at how the social, financial and moral forces all helped shape one of the most intriguing periods in Hollywood history. Black and white. 68 min.

2:30 am Thou Shalt Not: Sex, Sin and Censorship in Pre-Code Hollywood (2008)
This documentary looks at how the social, financial and moral forces all helped shape one of the most intriguing periods in Hollywood history. Black and white. 68 min.

Based on Ursula Parrott’s spicy 1929 novel Ex-wife, the highly controversial The Divorcee was nominated for four Academy Awards® including Best Picture. Norma Shearer won for Best Actress as a woman who confronts the hypocrisy of the double standard after catching her husband in a compromising position and forcing him to confess his infidelities. Her solution to the problem: try to match him tryst for tryst.

In A Free Soul, Lionel Barrymore captured an Oscar for his portrayal of a brilliant alcoholic lawyer Stephen Ashe, who successfully defends dashing gangster Ace Wilfong (Clark Gable) on a murder charge only to find that his headstrong daughter, Jan (Norma Shearer), has fallen in love with his client. Jan, a fun-loving socialite seeking freedom from her blue-blood upbringing, is only too eager to dump her aristocratic boyfriend (Leslie Howard) for the no-good gangster. She runs away from her childhood home to become Ace’s mistress, embarking on a series of seedy adventures in New York’s underbelly. Desperate to save his daughter’s tainted reputation, Stephen finds her and makes her a deal: He’ll stop drinking if she’ll stop seeing Ace. The thrilling conclusion might just tear them apart forever. Shearer and director Clarence Brown also received nominations for their work in this powerful and moving film.

The gangster melodrama, Three on a Match, stars Bette Davis, Joan Blondell and Ann Dvorak as a trio of school chums – Mary, Ruth and Vivian – meeting for a reunion ten years after high school. Director Mervyn LeRoy crams much plot into the 64 minute run time following each of the women’s lives. Mary is now a chorus girl after a stint in reform school; level-headed Ruth has a job as a secretary; and sexy Vivian is on the verge of deserting her wealthy husband Henry Kirkwood and their baby in favor of a glamorous gangster. The film is also noteworthy for the number of future stars making brief appearances, such as Lyle Talbot, Edward Arnold and, in his first gangster role, Humphrey Bogart as “The Mug.”

In director Michael Curtiz’s (Casablanca) romantic comedy Female, Ruth Chatterton plays Alison Drake, the iron-fisted president of a motorcar company. Alison oversees the daily operations of her male employees with a predatory gaze and frequently exercises her right to engage with them in any way she deems fit. She meets her match in an equally strong-minded new employee, Jim Thorne (George Brent), and the two engage in a smoldering, contentious, sexually charged duel. The action of the film – one of the first to depict a female character turning a man’s world to her advantage – feeds on the novelty of presenting a woman as a corporate shark and bedroom hound. Though it’s obvious the filmmakers thought they were creating a scenario that would never actually happen, Alison’s world-smashing exploits make the bulk of the film (before she begins to question her nontraditional lifestyle) a protofeminist romp. Brent and Chatterton were married at the time they made the film, and the natural chemistry between them is abundantly evident. Curtiz packs the screen with extravagant set design and period detail.

William A. Wellman’s (Public Enemy) Night Nurse is a sassy, unsentimental comedy about a private pediatric nurse named Lora Hart (Barbara Stanwyck) who, after applying as an apprentice in a family home, discovers there is a plot afoot to starve her two rich, fat, young charges to death. The culprit is the family’s chauffeur, Nick (Clark Gable), a villain who plans to marry the kids’ dissolute mother and make off with their trust fund. It then is up to Hart, her wisecracking nurse friend Maloney (Joan Blondell), and her bootlegger beau Mortie (Ben Lyon) to save them. Director Wellman keeps the jokes humming along with the peril.

This never-before seen documentary, Thou Shalt Not: Sex, Sin and Censorship in Pre-Code Hollywood examines the unique collision of events that resulted in one of the most dynamic – and delicious periods in Hollywood history – a fascinating mix of scandal, big business and social history.

These are valuable movies and property of history. I like to see old best movies. This is mirror of society and undersand how develope western movies.