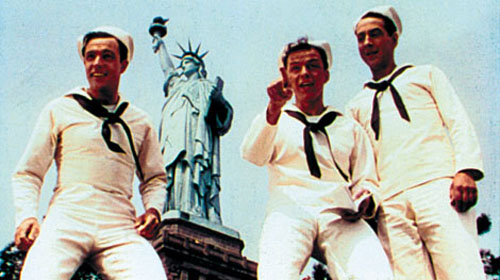 Frank Sinatra, Gene Kelly and Jules Munshin in On the Town.

Bobby-soxer-turned-blue-haired-matron idol Frank Sinatra will have his “Summer Under the Stars” day on Friday, Aug. 28.

Turner Classic Movies will show twelve of the actor-singer films, the best of which is On the Town, a zesty musical about three sailors and their three girls (four, if you include Alice Pearce) spending a day together in New York City. The three guys – Sinatra, Gene Kelly, and Jules Munshin (above) – are all likable and fine, but it’s the female quartet that does it for me: in addition to Pearce, there’s Vera-Ellen, Betty Garrett, and Ann Miller. In my view, those women are the ones who should have been the superstars of Hollywood musicals of the 1940s and 1950s. Anyhow, Kelly and Stanley Donen co-directed On the Town, while the Alfred Green-Betty Comden duo penned the screenplay, which in turn was based on their Broadway musical.

Two other Kelly-Sinatra vehicles, the Academy Award-nominated Anchors Aweigh and Take Me Out to the Ball Game, are pleasant musicals that were well-received at the time. On the other hand, The Kissing Bandit, which pairs Sinatra with Kathryn Grayson (the leading lady in Anchors Aweigh) was reportedly a major flop. This so-so musical is enlivened by the hilarious Mildred Natwick in a supporting role, and by a fiery dance number performed by Ricardo Montalban, Cyd Charisse, and Ann Miller.

Now, it’s interesting how the Frank Sinatra of the 1940s seemed like a low-key, easy-going chap, whereas the Sinatra of the 1950s – following his Oscar win for From Here to Eternity – almost always came across as smug, self-important, and more than a little slimy. There were a couple of exceptions, of course (The Man with the Golden Arm, for which he received a well-deserved Academy Award nomination; his last film, the flop The First Deadly Sin), but generally speaking I find the post-1953 Sinatra hard to stomach. (His singing, whether before or after Eternity, always made me yearn for The Beatles – and I don’t even like The Beatles.)

The World War II melodrama Never So Few, which stars Sinatra and Gina Lollobrigida, is quite likely director John Sturges’ worst film (though I still haven’t sat through Sturges’ Gunga Din remake Sergeants Three, also listed below); the musicalized comedy-drama The Tender Trap has less of interest to say about male-female relationships than Cecil B. DeMille’s silent melos of the 1910s; while Vincente Minnelli is incapable of keeping the phoniness at bay in Some Came Running, an overripe melodrama based on James Jones’ semi-autobiographical novel; the film is made tolerable by Martha Hyer’s class and by Shirley MacLaine’s kind-hearted (and, as usual, thoroughly desexualized) floozie (above).

High Society has loads of fans; in fact, this musicalized The Philadelphia Story remake was MGM’s biggest hit of 1956. Directed by usually reliable Charles Walters, High Society is pleasant to look at (cinematography by Paul Vogel) and it offers a couple of good Cole Porter compositions. Yet it’s a romantic comedy boasting all the natural lightness and charm of a metallic butterfly.

I’ve never seen Higher and Higher, but since Michèle Morgan is in it, it’s definitely worth a look.

Despite song-filled flops like Give a Girl a Break and Hit the Deck, Debbie Reynolds was a notable exception, managing to keep her stardom afloat in straight comedies and dramas – and the occasional musical – at MGM and elsewhere for another decade.

But Frank Sinatra was a particularly notable case. Following a career resurgence at Columbia by way of Fred Zinnemann’s blockbuster From Here to Eternity and a Best Supporting Actor Oscar win, Sinatra was on his way to becoming a superstar – one who, like Reynolds, would return to the old musical genre every now and then.

3:00 AM Higher and Higher (1944)
Servants pass off one of their own as an heiress in hopes of winning her a wealthy husband. Cast: Michele Morgan, Jack Haley, Frank Sinatra. Director: Tim Whelan. Black and white. 90 min.

Grace Kelly, princess consort of Monaco and I think High Society was her last film. She was so beautiful