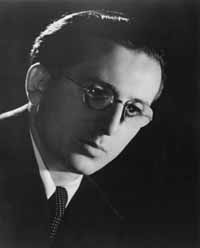 Press Release: Beverly Hills, CA – In celebration of Oscar®-winning composer Franz Waxman’s centennial, the Academy of Motion Picture Arts and Sciences will screen the 1941 films Suspicion and Dr. Jekyll and Mr. Hyde, both featuring Academy Award®-nominated scores composed by Waxman, on Thursday, October 19, at 7 p.m. at the Samuel Goldwyn Theater in Beverly Hills.

Hosted by Grammy®-winning conductor John Mauceri, founding director of the Hollywood Bowl Orchestra, the program will open with an onstage discussion with John Waxman, the composer’s son, and others.

The event will continue with Alfred Hitchcock’s thriller Suspicion, a Best Picture nominee starring Cary Grant, Sir Cedric Hardwicke, Nigel Bruce, and Joan Fontaine in her Oscar-winning performance as Lina McLaidlaw Aysgarth, a woman who believes her husband (Grant) is plotting her murder. For his work on the film, Waxman received an Academy Award nomination for Music Score of a Dramatic Picture.

Winning back-to-back Oscars for Billy Wilder’s Sunset Blvd. (1950), starring Gloria Swanson and William Holden, and George Stevens’ A Place in the Sun (1951), starring Montgomery Clift, Elizabeth Taylor, and Shelley Winters, Waxman composed more than 100 film scores and earned 12 Academy Award nominations for such films as The Young in Heart, Rebecca, The Nun’s Story, and Taras Bulba. His range allowed him to write scores for films in diverse genres, including adventures, comedies and dramas.

During the three decades he spent in the motion picture industry, Waxman also composed serious concert works, and in 1947, he founded the Los Angeles Music Festival, which he directed for 20 years. He died at the age of 60 in 1967.

Tickets to Suspicion and Dr. Jekyll and Mr. Hyde are $5 for the general public and $3 for Academy members. A single ticket will admit individuals to both features.