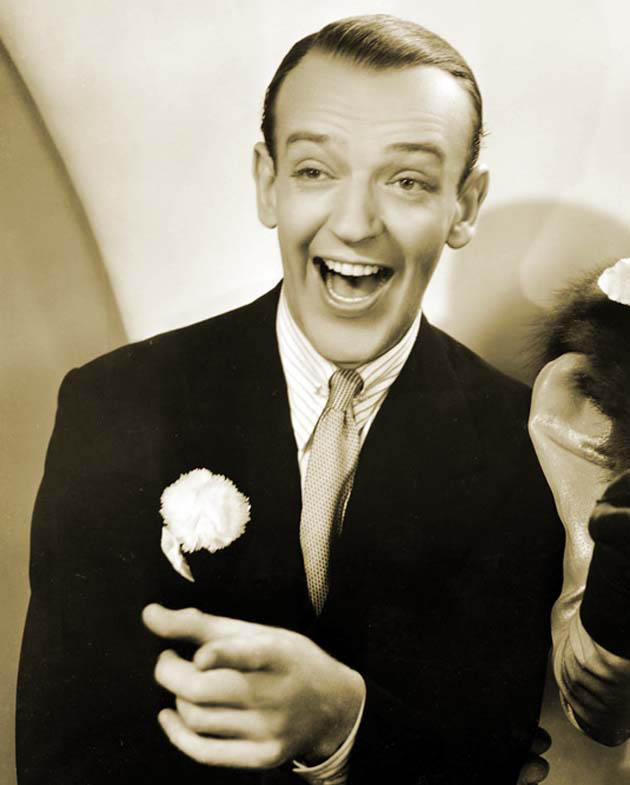 Fred Astaire movies: Dancing in the dark & on the ceiling on TCM

Aug. 5 is Fred Astaire Day on Turner Classic Movies, as TCM continues with its “Summer Under the Stars” series. Just don’t expect any rare Astaire movies, as the actor-singer-dancer’s star vehicles – mostly RKO or MGM productions – have been TCM staples since the early days of the cable channel in the mid-’90s.

True, Fred Astaire was also featured in smaller, lesser-known fare like Byron Chudnow’s The Amazing Dobermans (1976) and Yves Boisset’s The Purple Taxi / Un taxi mauve (1977), but neither one can be found on the TCM schedule. (See TCM’s Fred Astaire movie schedule further below.)

Some fans never tire of watching Fred Astaire and Ginger Rogers dancing together. With these particular fans in mind, TCM is showing – for the nth time – nine Astaire-Rogers musicals of the ’30s, all RKO releases. For the most part, these are fun enough despite their flimsy and repetitive plots. Check out Swing Time (1936) and Shall We Dance (1937) back to back and you’ll think you’re watching the same movie with a slightly different supporting cast, costumes, and song score.

Handled by future two-time Best Director Academy Award winner George Stevens (A Place in the Sun, Giant), Swing Time is generally considered the best of the Astaire-Rogers pairings. Personally, I much prefer Mark Sandrich’s Follow the Fleet (1936), in which even the usually one-note Astaire comes up with an entertaining characterization, and which features superlative Irving Berlin songs and a series of first-rate Astaire- and Hermes Pan-choreographed dance numbers.

Also of note, Harriet Hilliard – later of The Adventures of Ozzie & Harriet fame – was cast in a role originally intended for Irene Dunne.

‘The Story of Vernon and Irene Castle’

I find The Story of Vernon and Irene Castle (1939), about the famed ballroom-dancing couple, by far the weakest of the Astaire-Rogers movies. Yet, its relentless tediousness notwithstanding, this conventional backstage musical drama is notable because of its less-than-rosy ending and because it marked the demise of the Fred Astaire and Ginger Rogers duo.

Rogers would go “straight” after that one. The following year, she starred in Sam Wood’s romantic drama Kitty Foyle, which would earn her a Best Actress Oscar. Astaire, for his part, went on changing partners (and studios) and dancing with the likes of Eleanor Powell, Rita Hayworth, Joan Leslie, Betty Hutton, Leslie Caron, et al.

As an aside, Vernon Castle was seen in only one film: as himself in the (non-musical, obviously) The Whirl of Life (1915). Besides playing opposite her husband in his sole big-screen effort, Irene Castle was featured in nearly 20 movies from 1917 to 1922. Her best-known star vehicle was the notorious, William Randolph Hearst-funded Patria (1917), a rabidly nationalistic serial released prior to the United States’ entry into World War I, and in which the despicable villains were a mix of Mexicans (Wallace Beery as Pancho Villa) and Japanese (scheming Oriental Warner Oland).

Missing from the Fred Astaire and Ginger Rogers tap-dancing marathon is The Barkleys of Broadway (1949), MGM’s Charles Walters-directed color musical in which Rogers, once again wearing dancing shoes, was a replacement for a reportedly ailing Judy Garland.

Later today, you can catch Astaire dancing with Rita Hayworth – one of his best partners – in the otherwise humdrum You Were Never Lovelier (1942), a Columbia release. (They’d previously danced together in You’ll Never Get Rich.)

Another great Fred Astaire partner was Cyd Charisse, who is featured opposite him in two movies TCM will be presenting this evening: The Band Wagon (1953) and Silk Stockings (1957).

Directed by Vincente Minnelli from a screenplay by Betty Comden and Adolph Green, the former is one of those rare backstage Hollywood musicals that succeed in being lively and witty. Astaire and Charisse’s number “Dancing in the Dark” is one of the greatest ever recorded on film.

Below: Fred Astaire ‘Dancing in the Dark’ with Cyd Charisse in ‘The Band Wagon.’

Rouben Mamoulian’s great-looking Silk Stockings is one of two Ninotchka remakes that came out in the mid-’50s. (The other one was The Iron Petticoat, with Katharine Hepburn.) In the old Greta Garbo role, Cyd Charisse plays a constipated Soviet envoy who loosens up after falling for a happy-go-lucky American movie producer (Astaire).

Set in London at the time of then princess Elizabeth’s wedding, Royal Wedding (1951) is what’s usually referred to as “cute,” which could be interpreted as either appealing or nauseating. Jane Powell is appealing; the movie itself quite a bit less so despite Fred Astaire’s memorable dancing on the ceiling number and the fact that it was directed by Stanley Donen (On the Town, Seven Brides for Seven Brothers).

Below: Fred Astaire dancing on the ceiling in ‘Royal Wedding’

If you don’t like Astaire movies, then don’t waste your time writing about his movies. I, for one, never tire of his movies. His dancing is phenomenal! As for 1930’s movie musical plots, they were just developing if you are up with movie making history. Fred Astaire had much to do with changes for the good; like nixing geometric kelidoscope multishot wonders (yawn) to insisting on head to toe shots and no cutaways during the dance. Astaire changed both Broadway & Hollywood musicals for the good. He made them pallitable to the masses instead of 19th century operettas reworked for unimaginable directors and producers.