From Here to Eternity movie: Deborah Kerr and Burt Lancaster make love (top); Montgomery Clift and Frank Sinatra do a little (sorta) lovemaking of their own later on in the film (bottom).

Fred Zinnemann’s 1953 Academy Award-winning drama From Here to Eternity, starring Burt Lancaster, Montgomery Clift, Deborah Kerr, Donna Reed, and Frank Sinatra, will be screened by the Academy of Motion Picture Arts and Sciences on Wednesday, Nov. 18, at 7:30 p.m. at the Samuel Goldwyn Theater in Beverly Hills. The presentation will feature the premiere of a new digital restoration, as well as an onstage discussion with Ernest Borgnine, who has a supporting role in the film.

Adapted by Daniel Taradash from James Jones’ bestselling novel about intricate relationships at a Hawaii military base shortly before the Japanese attack on Pearl Harbor, From Here to Eternity was a major critical and box office hit upon its release. Joan Crawford had been cast as the female lead, but reportedly withdrew from the project following disagreements over her costumes. Although Crawford would have been great as the adulterous army wife, Deborah Kerr is flawless in the role. In fact, Kerr, somewhat cast against type, and Donna Reed, totally cast against type as the most stylish sex worker this side of Tonga, are the two best things about From Here to Eternity.

I remember watching From Here to Eternity right after Elia Kazan’s A Streetcar Named Desire, made two years earlier. I was surprised at how one movie could have dated so badly, while the other felt as fresh and as powerful as when it first came out in 1951. For unlike A Streetcar Named Desire, the dialogue, the relationships, and much of the acting in From Here to Eternity feels both calculated and disconcertingly old-fashioned.

I’m sure that everyone involved in the film was bent on creating “adult entertainment” of the finest kind; the problem, however, is that apart from Kerr’s and Reed’s performances, Ernest Borgnine’s sadistic sergeant (above), and Burnett Guffey’s naturalistic cinematography, all that effort is too painfully obvious on screen. Even Montgomery Clift, who could be a highly effective actor, creates a mannered, superficial rebel-turned-conventional hero-soldier. (His drunken scene with Burt Lancaster is an embarrassment to watch.) Had From Here to Eternity placed its focus on the female characters – and to hell with all the military guys – it would have been a masterpiece. Too bad that didn’t happen.

Now, would I ever tell anyone not to bother with From Here to Eternity? Much to the contrary. This pre-World War II melodrama is the kind of movie that every person interested in film or film history should watch at least once. And considering that the Academy will be presenting a restored print, it’s quite possible that Burnett Guffey’s already impressive black-and-white cinematography will look better than ever before. Or at least better than in the last four decades or so, when all those Hawaiian grey hues began losing some of their shades and contrasts. Additionally, the film offers Deborah Kerr and Donna Reed in top form – and Burt Lancaster does look good in swim trunks. In other words, From Here to Eternity is not to be missed.

The new digital restoration by Sony Pictures was made from the only original elements still in existence, the fine-grain master positive, which was scanned at 4K to create a new 35mm negative, and features a digitally restored original soundtrack.

By the way, Deborah Kerr lost the best actress Oscar to Audrey Hepburn in Roman Holiday. Three days later, Kerr lost another show-biz match to Hepburn, who won a Tony for Ondine. (Kerr had been in the running for Tea and Sympathy.)

And I’m assuming everyone knows this story, but just in case: the whiny actor in The Godfather who gets a much-coveted film role after a Hollywood mogul gets his favorite horse’s head in bed is – a creative representation of – Frank Sinatra making his comeback in From Here to Eternity. For a mere $8,000, Sinatra (above, playing soldier with Montgomery Clift) replaced original choice Eli Wallach. 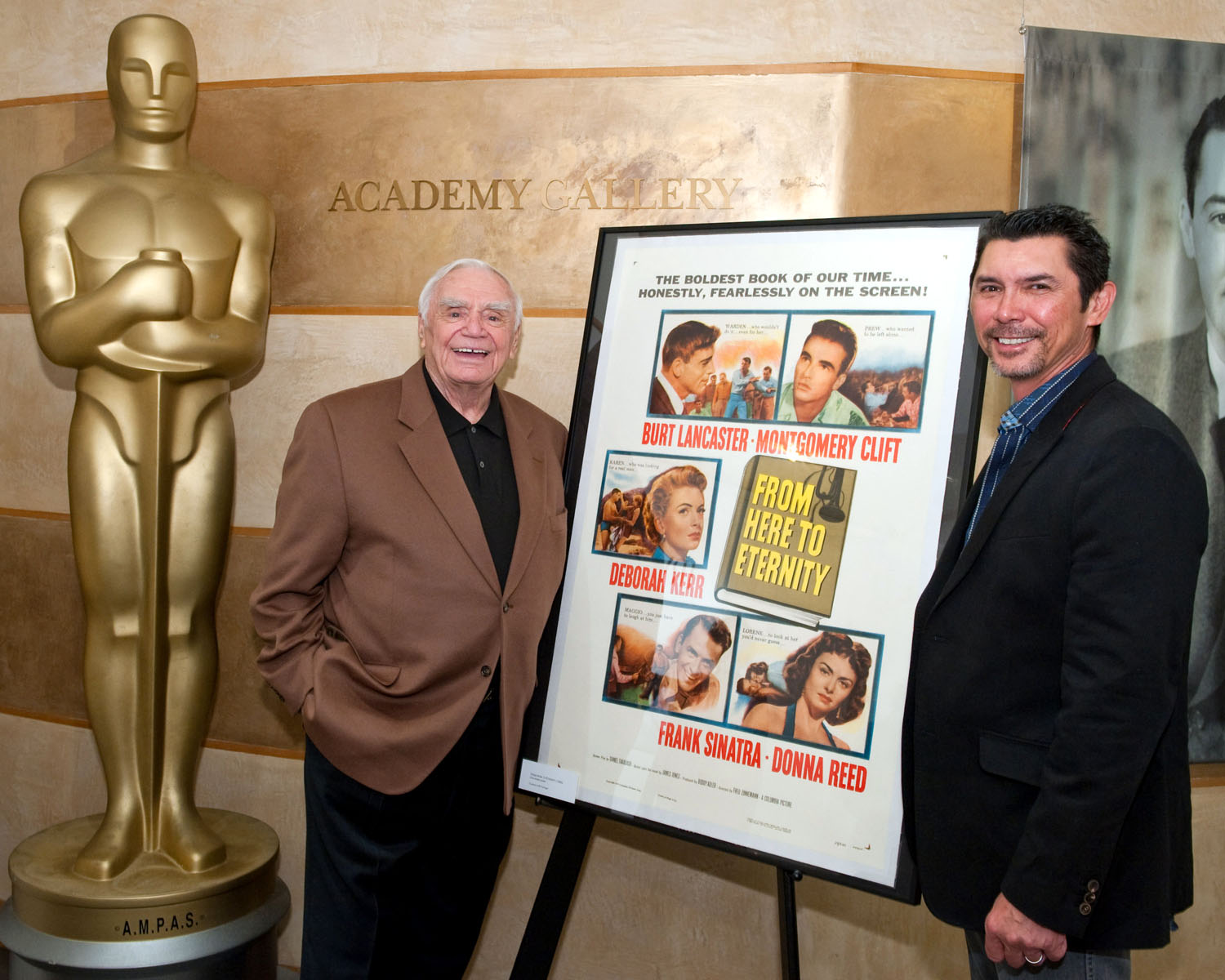 Ernest Borgnine and Lou Diamond Phillips pose next to a poster of Fred Zinnemann’s From Here to Eternity, prior to a screening of the 1953 classic presented by the Academy of Motion Picture Arts and Sciences on Wednesday, Nov. 18, at the Samuel Goldwyn Theater in Beverly Hills. Phillips hosted the event.

Nov. 23 update: Winner of the 1953 best picture Oscar and one of the biggest blockbusters of the 1950s, From Here to Eternity stars Burt Lancaster, Montgomery Clift, Deborah Kerr, and Academy Award winners Frank Sinatra and Donna Reed. Ernest Borgnine has a supporting role in the film as a military officer who makes life hell for both Clift and Sinatra.

Two years later, Borgnine would win a best actor Oscar for his – much more sympathetic – performance in Marty. 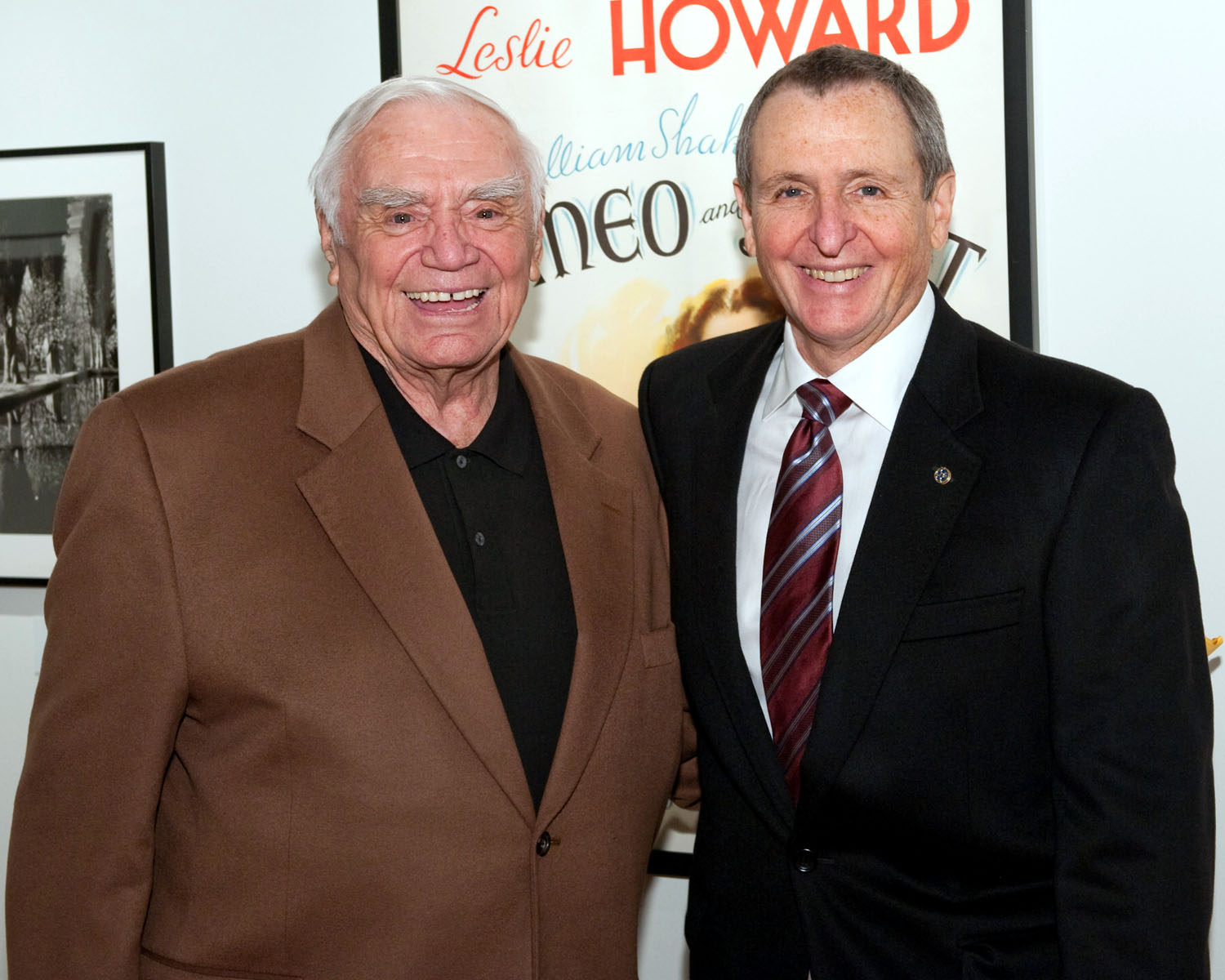 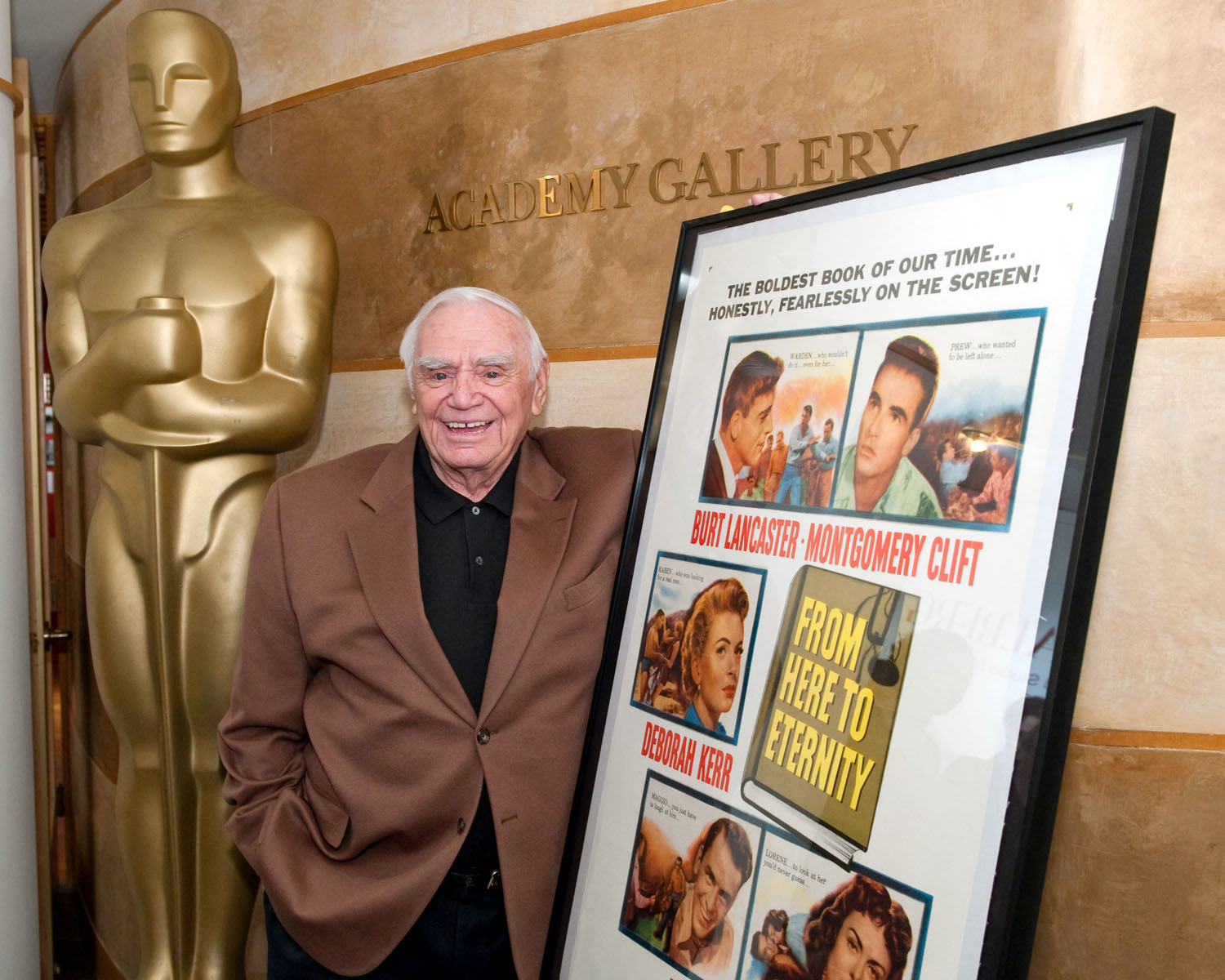 From Here to Eternity images: Courtesy of the Margaret Herrick Library.

Nope From Here to Eternity has aged perfectly okay and telling it from the female point of view would bring it down.

Andre, again, I’m a day late and a dollar short in reading your reviews. Being a Deborah Kerr fan, I recently purchased this film. I’d seen it before, but this time I really wanted to pay attention to all of the details. It is now one that I’ve watched three times in the last few months. I agree with you on the female performances. They were outstanding. It was refreshing to see both, Deborah Kerr and Donna Reed, cast against type. I think that Fred Zinnemann was a genius with that decision. Not being a Joan Crawford fan, I think that this film would have been completely different had she played Karen. She was the queen of bad girls and, in this case, I think that she just would have been too old for the part. That late, great teddy bear Ernest Borgnine’s “Fatso” gave me the chills every time he was on screen. He was absolutely menacing. I’m not really a Monty Clift fan either, however, there is one scene where he plays “Taps” in honor of Maggio that absolutely kills me EVERY time. I’d heard someplace that he actually learned to play in order for it to be authentic. I liked Burt Lancaster in this role. Holy cow! He rocked that military uniform! Everyone talks about the bathing suit, but , for me, it was the uniform that did me in.
All in all, it is a great movie. I had a thing for “Streetcar” for years and watched it, again, recently. I have to admit that it didn’t give me the same thrill as it did when I was a teen/young adult. I saw Ann-Margret play “Blanche” in the television version and I felt that her potrayal was beautifully nuanced and more heartbreaking than the lovely Miss Leigh’s. I’m just sayin’. We all think that we can be serious critics sitting at home in our pajamas.
Thank, again, for great writing on my all-time-favorite person in motion picture. I feel that we are so lucky have such easy access and can enjoy at our leisure the golden age of cinema.

Many thanks for your comments, Karen. Much appreciated.

I have exactly the opposite reaction regarding Eternity and Streetcar. I find Streetcar absolutely unbearable, while From Here to Eternity is one that I return to again and again. Vive le difference :-)