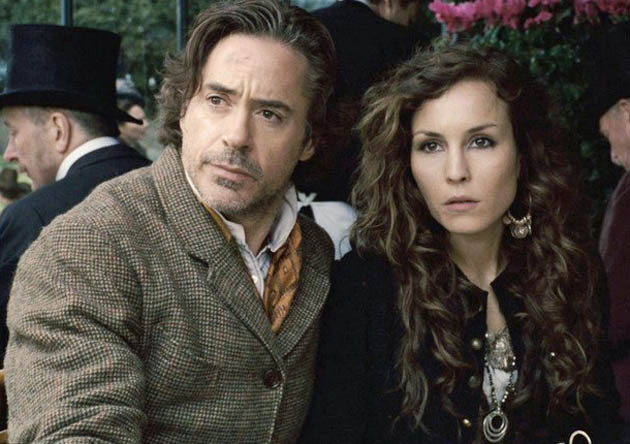 Dec. 18 update: Starring Robert Downey Jr. and Jude Law, Guy Ritchie’s Sherlock Holmes: A Game of Shadows hasn’t exactly “saved” the North American box office despite the estimated $40.02 million it earned (or rather, is earning) this weekend, Dec. 18–20, at 3,703 locations, including $1.25 million from Thursday midnight screenings.

In fact, A Game of Shadows failed to shake things up because it earned slightly over $40 million. After all, the original Sherlock Holmes collected $62.3 million on Christmas weekend 2009 (admittedly, when people were out of school/work) while last week’s predictions had A Game of Shadows bringing in anywhere between $55 and $60 million.

I’m not sure if many have used the word “flop” in reference to a movie that grossed $40 million over the course of three days. But unless things pick up dramatically next weekend and the following one – the Monday holiday should help things some – Sherlock Holmes: A Game of Shadows will be just that – a flop – at the domestic box office.

The Sherlock Holmes sequel cost a reported $125 million, or about 30 percent more than the original. Even when ignoring the tens of millions spent on marketing and distribution, in order for Warner Bros. and fellow producing companies to recoup their investment at the domestic box office A Game of Shadows would have to rake in around $235–$250 million.

The original Sherlock Holmes went on to gross $209.02 million in the U.S. and Canada, in addition to $315 million internationally. Its worldwide total was $524.02 million.

Reviewers, for their part, have been anything but enthusiastic about the sequel. A Game of Shadows has a mediocre 46 percent approval rating and 5.4 average among Rotten Tomatoes‘ top critics. For all that is worth, the film does have an “A-” CinemaScore rating.

International market to the rescue

Now, for the good news: Sherlock Holmes: A Game of Shadows has earned $14.5 million abroad after opening in a mere six territories, with most major ones (e.g., Russia, Japan, France, Germany, Brazil, Spain) yet to come.

Moral of the story: At least for now, if you’re looking for a Mighty Savior to rescue the Hollywood studios from the dainty North American box office – down this weekend about 12 percent from last year – don’t look for any particular movie. Look overseas, for other countries.

Alvin and the Chipmunks: Chip-Wrecked trailer with Jason Lee and a group of squeaky-voiced furry creatures. Like Sherlock Holmes: A Game of Shadows, another domestic box office underperformer this Christmas season.

Also underperforming – especially compared to its predecessor – is Mike Mitchell’s animated feature Alvin and the Chipmunks: Chip-Wrecked, which collected an estimated $23.5 million at no. 2 over the weekend, as per boxofficemojo.com.

Back on Christmas 2009, Alvin and the Chipmunks: The Squeakquel pulled in $48.87 million on its debut weekend. At that time, the Chipmunks even surpassed James Cameron’s mighty Avatar on their first day out, Dec. 23.

Movie reviewers have overwhelmingly disliked Alvin and the Chipmunks: Chip-Wrecked, which has a sinking 12 percent approval rating and 3.4 average among Rotten Tomatoes‘ top critics.

Things overseas haven’t been all that great, either. In 38 territories (including Spain and the U.K.), Chip-Wrecked has earned $14.5 million, or slightly less than Sherlock Holmes: A Game of Shadows in a mere six markets.

But since this is a kiddie flick, business should pick up considerably during the holiday season. The Squeakquel went on to gross $443.14 million worldwide; the first Alvin and Chipmunks (2007) took in $361.33 million.

Ah, and before anyone comes up with the nonsensical idea that Americans and Canadians have gotten tired of sequels in 2011, just check out the list of biggest blockbusters of the year. The top seven movies are all sequels:

Dec. 17 update: With the underwhelming debuts of the Robert Downey Jr. actioner Sherlock Holmes: A Game of Shadows and the kiddie flick Alvin and the Chipmunks: Chip-Wrecked, the silver lining at the North American box office this weekend is the Brad Bird-Tom Cruise $140 million-budgeted collaboration Mission: Impossible – Ghost Protocol, which has raked in an impressive, IMAX-boosted $4.6 million – including $1 million from Thursday midnight showings – at only 425 locations (300 of which IMAX theaters).

As per The Hollywood Reporter, Ghost Protocol should bring in $12 million by Sunday evening. If so, that would represent an outstanding, even considering the IMAX surcharges, $28,400 per-theater average.

At a little more than one tenth the number of theaters, Mission: Impossible – Ghost Protocol is expected to take in more than one fifth of the inflation-adjusted gross of its predecessor. IMAX surcharges or no, that’s quite impressive.

Internationally, however, the third installment in the Mission: Impossible franchise fared much better, earning $263.82 million. Its worldwide total was $397.85 million – the eighth biggest that year.

Not bad for a “flop” that even led the head of (Paramount’s parent company) Viacom, Sumner Redstone, to publicly berate Tom Cruise for his Oprah Winfrey and Brooke Shields antics. (Cruise’s crass, vulgar Les Grossman is an obvious – and quite funny – Redstone parody.)

‘New Year’s Eve’ has nothing to celebrate

In other box office news, last weekend’s top movie, Garry Marshall’s all-star New Year’s Eve, was down two spots with about $2.4 million at no. 3 on Friday, and an estimated $7.7 million for the weekend.

Despite the presence of Zac Efron, Michelle Pfeiffer, Jessica Biel, et al., if these estimates are correct, after ten days New Year’s Eve will have earned less than half (about $25 million) of the $56.26 million its Marshall-directed, all-star predecessor Valentine’s Day raked in on its debut weekend in February 2010.

Sherlock Holmes: A Game of Shadows trailer with Robert Downey Jr., Jude Law, Noomi Rapace, and (an unbilled) Rachel McAdams. Surely not the sort of adventure tale Arthur Conan Doyle had envisioned back in his day.

Lest we lose all hope, two tough, middle-aged male stars and a bunch of squeaking chipmunks are expected to turn things around. Enter Robert Downey Jr. in Guy Ritchie’s Sherlock Holmes: A Game of Shadows, Tom Cruise in Brad Bird’s Mission: Impossible – Ghost Protocol, and the titular stars of Mike Mitchell’s Alvin and the Chipmunks: Chip-Wrecked.

The battle of the sequels: ‘Mission: Impossible – Ghost Protocol’ vs. ‘Sherlock Holmes: A Game of Shadows’

That’s about as much as – not adjusted for inflation – Mission: Impossible III earned in 2006 at 2,000 sites. Helping matters some were previews of The Dark Knight Rises at a few dozen or so IMAX locations.

Considerably less successful at midnight Thursday shows were Robert Downey Jr. and Sherlock Holmes: A Game of Shadows, also featuring Jude Law, Rachel McAdams, and the original The Girl with the Dragon Tattoo actress Noomi Rapace. The actioner opened with a relatively modest $1.25 million from 1,650 screens.

Back in late December 2009, the original Sherlock Holmes opened with $62.3 million. Expect A Game of Shadows to have a markedly more modest debut.

Dec. 11 update: The worst weekend at the North American box office since September 2008, with an overall take of $78 million.

Thanks to a name cast that includes teen icon Zac Efron, Sex and the City actress Sarah Jessica Parker, Oscar winner Halle Berry, and Oscar nominee Michelle Pfeiffer, some had been expecting that New Year’s Eve would open around $30 million. Later on, $20 million became an acceptable figure. But $13.7 million?

Chances are Marshall’s New Year’s Eve movie won’t get even close to matching its $56 million budget at the domestic box office – let alone being able to recoup it. 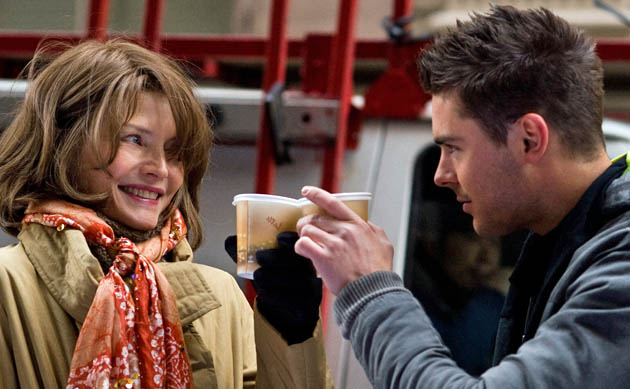 New Year’s Eve with Zac Efron and Michelle Pfeiffer. Garry Marshall’s all-star critical disaster New Year’s Eve has also turned out to be a box office bomb, opening with less than half the amount earned by its predecessor – Marshall’s all-star Valentine’s Day – in February 2010. Younger man Zac Efron, whose credits range from the High School Musical flicks to Me and Orson Welles, and older woman Michelle Pfeiffer, whose credits range from Scarface to Chéri, are two of the members of the extensive New Year’s Eve cast, which also includes Oscar winners Hilary Swank, Halle Berry, and Robert De Niro.

One element that He’s Not That Just into You and Valentine’s Day have in common – but that is missing from New Year’s Eve – is Bradley Cooper. When Garry Marshall comes up with “Veterans Day” or “President’s Day” or just plain “Easter,” he might want to ensure that Cooper is somewhere around.

On a positive note, New Year’s Eve opened internationally with an acceptable $12.6 million in 36 territories.

‘The Sitter’ lands with a thud

Expectations for the R-rated Jonah Hill comedy The Sitter were quite low to begin with. After earning an estimated $3.72 million on Friday, The Sitter seemed doomed to gross $1–$2 million less than the most modest predictions of about $10–$11 million.

As it turns out (if estimates are accurate), the 20th Century Fox release managed to pull in $10 million, at the lower end of – but still within – expectations. These days, that’s good news.

The Sitter‘s per-theater average was a weak $3,636 at 2,750 locations. Directed by David Gordon Green, The Sitter cost a reported $25 million. Also in the cast: Sam Rockwell and Ari Graynor.

Note on the current state of the North American box office: not a single movie on the Top 12 chart averaged more than $6,000 per theater. Only The Descendants had an average above $5,000 – and that’s the only movie playing in less than 1,800 locations. (The fewer the number of theaters, the higher the per-theater average should be.)

Monster Movie vs. ‘Women’s Picture’: Which Was the Big Winner?

Despite the festival season Breaking Dawn Part I indeed did a rocking business worldwide .It tuled the box office for straight 5 weeks with all the competitors way behind.

I saw this movie! Tom Cruise is amazing

Been there, Done that. and the celebs in Valentines Day were a LOT more appealing (bradley cooper, shirley mcclaine, the catchy Taylor2, julia roberts, jamie fox, anne hathaway, george lopez etc) …plus blown up blue condoms don’t have much appeal…..