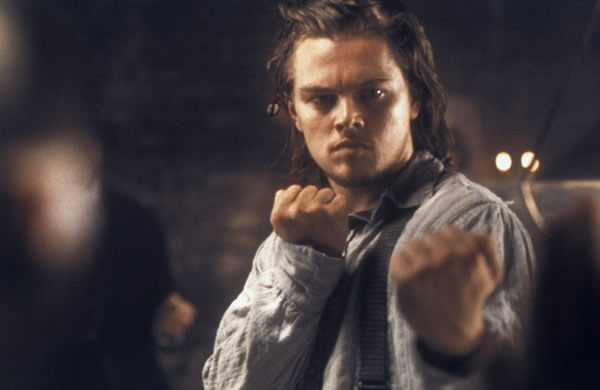 Martin Scorsese’s gripping 2002 Best Picture nominee Gangs of New York is the next feature in the Academy of Motion Picture Arts and Sciences’ “Great To Be Nominated” series. The period drama will be screened on Monday, July 14, at 7:30 p.m. at the Academy’s Samuel Goldwyn Theater in Beverly Hills. (The Academy press release makes no mention of either guest speakers or a post-screening discussion.)

Admired by some, reviled by others, Gangs of New York, despite its not inconsiderable flaws, is in my invariably humble opinion the second-best Martin Scorsese flick. (My favorite Scorsese effort is the largely forgotten – and utterly un-Scorseseish – 1985 dark comedy After Hours.) Set in 19th-century Manhattan, where poverty abounds, gangs rule whole neighborhoods, strict geographic class lines separate the Edith Wharton wealthy types from the rabble, and both the elite and the government are corrupt all the way to their rotting core (some things never change), Jay Cocks’ screenplay mainly focuses on a father-son drama of betrayal featuring two actors in top form, Daniel Day-Lewis (whose penchant for scenery-chewing is actually quite effective this time around) and Leonardo DiCaprio.

Also in the cast: a laughably miscast Cameron Diaz, Jim Broadbent, Liam Neeson, Henry Thomas, John C. Reilly, and Brendan Gleeson. Scorsese himself has a bit part as a rich man having dinner with his family.

Perhaps the chief reason for the film’s lack of love at the Academy Awards ceremony was that, as I mention on this site’s Gangs of New York page, “during the run-up to the Oscars in early 2003, Miramax and former Academy president and two-time Oscar-winning director Robert Wise … were heavily criticized for an opinion piece published in the Los Angeles Daily News and the Long Beach Press-Telegram in which Wise endorsed Martin Scorsese for an Academy Award. It was later revealed that the article had been written by publicist Murray Weissman, then working for Miramax’s Oscar campaign.”

Chris Stenner, Arvid Uibel, and Heidi Wittlinger’s Oscar-nominated animated short Das Rad will be screened prior to the feature.

‘Dreamgirls’ & ‘There Will Be Blood’: ‘Second-Best’ Oscar Nominees Revived