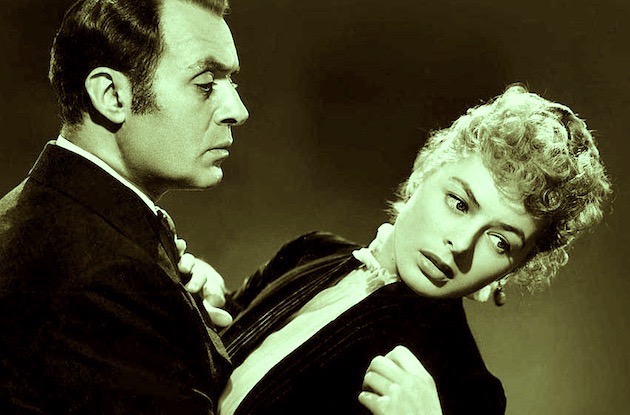 According to The Guardian, British filmmaker Joe Wright is supposed to make his American directorial debut by way of the new Gaslight. Wright is best known in the U.S. for last year’s generally well-received (and not very good) Pride & Prejudice, starring Best Actress Oscar nominee Keira Knightley as Jane Austen heroine Elizabeth Bennet.

Abi Morgan, who won a BAFTA for co-writing the 2004 British miniseries Sex Traffic, has been assigned to write the updated Gaslight, which will be set in contemporary California instead of late 19th-century London.

Hollywood no longer has any imagination?

Now, before anyone criticizes today’s Hollywood for having absolutely no imagination – what? Another remake? – they should remember that the 1944 Gaslight was a remake of a 1940 British release, itself an adaptation of Patrick Hamilton’s play Gas Light – two words – which opened in December 1938 at London’s Richmond Theatre, with Dennis Arundell and Gwen Ffrangcon-Davies in the lead roles.

Reportedly more faithful to Hamilton’s play and considered in some quarters to be superior to the more polished but stately paced Cukor version, the Thorold Dickinson-directed 1940 Gaslight stars another suave “continental” actor, Vienna-born Anton Walbrook (The Red Shoes, Lola Montès), as the villainous husband. His gaslighting victim in this particular version is a through-and-through Englishwoman: Diana Wynyard (Best Actress Academy Award nominee for Cavalcade, for the period 1932–33).

After MGM acquired the rights to Gaslight, the studio is supposed to have ordered all prints of the 1940 version destroyed so as to avoid comparisons to the Boyer-Bergman remake. Copies of the Walbrook-Wynyard Gaslight, however, are still around. In fact, the British version has been shown on Turner Classic Movies several times. (Update: In late 2013, the British Film Institute released on DVD/Blu-ray a restored print of the 1940 Gaslight.)

In the U.S., the British original is known as Angel Street – the title of the Broadway production that opened in December 1941 at the John Golden Theatre. Vincent Price and Judith Evelyn starred as the dysfunctional married couple.[1] To avoid confusion, the MGM remake was released as The Murder in Thornton Square in Britain.

The only winners were Bergman, who also won a Golden Globe (at the time a minor, relatively little-known award), and the Gaslight art directors/set decorators.

Cukor, along with John Cromwell – for the David O. Selznick blockbuster and Best Picture Oscar nominee Since You Went Away – were the two notable omissions from the Best Director roster. Their spots were taken by Otto Preminger (Laura) and Alfred Hitchcock (Lifeboat).

Gaslight 1940 with Diana Wynyard and Anton Walbrook: Gaslighting abuse victim and victimizer. Most people seem to ignore the fact that George Cukor’s 1944 Gaslight is a remake of Thorold Dickinson’s 1940 British thriller of the same name (in the U.K.; in the U.S. it was renamed Angel Street). In both movie versions, the victimizer is played by a “continental” European: Vienna-born Anton Walbrook in 1940; Frenchman Charles Boyer in 1944. But whereas the 1940 film stars an Englishwoman, London-born Diana Wynyard, as the gaslighting abuse victim, in the 1944 remake she’s played by another “continental,” Stockholm-born Ingrid Bergman.

A Selznick contract player, Bergman – hardly at her best in Gaslight – landed the role after MGM star Hedy Lamarr turned it down. Curiously, the same year Cukor’s thriller came out Lamarr was seen in the similarly themed Experiment Perilous, directed by Jacques Tourneur and co-starring Paul Lukas and George Brent.

In the Encyclopaedia Britannica, Brian Duignan describes gaslighting abuse as “an elaborate and insidious technique of deception and psychological manipulation …. Its effect is to gradually undermine the victim’s confidence in his own ability to distinguish truth from falsehood, right from wrong, or reality from appearance, thereby rendering him pathologically dependent on the gaslighter in his thinking or feelings.”

In the Gaslight movie versions, Anton Walbrook/Charles Boyer attempts to drive Diana Wynyard/Ingrid Bergman crazy by pretending that real-life incidents – engendered by the gaslighter himself – are taking place only in the victim’s imagination. Examples include disappearing objects, the sound of footsteps in (purportedly) empty rooms, and the inexplicable dimming of gaslights inside their mansion.

And that final technique explains why the expressions “gaslighting” and “gaslighting abuse” have the Gaslight play/movies as their sources.

No ‘Gaslight’ remake to date

August 2018 update: As it turns out, early 21st-century moviegoers have been spared from the Anton Walbrook/Charles Boyer kind of gaslighting abuse, as no Gaslight remake has reached the screen in the last dozen years.

[1] As Angel Street, Gaslight was revived on Broadway in 1948, with José Ferrer and Uta Hagen as the leads. The 1975 revival starred Michael Allinson and Dina Merrill.

In London’s West End, Andrew Woodall and Rosamund Pike starred in a restaging of Gaslight in 2007.

On the radio, Charles Boyer and Ingrid Bergman reprised their roles on a 1946 broadcast of Gaslight for the Lux Radio Theatre. The following year, Boyer was back on The Screen Guild Theater, co-starring Susan Hayward as his victim.

FYI, the DVD of Gaslight, which I bought more than 10 years ago now, has both the English and American versions. Both have their good points.

Unlike the author, I much prefer the Cukor/Bergman/Boyer version to the earlier film. One of Bergman’s weakest? Different strokes, I guess!

While I am very familiar with the 1944 version of Gaslight, I only recently saw the 1940 version … and found your site hoping to find that a remake was in the works. I think both versions have flaws and merits as you both point out. Maybe a good remake would include the merits fro both. Do you know if a remake is still moving forward? With who? I can’t say I’m a big fan of Wright: while I liked Atonement and Hanna, I found the script of Pride & Prejudice and casting of Anna Karenina difficult. If I had my choice of director’s for Gaslight: Darren Aronofsky would be on the shortlist. Cheers from Canada