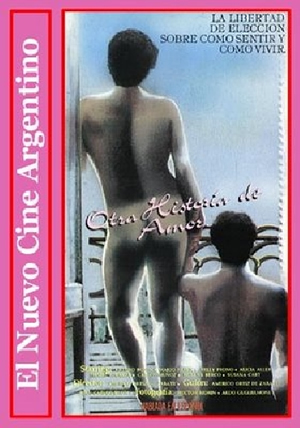 Américo Ortiz de Zárate’s Otra historia de amor / Another Love Story (1986), Monika Treut’s My Father Is Coming (1982), and Evgeny Afineevsky’s Oy Vey! My Son is Gay! (2009) are a few of the screenings to be held at the 25th Torino GLBT Film Festival on its closing night, Thursday, April 22.

Set in New York’s East Village, My Father Is Coming is described by the festival’s press release as “a mix of [Woody] Allen …, Fassbinder minus the campiness, and [John] Waters without Divine.” In the film, a German actress wannabe has her life turned upside when her father shows up in town.

In Oy Vey! My Son is Gay!, a young man decides to come out to his traditional Jewish family by introducing them to his boyfriend at a wedding ceremony. Evgeny Afineevsky will be in attendance to present the film.

Other Thursday screenings at the Torino festival include James Ivory’s The City of Your Final Destination, Hormoz’s J’ai rêvé sous l’eau / I Dreamt Under the Water, Russell Mulcahy’s Prayers for Bobby, and Enrique Buchichio’s Leo’s Room.

Set in 1920s Paris, Boy in a Bathtub tells the story of a courtesan who seduces a very young man – only to turn him into an androgynous “love slave,” with whom his/her mistress can do as she pleases.

Also at Torino, the international premiere of Rosa von Praunheim’s New York Memories, in which the filmmaker, accompanied by his new partner, Oliver, follows the same terrain he covered two decades ago in Survival in New York. The new film features old archival footage of Andy Warhol, Divine, and Harvey Milk.

Uruguayan filmmaker Enrique Buchichio’s semi-autobiographical feature debut Leo’s Room / El cuarto de Leo follows a young man who can’t quite find a satisfying romantic relationship in his life. He hasn’t been lucky with women, but doesn’t seem to be into guys, either. Things get more complicated in this melancholy comedy when he meets an old school girlfriend and her gay buddy.

Aluizio Abranches’ incestuous gay brothers drama Do Começo ao Fim / From Beginning to End, an arthouse hit in Brazil, was screened on Tuesday.

Other Torino screenings on Wednesday, April 21, include Paul Morrison’s Little Ashes, starring Twilight idol Robert Pattinson as Salvador Dali (!) and Javier Beltrán as Federico Garcia Lorca. Set in 1920s Spain, Dali is portrayed as a closet case in love with Lorca, who ended up killed by Franco sympathizers during the Spanish Civil War. Future filmmaker Luis Buñuel (Matthew McNulty) is depicted as an anti-gay grouch. Producer Carlo Dusi will be present at the screening. No word on Pattinson.

Eytan Fox’s Mary Lou will have its international premiere at Torino as well. Fox, the director of Walk on Water and The Bubble, will present to introduce the film, described as a coming-of-age musical in which a young man moves to Tel Aviv where he becomes famous as a drag queen named Mary Lou. Music by Svika Pick.

Frank Ripploh’s early gay classic Taxi zum Klo (Taxi to the Toilet), which is sort of like the sexually explicit gay male version of Looking Mr. Goodbar – minus the moralistic ending. Get ready for some kinky action if you decide to catch this one. Ripploh died of cancer in 2002.

In the “Focus: My God, religion and homosexuality” sidebar, Chaim Elbaum’s And Thou Shalt Love and Haim Tabakman’s Eyes Wide Open will be screened.

Tom Ford’s A Single Man, about a bereaved college professor (Colin Firth) in 1960s Los Angeles, was chosen as the “outstanding wide-release film” at the 21st annual GLAAD Media Awards, presented by the Gay & Lesbian Alliance Against Defamation at the Hyatt Regent Century Plaza Hotel in LA.

According to Ford’s longtime partner, Richard Buckley, the designer-turned-filmmaker was stuck in London as a result of the Icelandic volcanic ash.

“We have so much love for our own Chris Colfer, who at age 19 when the media came calling, Chris was true to who he is instead of waiting to announce (that he’s gay) at 40 when it doesn’t matter,” Murphy said. “This show is about arts education and inclusion, and we are using the show in a great way.”

Other GLAAD Award recipients were Drew Barrymore, who was handed the Vanguard Award, and Wanda Sykes, given the Stephen F. Kolzak Award, which goes to a non-heterosexual media professional promoting equal rights for, well, non-heterosexuals.

“I want to thank the Fox network for allowing me to do the show I’m doing,” Sykes remarked in her acceptance speech. “It’s like Rupert Murdoch buying back all the hate – like I’m saving him from going to hell.”

Constance McMillen received a standing ovation when she showed up onstage to present Sykes her prize. McMillen is the Mississippi teenager whose high school opted to cancel its prom rather than allow the student to bring her girlfriend to the party. (An “informal” prom was staged elsewhere; McMillen wasn’t invited.)

In LITTLE ASHES, Javier Beltran was excellent at portraying his character, a truly beautiful movie that didn’t get the distribution it deserved.