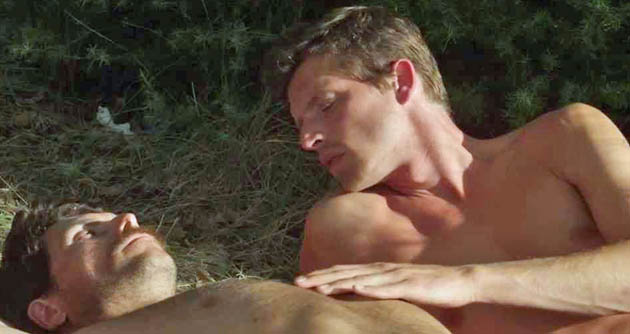 Set near an idyllic lake where hot-and-heavy gay cruising takes place during the summer season, Guiraudie’s sexually charged thriller revolves around Franck (Pierre de Ladonchamps), a young man who falls in lust with brawny suspected murderer Michel (Christophe Paou). Strand Releasing will handle the distribution of Stranger by the Lake in North America.

‘Stranger by the Lake’: Mixing explicit sex with explicit love

As quoted by Agence France Presse, Alain Guiraudie explained the (purportedly) graphic sex scenes in Stranger by the Lake as a cinematic union of romantic love and sex. “I wanted to mix the two,” said Guiraudie. “I wasn’t looking to have beautiful love scenes interrupted by pornographic vignettes. I wanted to mix all that, so that it all goes together, that the sex be beautiful.”

That in 2013 people are still (or pretend to be) shocked by graphic on-screen sex, whether gay or hetero or both, says a lot more about early 21st century prudishness and emotional retardation than about either Stranger by the Lake or Abdellatif Kechiche’s potential Palme d’Or winner Blue Is the Warmest Color / La vie d’Adèle, starring Léa Seydoux and Adèle Exarchopoulos. Kechiche’s latest effort offers what has been described – possibly by someone with no access to a computer, on-demand programming, or a DVD store – as “the most explosively graphic lesbian sex in recent memory.”

Something else that’s positive about Stranger by the Lake: whatever its sociopolitical intentions, if any, Alain Guiraudie’s film shows that, for better or for worse, there’s much more in gay men’s minds and lives than the desire of becoming accepted into mainstream society’s traditional institutions.

Now, I should add that gay marriage became law in France just this past week. A few days later, Christian far-right figure Dominique Venner, formerly a member of the nationalist terrorist group OAS, shot himself dead in protest at Paris’ Notre Dame cathedral. Organized by France’s far-right Christians, an anti-gay marriage march is in the works.

‘Stranger by the Lake’ cast

Besides Pierre de Ladonchamps (TV’s L’amour en jeu; The Rebel, Louise Michel) as the man in lust and Christophe Paou (The Chef, Happy End) as the dangerous object of his desire, Stranger by the Lake features Patrick d’Assumçao, Jérôme Chappatte, Mathieu Vervisch, Gilbert Traina, Emmanuel Daumas, Sébastien Badachaoui, and Gilles Guérin. Sylvie Pialat, the late filmmaker Maurice Pialat’s companion and, with him, co-screenwriter of 1987 Palme d’Or winner Under the Sun of Satan, produced Stranger by the Lake through Les Films du Worso.

Besides Blue Is the Warmest Color, another gay-themed film bypassed by the 2013 Queer Palm jury was Steven Soderbergh’s high-profile Behind the Candelabra, starring Michael Douglas as Liberace and Matt Damon as his lover-chauffeur Scott Thorson.

The 2013 Cannes Film Festival’s Palme d’Or and other official awards will be announced at the closing ceremony tomorrow.

Jerry Lewis and Charles Chaplin both made comedies. What else do they have in common? One possible answer: Claire Bloom, Chaplin’s Limelight “discovery” (Bloom had already been featured in the 1948 British drama The Blind Goddess) and Lewis’ leading lady in Max Rose. (Image: Jerry Lewis in Max Rose.)

Jerry Lewis’ first movie since Funny Bones (1995), Max Rose was screened yesterday at the 2013 Cannes Film Festival. Written and directed by Daniel Noah, whose previous directorial effort was the little-seen 2001 thriller Twelve, Max Rose stars the 87-year-old Lewis in the title role: a former jazz pianist who, following the death of his wife (Claire Bloom), discovers that his marriage may have been less than ideally monogamous.

At the 2013 Cannes press conference, Jerry Lewis called Max Rose the “best script I read in 40 years,” explaining that it’s “marvelous” because “it’s about elderly people who’ve been thrown away.”

Lewis also joked that Daniel Noah was the best director he has worked with in fifty years. So much for The King of Comedy‘s Martin Scorsese.

Anyhow, Variety reviewer Rob Nelson was unimpressed with Max Rose, deriding it as “a sappy sudser in which every stage of grief overstays its welcome. … Only the most undiscriminating senior audiences – or the most irrationally charitable of Lewis fans – will find much to appreciate in a would-be weepie that runs under 90 minutes but feels twice as long.”

Equally unimpressed was Hey You Guys‘ Craig Skinner, writing: “As the titular Max Rose Lewis is reasonably adequate, playing the thinly written character with a hint of melancholy and a lot of curmudgeonly behavior … .” Overall, however, Max Rose marks “a disastrous return to the screen for Lewis … but one which received a lengthy standing ovation at the Cannes Film Festival. Despite the fact that a number of those clapping had quite obviously dozed off during the film.”

Apparently, more interesting than watching Jerry Lewis in Max Rose was watching – and listening to – him at Cannes’ Max Rose press conference. Shortly after Lewis’ arrival, Skinner recounts, festival director Thierry Fremaux asked the veteran Hollywood star if there was anything he wanted to say about Max Rose. As a response, Lewis yelled: “No! I got here at 10 after 1, you putz!” Unfortunately, Fremaux’s reaction went unrecorded.

Regarding woman comedians, Lewis, who grew up at a time when Irene Dunne, Carole Lombard, Jean Arthur, Rosalind Russell, and Claudette Colbert were starring in various sorts of movie comedies, expounded: “I can’t see women doing that. It bothers me. I cannot sit and watch a lady diminish her qualities to the lowest common denominator. I just can’t do that.” Additionally, he remarked that his favorite “female comedian” is Cary Grant. (Note: In French, this was translated as Lewis’ “favorite actress [comedienne].”) Luckily, it seems that no one bothered to ask Lewis questions about gays or his falling out with the Muscular Dystrophy Association.

At least Jerry Lewis gets some points for his reply to a silly question about “the difference” between American humor and (monolithic?) European humor: “No difference. American humor is no different from other humor. Humor is humor.”

And he had kind things to say about working with Claire Bloom. More points for him.

So far, no release dates have been announced for Max Rose.

Mike Lerner and Maxim Pozdorovkin’s Pussy Riot – A Punk Prayer follows the Pussy Riot trial in which three of the band’s members stood accused of “hooliganism motivated by religious hatred” following a performance staged at Moscow’s Cathedral of Christ the Savior – the group attacked the link between the leaders of Russia’s Orthodox Church and Vladimir Putin’s de facto dictatorship – which evolved into the protest music video “Punk Prayer – Mother of God, Chase Putin Away!”

According to the Sheffield Doc/Fest 2013 notes, Lerner and Pozdorovkin obtained “astonishing access to the legal system, including the courtroom, where the girls murmur from within the confines of a glass cage at the sometimes farcical mayhem around them.” Pussy Riot – A Punk Prayer is described as “a truly compelling immersion into the clash between a generation determined to challenge an oppressive status quo, with those who are equally determined to maintain it.” Needless to say, you don’t have to live in Vladimir Putin’s Russia to relate to Pussy Riot’s plight.

Musical director Jarvis Cocker and director Martin Wallace’s The Big Melt “takes viewers on a music and film journey using one hundred years of film from the BFI archives into to the soul of a nation [that’s the UK], bringing to life the ghosts of our past, taking us into the belly of our industrial heritage.” According to the Sheffield Doc/Fest website, after watching (and listening to) The Big Melt, “you will never look at a fork in the same way again.”

Lucy Walker’s The Crash Reel tells the story of U.S. snowboarder Kevin Pearce’s recovery following a near fatal sporting accident; Toby Amies’ The Man Whose Mind Exploded documents the life of Brighton resident Drako Zarhazar, who suffers from a disorder that prevents him from creating new memories; and Robert Stone’s Pandora’s Promise raises the issue that nuclear power may be Planet Earth’s salvation.

That was cold blooded. Often critics write for style not for compassion or arts appreciation. This is JERRY LEWIS for gawd’s sake! Thats like dissing one of James Brown’s last concerts!

As a fan of Jerry Lewis and his 1960’s films, which the writer of this article so causally disregarded as having no merit, I don’t believe this is a fair review of his new film. Jerry has suffered many health problems and he is 87 years old. He has always spoke his mind and many of the sarcastic comments he has made have been taken too seriously. I think an unbiased review of the film - not A review of Jerry, would of been more appropriate. I will see “Max Rose” and decide for myself.

Jerry caught himself right after he used the f word and apologized later, too.
He’s old school about gender but made movies with Helen Traubel. The crowd
laughed when he called the festival director a putz as brash humor, nothing
serious. Jerry gets some strong reactions one way or another, but the ones
who are obsessively negative seem to take such moments too seriously. For a
more sympathetic review, see the rogerebert web site.