Heller in Pink Tights is the seventh film in the guild’s monthly series that pays homage to the work of Art Directors Guild masters. Gene Allen will be present for a Q&A following the screening, discussing both the film and his career, which includes work on films such as A Star Is Born (1954), Bhowani Junction (1956), Les Girls (1957), Let’s Make Love (1960), the aborted Something’s Got to Give (1962), My Fair Lady (1964), and The Cheyenne Social Club (1970). All of the aforementioned titles were George Cukor films, except for the last one, which was directed by Gene Kelly (the star of Les Girls).

Gene Allen won an Academy Award for My Fair Lady, and was nominated for both A Star is Born and Les Girls. He also worked for directors John Farrow (Back from Eternity), Michael Kidd (Merry Andrew), and Peter Bogdanovich (At Long Last Love). He was head of the Art Directors Guild for many years, and at one point served as president of the Academy of Motion Picture Arts and Sciences.

Produced by Italians Carlo Ponti and Marcello Girosi, Heller in Pink Tights is a curious Western. There are few John Ford-esque vistas and little bang-bang action. Instead, Cukor and screenwriters Walter Bernstein (who had been blacklisted in the 1950s) and Dudley Nichols (who died of cancer that same year), adapted Louis L’Amour’s novel Heller with a Gun, while focusing on what happens indoors. (The adaptation also used bits from 19th-century stage performer Joseph Jefferson’s life story and from a similarly themed 1940 treatment written by D.W. Griffith.) 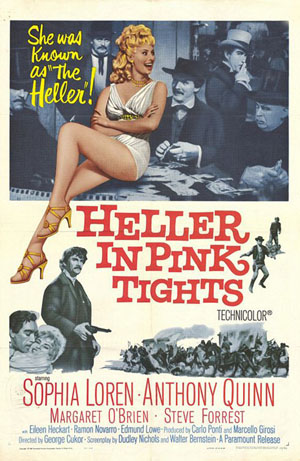 In the film version, Sophia Loren (producer Ponti’s other half) plays an Italian stage diva whose theatrical troupe travels through the Old West so as to both stage lavish shows and run away from creditors. Fellow troupers include Anthony Quinn (instead of Cukor’s original choice, Roger Moore), Steve Forrest, Eileen Heckart, former child star Margaret O’Brien, and silent-screen veteran Edmund Lowe.

Here’s Walter Bernstein, as quoted in Patrick McGilligan’s A Double Life: George Cukor (the source for much of the information found in this piece):

“It was not [Cukor’s] kind of movie, really, a Western. He was much more involved with [“color coordinator”] George Hoyningen-Huene and Gene Allen, and the style of the picture really. I was just entranced by that trio of Cukor, Huene, and Allen – Huene was very elegant; Gene Allen was an ex-L.A. cop of a considerably developed aesthetic sensibility. Looks like a cop, talks like a cop, but Cukor was able to see what he had and he was very, very valuable. Allen did all the camera setups; he walked through them and laid them out.

“Cukor was very smart that way. He didn’t have an ego in that sense. He used whatever he could in a situation.”

Gene Allen’s blazing-red sets alone are worth a trip to the Aero. As a plus, Harold Lipstein’s color cinematography fully captures the gaudiness of the vaudeville environment, Steve Forrest looks incredible (and is surprisingly effective as a cocky heartbreaker), while Ramon Novarro, playing a powerful crook, delivers the best performance of his career’s character-actor phase.

The Adventures of Tom Sawyer (1938), an early Technicolor effort, will be screened in September at the Egyptian Theater, while the final film in this year’s series will be the Disney studio’s little-seen visual-effects filled Darby O’Gill and the Little People (1959), to be shown at the Aero in October.

I just want to say, ‘Happy Birthday!’ From someone who was in the biz as a set dresser and leadman from the 70s to the 90s…thank you for your great work! A Star is Born!! My Fair Lady!! They don’t get any Better or More Important than That!

(My grandfather, Jesse E Littlejohn, was also an L.A. cop, and a member of ‘The Hat Squad’ along with Gene Roddenberry!)

I WAS A COP (POLICE OFFICER) FOR 6 MONTHS. IVE BEEN AN ARTIST FOR MOST OF MY 93 YEARS.
LET ME ADD THAT GEORGE CUKOR WAS A PREMIER MOVIE DIRECTOR.
GENE ALLEN
NEWPORT BEACH. CA.