Starring Gene Tierney, Dana Andrews, and Clifton Webb, Otto Preminger’s classic 1944 film noir Laura, one of the best in the genre, will be screened as the next feature in the Academy of Motion Picture Arts and Sciences’ series “Oscar Noir: 1940s Writing Nominees from Hollywood’s Dark Side” on Monday, May 24, at 7:30 p.m. at the Academy’s Samuel Goldwyn Theater in Beverly Hills.

Laura will be introduced by Oscar-nominated screenwriter Scott Frank (Out of Sight, Minority Report).

At 7 p.m. the noir cartoon short Flora (1948) and the episode “The Guillotine” from the 1941 serial Adventures of Captain Marvel will be screened as part of the evening’s pre-feature program.

“Oscar Noir” is a summer-long series featuring 15 film noir classics from the 1940s, all of which were nominated in writing categories. Including Laura, there are 13 screenings remaining in the series. (Right: Vincent Price and Gene Tierney.)

June 2 updat: Cara Williams, a Best Supporting Actress Oscar nominee for Stanley Kramer’s The Defiant Ones (1958), which starred Sidney Poitier and Tony Curtis, is seen in the picture above.

Laura was shown as the part of the Academy of Motion Picture Arts and Sciences’ “Oscar Noir” series at the Academy’s Samuel Goldwyn Theater in Beverly Hills on Monday, May 24, 2010.

Powell was an MGM star in ’40s and ’50s, and is best remembered for the musicals Royal Wedding (1951) and Seven Brides for Seven Brothers (1954); and Talmadge was one of the biggest stars of the silent era, starring in both dramas and comedies, such as Within the Law (1921) and Kiki (1926).

The recent acquisitions are:

The library holdings also include more than 1,000 special collections representing a wide range of moviemaking personalities. The Herrick is open to the public four days a week; it is a non-circulating research facility housed in what was once a water treatment facility in Beverly Hills. 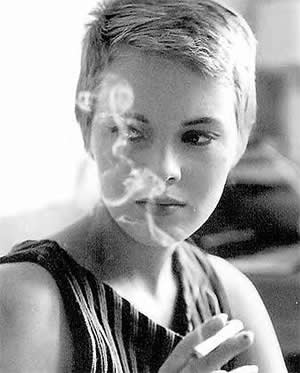 Jean Seberg’s association with Jean-Luc Godard’s A bout de souffle / Breathless (1960) was the key subject of a q&a that took place in 1968. Veteran Hollywood publicist Harry Clein was the interviewer.

At the time, Seberg, who became an international star following the release of Breathless, was working on Joshua Logan’s expensive musical flop Paint Your Wagon (1969), opposite Clint Eastwood and Lee Marvin.

Seberg had been discovered by veteran filmmaker Otto Preminger in 1957, as Preminger, the director of Laura (1944) and the groundbreaking (now inoffensive) sex comedy The Moon Is Blue (1953), was then casting the lead role in Saint Joan. But despite all the publicity surrounding Preminger’s project, this film version of Joan of Arc’s life (based on George Bernard Shaw’s play) flopped badly, and Seberg herself received unkind notices.

Even so, Preminger used the 21-year-old actress once again in Bonjour Tristesse (1958), in my view a first-rate (though generally dismissed) adaptation of Françoise Sagan’s novel, co-starring Deborah Kerr and David Niven. (True, you have to either pretend those English speakers are French or – and that’s what I did – pretend they’re British citizens, one of whom with an American daughter, who, for whatever reason, all have French monikers.)

Bonjour Tristesse was distributed by Columbia, the studio that inherited Seberg’s personal contract with Preminger. (United Artists had handled the distribution of Saint Joan.)

The Jean Seberg-Harry Clein interview has been posted on Anne Thompson’s indieWIRE blog Thompson on Hollywood. Below is a snippet. Note: When Seberg talks about Columbia’s “great foresight,” she’s being sarcastic, as Breathless was a worldwide sensation.

Harry Clein: Breathless put you at the center of the French New Wave.  Were you surprised?

Jean Seberg: I was out of work and needed the money.  The producer asked Columbia, which then owned my old Preminger contract, if I was available.  He gave Columbia a choice of $12,000 or 50 percent of the world profits.  With great foresight, Columbia took the $12,000. It was shot for $76,000 in five weeks.  Most of the time we worked half days.  We’d break and sit around in cafes.  One day the producer saw us, it was his last card, and he got into a fistfight with Godard because we weren’t working.

Directed by Jean-Luc Godard, whose Film Socialisme left some reviewers scratching their heads at the 2010 Cannes Film Festival, and starring Jean-Paul Belmondo and Jean Seberg, A bout de souffle / Breathless grossed $32.7,000 at four theaters in the United States, according to Box Office Mojo.

The French New Wave classic that has influenced filmmakers around the world is turning 50. Even so, there are some who find Breathless fresher than much of the stuff being churned out today.

“Its young and restless protagonists, Belmondo’s Michel Poiccard and Seberg’s Patricia Franchini, were created to live for and be alive in the moment on screen,” writes Kenneth Turan in the Los Angeles Times, “to give us a sense that what we were watching was unpredictably happening right in front of us, and that is still very much the feeling Breathless creates.”

Godard is still making movies. Belmondo, though in frail health, is still around. Seberg, who had been discovered by Otto Preminger three years before Breathless, was found dead in her car in Paris in 1979, a “probable suicide,” according to police. She was 41.

This is a splendid “little movie”. Low budget, low key, low on pretty much all else… it nevertheless grabs your attention from the get go and manages to keep tugging at your heart and raw emotions until the very end.
Its greatest asset is its simple, down-to-earth honesty. Although the plot may strike one as far-fetched and somewhat convoluted, it is in fact very realistic, and more than plausible!
Anyone who knows at least one Serbian immigrant in New York will have no trouble relating to its story.
Highly recommended!