The Genie Awards 2008 ceremony, held last night in Toronto, was dominated by Sarah Polley’s remarkably accomplished directorial debut, Away from Her, which won a total of 7 awards.

The story of a man coming to terms with the fact that his Alzheimer’s-stricken wife has fallen in love with another patient at her mental hospital won Genies for best film, best director, best adapted screenplay (Polley, from Alice Munro’s short story “The Bear Came Over the Mountain”), best actor (Gordon Pinsent, who has been unfairly ignored south of the border), best actress (Julie Christie), best supporting actress (Kristen Thomson), and the Claude Jutra Award for best first film. (Away from Her lost only the best editing award.)

As quoted in the Toronto Globe and Mail, Julie Christie, via satellite feed, thanked Polley for her tenacity. “I would like to give an award to Canada for producing Sarah Polley. Not only is she a wonderful actor, a wonderful director, and a wonderful screenplay writer, she is also the most persistent person I have ever met. And I am so grateful to her. That she persisted in persuading me to make Away from Her one of the happiest, if not happiest, film experiences of my life.”

Roger Spottiswoode’s Shake Hands with the Devil, a real-life inspired drama set in Rwanda during the genocide, and starring Roy Dupuis as General Roméo Dallaire, went into the ceremony with 12 nominations but received only one award, for best original song (“Kaya” by Valanga Khoza and David Hirschfelder).

Bruce McDonald’s The Tracey Fragments, starring Ellen Page as a(nother) troubled teenager, failed to win in any of its six nominated categories.

On the political front, the evening’s host, Sandra Oh, took a swipe at Bill C-10, which members of Canada’s current right-wing government, eager to impose censorship on Canadian film and television productions, want to have passed.

“I feel I can’t go on without bringing up Bill C-10,” Oh remarked. “[If passed], a very small group of government bureaucrats [will have the] the power to censor Canadian film and television artists by threatening to take away vital government funding. So in other words, censorship has had a little work done, and is trying to make a comeback. I don’t know about you, but that doesn’t sound Canadian to me.”

For his part, Eastern Promises’ executive producer Robert Lantos, upon accepting the Genie for best original screenplay, remarked that “this screenplay is chock full of powerful, frank, honest, original scenes. Just the kind that, if some barbarians have their way, are no longer going to be permissible in Canadian cinema.”

(In February, David Cronenberg told CBC News, “It sounds like something they do in Beijing.” Or, whenever they can, in Washington. See the Federal Communications Commission’s sexual-and-excretory-organ freaks’ ruling on a bare butt shown on NYPD Blue.)

As for the perceived snub of Jason Reitman’s box office hit Juno, Sara Morton, head of the Academy of Canadian Cinema and Television, said in a statement that “regrettably, the filmmakers decided not to enter the film into the Genie Awards. Ultimately, it’s up to the filmmaker to decide whether to seek Canadian certification. It would not be appropriate for me to speculate about the reasons for a filmmaker’s decision or why they may or may not qualify.”

Before the Oscars, Reitman had complained that his film had been unfairly deemed ineligible by the Canadian Academy: “It’s a Canadian director, Canadian stars, Canadian cast, Canadian crew, shot in Canada – how are we not eligible for a Genie when David Cronenberg’s film about Russians living in London shot in England with a British crew and British cast is eligible? I’m sorry, but somebody is going to have to explain that to me; I don’t get it.”

Now, it should be noted that Juno was financed by an American company. Part of the financing for Eastern Promises came from Canadian sources. I’m not sure if that means that Juno would have been deemed ineligible even if Reitman had submitted it for certification.

And the last word goes to Sarah Polley:

“[Away from Her] would never have been made without public support through organizations like Telefilm Canada and the Ontario Media Development Corp.

“I feel extremely lucky to have had the rare experience, as a first-time filmmaker, of being able to find my own voice without constant pandering to a profit motive or to committees. I think that is what is special about making a film with public money. And I’m very grateful for it. We can never, ever stop fighting for it.”

DO NO WATCH this clip found on YouTube. It shows a woman’s bare buttocks (more specifically, Charlotte Ross’), a sight that has been proven to cause wars, famine, pestilence, assorted natural disasters, and governmental authoritarianism.

CLAUDE JUTRA AWARD FOR BEST FIRST FILM: Away from Her

GOLDEN REEL AWARD FOR MOST SUCCESSFUL FILM: The 3 Little Pigs

Directed by first-timer Patrick Huard and written by Claude Lalonde and Pierre Lamothe, Les 3 p’tits cochons / The Three Lil’ Pigs became last year’s biggest box office hit in Quebec. Inspired by the old fable, this comedy of sexual and social mores stars Paul Doucet, Claude Legault, and (the frequently semi-naked) Guillaume Lemay-Thivierge as three brothers who get together periodically by the bed of their comatose mother, while also finding themselves enmeshed in assorted sexual adventures online, at the office, and elsewhere. Unlike the fable, however, the film’s message, as per Sept7, is that “All guys are pigs (and many girls, too), but that’s ok.” In addition to its 13 Jutra nominations, The Three Lil’ Pigs garnered 4 Genie nods from the Canadian Academy (screenplay, editing, actor for Claude Legault, supporting actor for Guillaume Lemay-Thivierge). Addendum: Ultimately, The Three Lil’ Pigs failed to win a single competitive Jutra. Its only win was the Billet d’Or prize given to the most financially successful Quebecois film of the year.

Billet d’or for the most popular film in Quebec: The Three Lil’ Pigs

Produced, directed, written, and edited by Jake Mahaffy, SXSW 2008 jury winner Wellness follows a salesman (Jeff Clark) whose yearning for financial and professional success gets him all tangled up in a scheme to sell an “embargoed” health product called “Wellness.” Tragedy and comedy ensue.

Special Jury Award – I hate you don’t touch me or Bat and Hat Director: Becky James 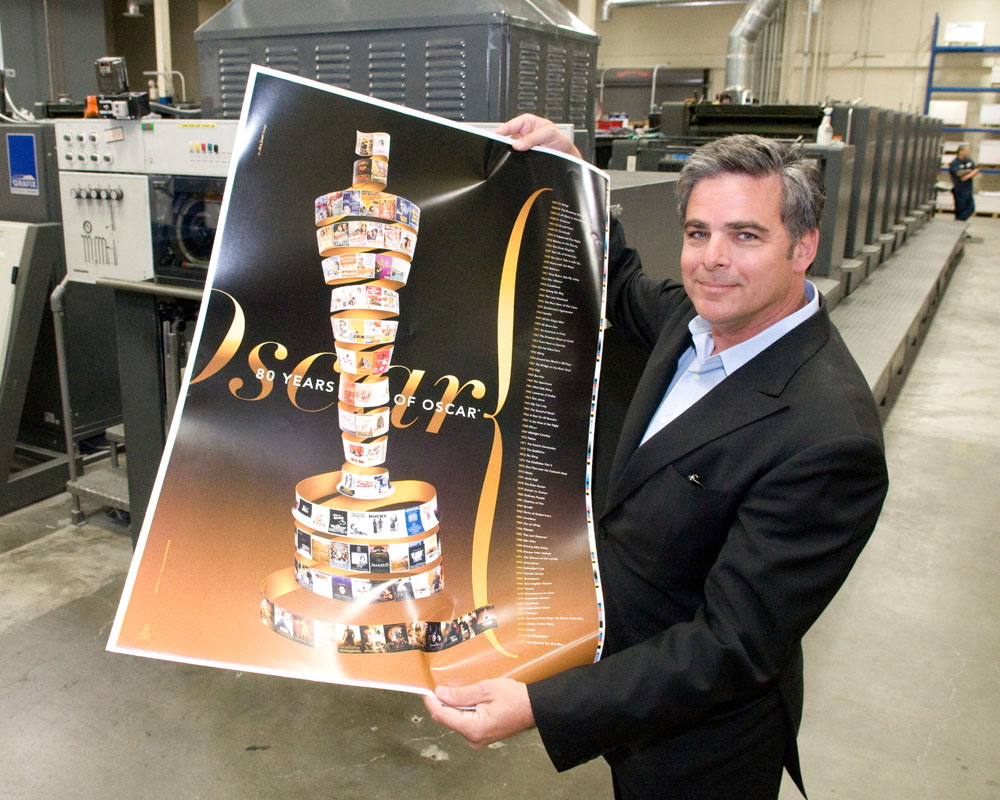 Graphic artist Alex Swart, head of SwartAd, poses with the fresh-off-the-presses poster he designed commemorating the 80th anniversary of the Academy Awards. The 80th anniversary poster features a spiraling gold ribbon containing the one-sheets for all the Best Picture winners, forming the shape of the Oscar statuette.

What Are the BAFTA Awards? Hollywood-on-the-Thames + David A. Grafton...