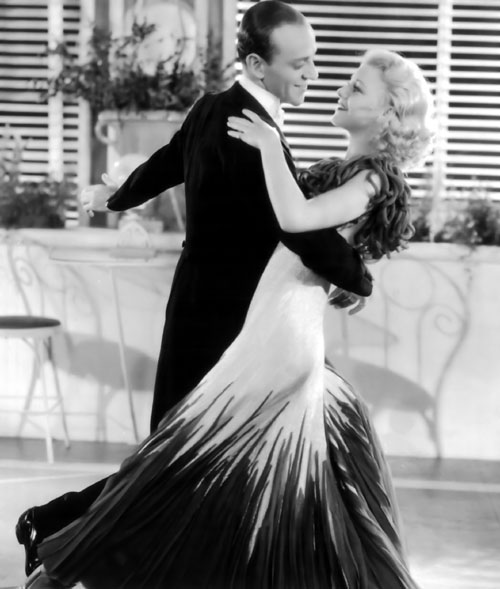 Ginger Rogers is Turner Classic Movies’ Star of the Month of March. Most of the films – perhaps all of them – have been shown on TCM before. So, don’t expect hard-to-find titles such as The Confession, Forever Female, The Groom Wore Spurs, Young Man of Manhattan, Sitting Pretty (1933), A Shriek in the Night, or Harlow (the Carol Lynley version).

TCM’s Ginger Rogers salute begins tonight at 5 p.m. Pacific Time with a screening of The Gay Divorcee (above), one of Rogers’ best pairings with Fred Astaire, partly thanks to a top-notch supporting cast that includes Alice Brady, Eric Blore, and Erik Rhodes. That will be followed by the other nine Rogers-Astaire (I know it’s usually the other way around) films, all but one made at RKO. The one exception was the latter-day The Barkleys of Broadway, made at MGM in 1949 – following a ten-year hiatus – and notable as their only color film together.

Strangely, I haven’t watched The Barkleys of Broadway, yet, but I’ve seen all of the Rogers-Astaire RKO musicals. In addition to The Gay Divorcee, I’d heartily recommend Follow the Fleet, generally considered a lesser effort but it’s my own personal favorite. Directed by Mark Sandrich, Follow the Fleet has great songs, sparkling dialogue, and good acting all around. Even Fred Astaire, whom I’ve never found very enjoyable when not dancing, is quite good in this, and so is Harriet Hilliard, who would later become a household name because of The Ozzie and Harriet Show. As a plus, Betty Grable can be spotted in a bit part.

The most renowned Rogers-Astaire vehicle is Swing Time, perhaps because it was directed by a heavyweight, in this case future two-time Academy Award winner George Stevens. Can’t say I’m too crazy about it, but it’s certainly eons better than Shall We Dance?, released the following year and a near carbon copy of Swing Time.

No wonder the Rogers-Astaire partnership ended after two more movies. RKO exploited them as much as possible without bothering to give their top stars top-quality material. Carefree isn’t bad, but The Story of Vernon and Irene Castle – a departure from their fluffy vehicles – is all but unwatchable. Except that Ginger Rogers and Fred Astaire are in it, which paradoxically makes the backstage musical a must-see.

Flying Down to Rio may elicit laughs whenever Mexican Dolores del Rio struggles to pass for a Portuguese-speaking Brazilian. But the biggest laugh will likely explode when del Rio says that “bribery in Brazil is a major crime.” Viewers will also be rolling in their living-room/bedroom floor during the climactic aerial dance number, especially when one of the dancing girls falls off a plane only to safely land on the wing of another.

5:00am Carefree (1938)
A psychiatrist falls in love with the woman he’s supposed to be nudging into marriage with someone else.
Cast: Fred Astaire, Ginger Rogers, Ralph Bellamy, Luella Gear Dir: Mark Sandrich BW-83 mins

Top Box Office Movies: Women to the Sidelines (Except Bullock)