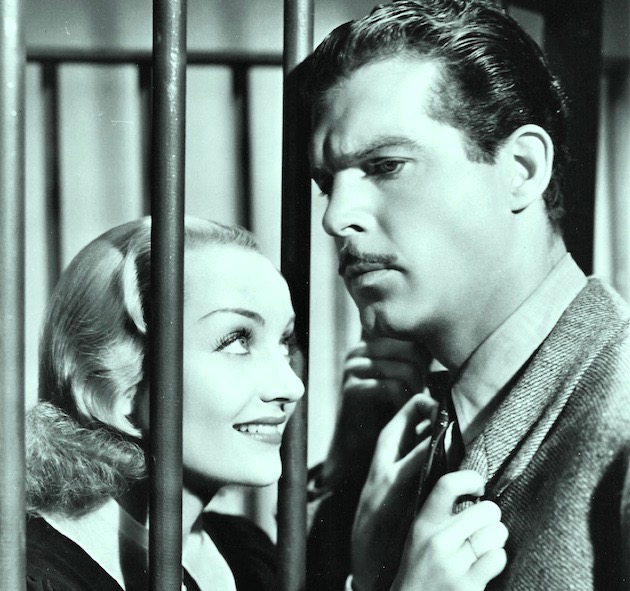 A trio of glamorous actresses and the man known as the personification of grandiose Old Hollywood filmmaking are getting the DVD box set treatment, courtesy of the usually neglectful Universal Pictures Home Entertainment.

The three “glamorous actresses” sets will be released on April 4. The DeMille set comes out on May 23. More details below.

The Carole Lombard DVD box set includes six titles from the 1930s: Man of the World (1931), We’re Not Dressing (1934), Hands Across the Table (1935), The Princess Comes Across (1936), the Universal release Love Before Breakfast (1936), and True Confession (1937). Every one of them is worth a look, even if only for one reason: Carole Lombard herself, never one of the most glamorous actresses around, but definitely one of the brightest – and highest-paid – stars of the second half of the 1930s.

In movies since age 13 (A Perfect Crime, 1921), Lombard slowly progressed from bits and small parts to minor leading lady roles at the dawn of the sound era, when she was made up to look like RKO star Constance Bennett’s twin.

One such minor lead was as a young American who, while on a visit to Paris, becomes romantically entangled with no-good faux novelist – and Lombard’s off-screen husband-to-be – William Powell in Richard Wallace’s (until spring 2006) hard-to-find drama Man of the World.

Despite its stellar cast (see below), Norman Taurog’s 1934 musical comedy We’re Not Dressing, based on J.M. Barrie’s class-conscious stage comedy The Admirable Crichton, is about as little known and as hard to find as Man of the World.

Mitchell Leisen’s Hands Across the Table and Walter Lang’s Love Before Breakfast are both formulaic, forgettable romantic comedies, of interest only because of Carole Lombard’s presence. Not much better is Wesley Ruggles’ intermittently amusing True Confession, in which Lombard plays – a tad too cutesily – a pathological liar who takes the expression “tongue in cheek” a tad too literally. 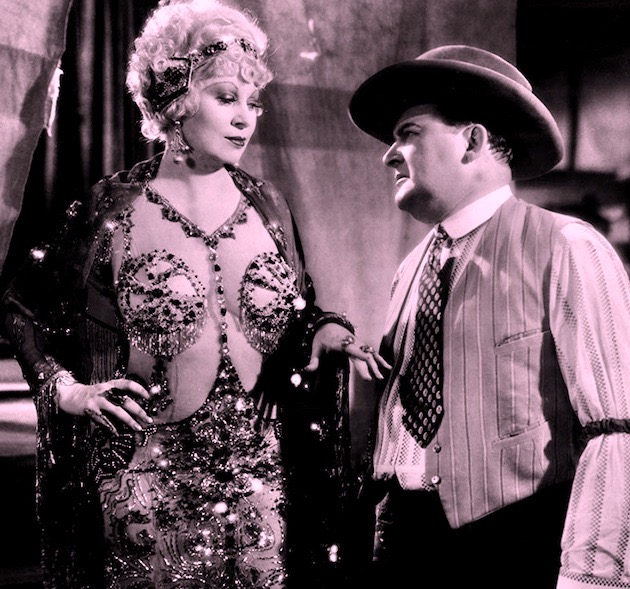 “Glamorous actresses”: Mae West and Edward Arnold in I’m No Angel. Neither Mae West nor Edward Arnold could ever be found on the list of members of the Glamorous Actresses & Actors club; even so, both were popular film players during the 1930s. West, in particular, was so big that two of her – racy – 1933 star vehicles, Lowell Sherman’s She Done Him Wrong and Wesley Ruggles’ I’m No Angel, helped to rescue Paramount from receivership. Her Hollywood career is supposed to have been derailed by the Production Code, which, from mid-1934 onward, neutered her risqué humor and to-hell-with-moralists sexuality.

Like Carole Lombard, Mae West wasn’t known as one of cinema’s most glamorous actresses. Even so, like fellow early 1930s Paramount superstar Marlene Dietrich, West was known as a sex symbol, one whose taste in clothes (see above) was an intrinsic part of her screen persona, and one whose lines – and line delivery – contributed to the ratification of the Production Code in mid-1934, which in turn likely contributed to the demise of her Hollywood stardom.

The Pre-Code Mae West can be seen at her best in what is probably her wittiest star vehicle, Wesley Ruggles’ I’m No Angel (1933), one of the five movies in The Mae West Glamour Collection.

In the subversive sex comedy, co-screenwriter West plays a philosophizing carnival performer who makes sure we understand that “it’s not the men in your life that counts, it’s the life in your men.” On a more personal level, she seduces rich dude Cary Grant after making sure he understands that “When I’m good, I’m very good. But, when I’m bad … I’m better.”

In the unfairly neglected Archie Mayo’s Night After Night (1932), bad girl West and good girl Alison Skipworth are both fantastic; the former as an entrepreneur who understands that “goodness” will not get you very far, the latter as speakeasy owner George Raft’s etiquette tutor who loses all sense of decorum after getting all boozed up.

Alas, Mae West makes an odd but not very entertaining couple with W.C. Fields in Universal Pictures’ Edward F. Cline-directed comedy Western My Little Chickadee (1940). Alison Skipworth would have been a much better match. 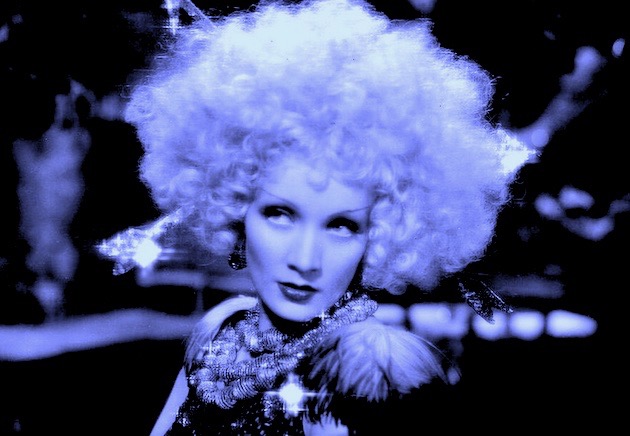 “Glamourous Actresses”: Marlene Dietrich in Blonde Venus. Thanks to her association with filmmaker/reported lover Josef von Sternberg and to Paramount’s decision to come up with their own version of MGM’s Greta Garbo, Marlene Dietrich was directed and photographed so she would come across as the embodiment of cinematic glamour. She and von Sternberg collaborated on a total of seven films – The Blue Angel (1930), Morocco (1930), Dishonored (1931), Shanghai Express (1932), Blonde Venus (1932), The Scarlet Empress (1934), and The Devil Is a Woman (1935) – three of which are found in Universal’s “glamorous actresses” DVD box set series.

Whether or not you buy into the “They don’t make ’em like they use to” maxim, they sure as hell no longer make “glamorous actresses” like Marlene Dietrich.

Whether or not that’s such a bad thing depends on your take on movie stars whose screen persona is to a large extent defined by how they look in evening gowns, top hat and tails, ostrich feathers, and gorilla suits.

Admittedly, Dietrich was quite a bit more than an exotic clotheshorse. A leading lady in German silents of the late 1920s (I Kiss Your Hand Madame, The Ship of Lost Men), she became an international star after seducing and abandoning middle-aged schoolteacher Emil Jannings in Josef von Sternberg’s 1930 tragicomedy The Blue Angel.

The Marlene Dietrich Glamour Collection doesn’t include this particular German-made, Paramount-distributed classic, but it does feature (hopefully good prints of) three other Dietrich-von Sternberg collaborations: Morocco (1930), Blonde Venus (1932), and The Devil Is a Woman (1935); in addition to René Clair’s The Flame of New Orleans (1941) and Mitchell Leisen’s Golden Earrings (1947).

The epoch-making but now creaky Pre-Code drama Morocco was Dietrich’s Hollywood debut, earning her a Best Actress Academy Award nomination for looking androgynously alluring in top hat and tails, for kissing another woman in the lips, and for, pissing off feminists, running barefoot after Legionnaire Gary Cooper.

Blonde Venus stars the glam queen as a cabaret performer/devoted mom/reluctant adulteress who dons some pretty unusual costumes and wigs – including a blond Afro and a gorilla suit – in the memorable “Hot Voodoo” number.

Lastly, the box office flop The Devil Is a Woman put an end to Dietrich’s professional association with von Sternberg.

Not helped by the casting of Bruce Cabot (King Kong) as Dietrich’s leading man, René Clair’s lethargic, uninvolving The Flame of New Orleans – a Universal Pictures release – is probably one of the director’s weakest films.

Mitchell Leisen’s Golden Earrings stars Dietrich as a Central European gypsy who helps British national Ray Milland to flee the Nazis by dressing him up in gypsy clothes and having his ears pierced. 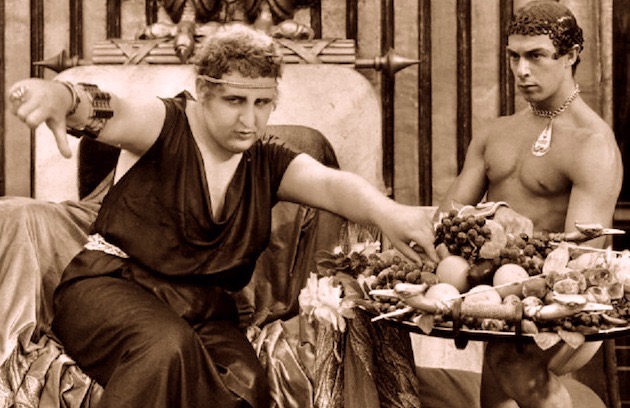 Featuring the lovely Elissa Landi as a Christian heroine and an uncomfortable Fredric March as the Christian-convert hero, The Sign of the Cross is at its best when its focus is on pagan perdition: Claudette Colbert, not long before becoming the embodiment of glamorous American womanhood, is excellent as Ancient Rome’s man-hungry, asses-milk-bathing Empress Poppaea, while Charles Laughton, not long before becoming an international star by way of The Private Life of Henry VIII (1933), is equally effective as a fey, gay Nero.

Starring Claudette Colbert in the title role, the Academy Award-nominated Cleopatra is a campy curiosity, while The Crusades and Union Pacific every so often offer dramatic and historical points of interest. Besides, the casting of Loretta Young in the former and Barbara Stanwyck in the latter is a definite plus.

A mix of adventure and psychological drama, Four Frightened People has the absurdist, over-the-top feel of a B movie from 1922, but with audible dialogue, an “A” budget, and top talent. It’s surely Cecil B. DeMille’s weirdest talkie and likely Claudette Colbert’s weirdest movie altogether. That in itself makes Four Frightened People a must-see. Hopefully, the DVD will feature UCLA’s first-rate restoration of the film.

Check out: “The Most Important ‘Religion Films’ of All Time.”

For the most part, Universal’s classic-movie DVDs come out with few, if any, extras. Yet the “glamorous actresses” and the DeMille box sets are most welcome, as they allow us to check out historically significant films that otherwise would have remained gathering dust – along with hundreds of other titles – inside some Universal vault.

Equally of interest would be the numerous Paramount-produced Claudette Colbert star vehicles of the 1930s and 1940s that have yet to be released on DVD, among them Secrets of a Secretary, The Wiser Sex, The Phantom President, Private Worlds, Tovarich, Zaza, Skylark, and Practically Yours.

Some of (most of? all of?) the titles listed above have never been released on home video either.

August 2018 update: Apart from low-quality bootlegs, most of the movies listed above remain as inaccessible today as they were when the “glamorous actresses” & Cecil B. DeMille DVD box sets came out a dozen years ago.

Charles Laughton The Sign of the Cross image: Paramount Pictures.

Thanks for sharing the announcements. I just watched and reviewed DeMille’s Four Frightened People, but am looking forward to a superior print.