Two-time Best Actress Academy Award winner Glenda Jackson set aside her acting career after becoming a Labour Party MP in 1992. Four years ago, Jackson, who represented the Greater London constituency of Hampstead and Highgate, announced that she would stand down the 2015 general election – which, somewhat controversially, was won by right-wing prime minister David Cameron’s Conservative party.[1] The silver lining: following a two-decade-plus break, Glenda Jackson is returning to acting.

Now, Jackson isn’t – for the time being – returning to acting in front of the camera. The 79-year-old is to be featured in the Radio 4 series Emile Zola: Blood, Sex and Money, described on their website as a “mash-up” adaptation of 20 Emile Zola novels collectively known as “Les Rougon-Macquart.”[2]

Part 1 of the three-part Radio 4 series will be broadcast daily during an “intensive and addictive week” beginning on Saturday, Nov. 21. The two other week-long installments will follow at six-month intervals.

… [It’s] a multi-stranded immersive experience that draws us into 19th century France and the tragic, farcical reign of Napoleon III, as it marches forward towards a modern, industrialised society. The ride will be pacey, challenging, exciting. Zola’s work shocked our great-great-grandparents and he will shock us again.

Emile Zola is arguably literature’s greatest whistleblower. He tells the truth about the society he sees around him, taking a sharp look at organisations, professions and people in power, regardless of whom he offends and whose interests he crosses. This is an unflinching portrait of society, the frankness and fury of which is still relevant to contemporary Britain.

Indeed, if Emile Zola were around today – whether in France, the U.K., or elsewhere – in all likelihood he’d be either in prison, in hiding, or under the careful watch of government agencies.[3]

The drama takes place inside Fouque’s mind, as she ponders, “What did I bring into this world? Wolves… I have raised a family of Wolves… I have watched their years. I will tell their story. Crime by crime. Blood by blood.” 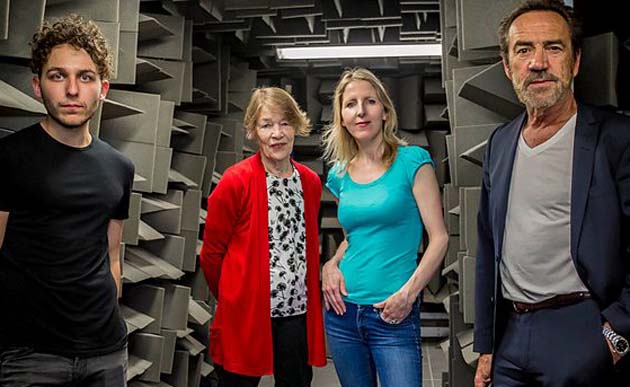 Glenda Jackson and the future

But besides Emile Zola and Radio 4, what else does the future hold for the former Labour MP?

“Will you stop trying to get me to decide what the future holds,” she recently snapped at Ham&High‘s Tim Lamden. “I don’t know! I keep saying to people, ‘I’ll sit down and take a deep breath.’ I haven’t been in a position where I haven’t been working for more than 60 years.”

Even so, a return to either the stage or the screen – or both – remains a possibility. “It would depend on what it was,” she told Lamden. “But I don’t think you can necessarily go back.”

Perhaps as long as the offer doesn’t involve her playing some Meryl Streep admirer in a sequel to The Iron Lady, there’s a chance. After all, regarding her entry into politics, Jackson explained to Lamden, “Anything that I could have done that was legal to get rid of Margaret Thatcher and her government I was prepared to do.”

That was when the then former actress defeated Tory candidate Oliver Letwin – ironically, as Lamden remarks, “now one of David Cameron’s closest allies in government.”

In case you’re wondering, Jackson’s favorite actors are fellow two-time Oscar winner Marlon Brando (On the Waterfront, The Godfather) and one-time Oscar winner Paul Scofield (A Man for All Seasons). The former sent her a note of congratulations at the time she beat Letwin for the Hampstead and Highgate seat.

Back in her day, Glenda Jackson was the sort of actress – whether at her most subtle or at her most ostentatious – who would have made the dinosaurs in Jurassic World, Arnold Schwarzenegger and his fellow weapon-toting Terminator Genisys cast members, and all the superheroes (and supervillains) in The Avengers: Age of Ultron cower in awe.

She won her two Best Actress Academy Awards for the following:

The former was an artistically daring critical – and to some extent commercial (thanks to some man-on-man nude wrestling) – sensation. The latter was a disappointingly bland mainstream effort, and, unsurprisingly, a major box office hit. 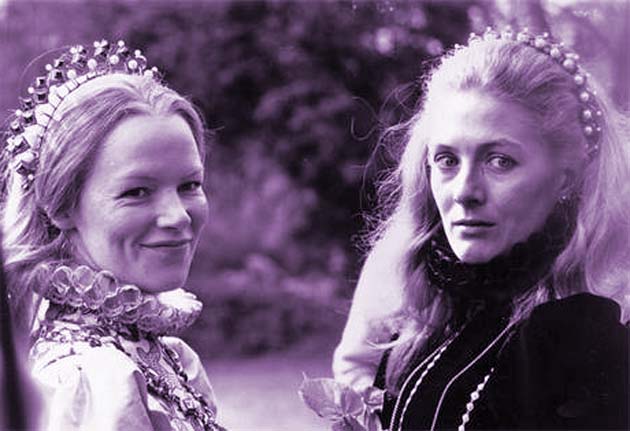 Glenda Jackson in ‘Mary, Queen of Scots,’ with Vanessa Redgrave.

Below are a few other notable Glenda Jackson films.

Besides her Academy Award wins and nominations, Glenda Jackson was shortlisted for the following:

Other Glenda Jackson award wins include:

* Stevie played briefly in Los Angeles for Academy Award consideration in 1978, but it would reach New York City screens only in 1981.

As an aside: in other Radio 4 news, in August Jeremy Irons will star as theater director Charles Arrowby in a two-part adaptation of Iris Murdoch’s Booker Prize-winning novel The Sea, The Sea. Additionally, Helen McCrory will play Murdoch in a presentation of Robin Brooks’ Murdoch’s Dream.

[1] As a result of redistricting, in 2010 Hampstead and Highgate became the reformatted constituency of Hampstead and Kilburn. That year, Glenda Jackson won the general election with a mere 42 votes ahead of the runner-up candidate.

But, however marginally, Hampstead and Kilburn has remained a Labour constituency. This year’s winner was Tulip Siddiq.

[2] The “Les Rougon-Macquart” literary series, published between 1871 and 1893, includes many of the best-known Emile Zola novels. Among them:

* Robert Bresson’s L’Argent (1983) is actually based on a Leo Tolstoy story.

Image of Vanessa Redgrave and Glenda Jackson in Mary, Queen of Scots: Universal Pictures, via The Independent.

Surprising news, She was a great talent. I had forgotten about The Patricia Neal Story. She was perfect for the role. Surprised there is no mention of Marat/Sade, The gonzo The Music Lovers or the darkly humorous Nasty Habits, but you are right about A Touch of Class. As good as she was as an actress, and she’s not bad in this thing, but this is surely one undeserved Oscar.