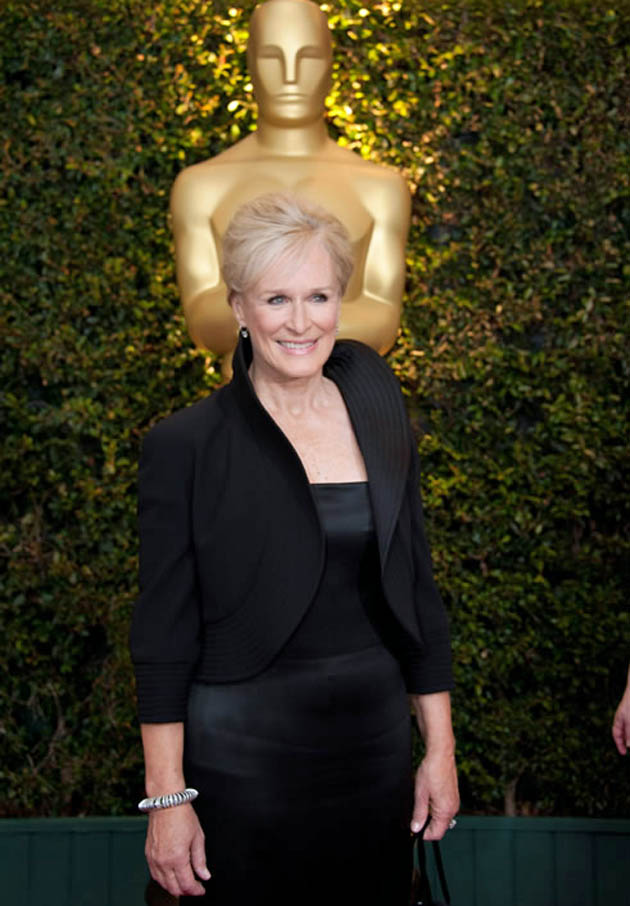 Five-time Academy Award nominee Glenn Close, a likely 2012 Best Actress Oscar contender for her performance as a woman passing for a man in Rodrigo García’s period drama Albert Nobbs, is pictured above arriving at the Academy of Motion Picture Arts and Sciences’ 2011 Governors Awards, held in the Grand Ballroom at Hollywood & Highland in Hollywood, on Saturday, Nov. 12.

Veteran actor James Earl Jones (The Great White Hope, the voice of Darth Vader in Star Wars) was a long-distance Honorary Academy Award honoree. Make-up artist Dick Smith (The World of Henry Orient, Dad), for his part, was present at the ceremony to receive his Honorary Oscar.

Glenn Close already has five Oscar nominations, all of them in the 1980s. 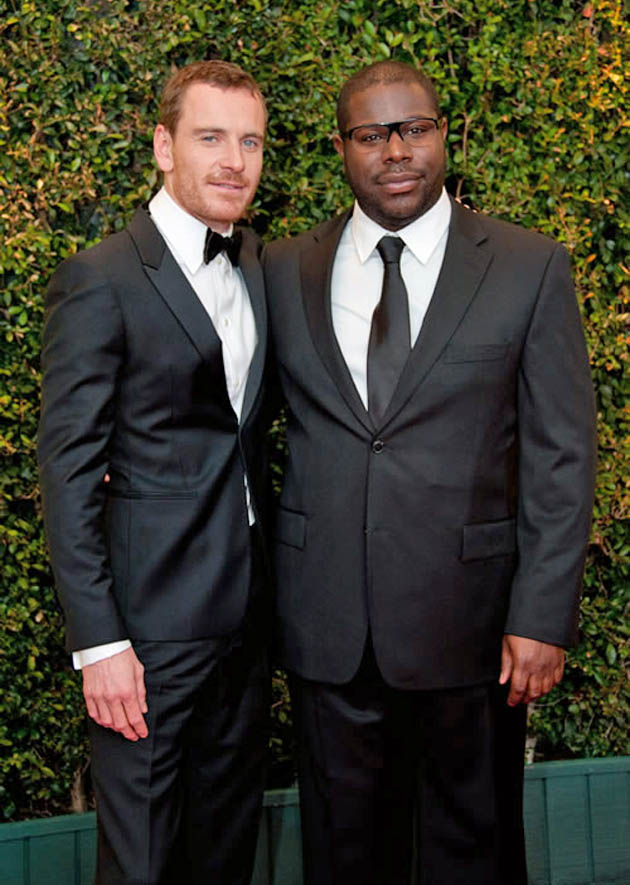 Actor Michael Fassbender and filmmaker Steve McQueen arrive at the Academy of Motion Picture Arts and Sciences’ Governors Awards ceremony, which was held in the Grand Ballroom at Hollywood & Highland in Hollywood on Saturday, Nov. 12, ’11.

This year’s three honorees were:

Steve McQueen and Michael Fassbender are both potential 2012 Oscar contenders for their work on the psychological drama Shame. A couple of years ago, the duo had collaborated on the political drama Hunger – not to be confused with the vampirical drama The Hunger, Tony Scott’s slick 1983 production starring Catherine Deneuve, David Bowie, and Susan Sarandon.

Michael Fassbender has kept himself busy in 2011. Besides Shame, which also features Carey Mulligan, he was seen in the following:

Additionally, Fassbender is set to star in Steve McQueen’s next effort, Twelve Years a Slave, and he is in talks to star in the planned RoboCop remake. 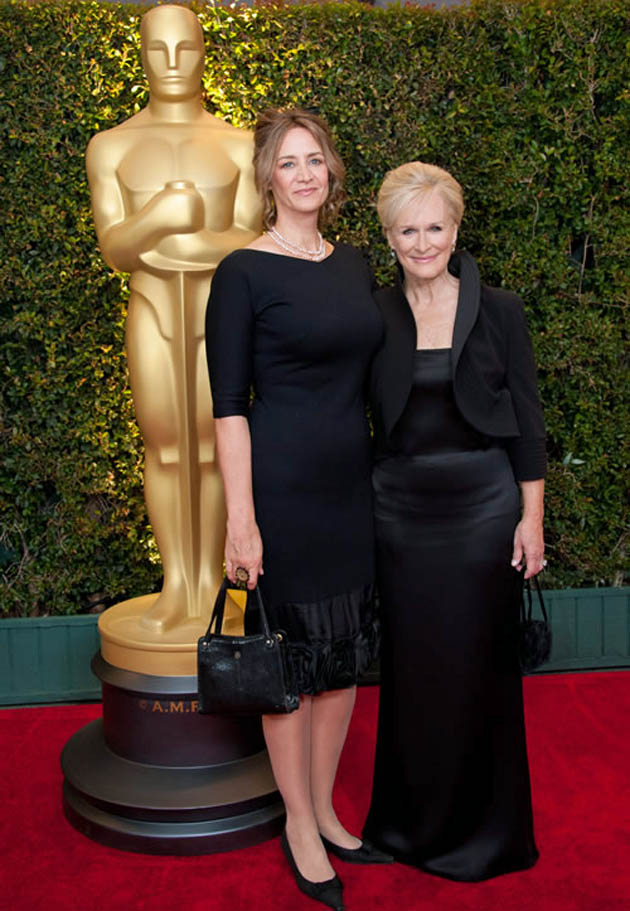 Janet McTeer and Glenn Close, Albert Nobbs’ two “manly” female characters, pose for the camera while on the Red Carpet of the 2011 Governors Awards.

Janet McTeer was nominated for the 1999 Best Actress Oscar for Gavin O’Connor’s comedy-drama Tumbleweeds (1999), in which she plays Kimberly J. Brown’s mother. She lost to Hilary Swank – curiously, in a “manly” role – in Kimberly Peirce’s Boys Don’t Cry.

This year – or rather, in 2012 – she is a likely Best Supporting Actress contender for Rodrigo García’s Albert Nobbs. 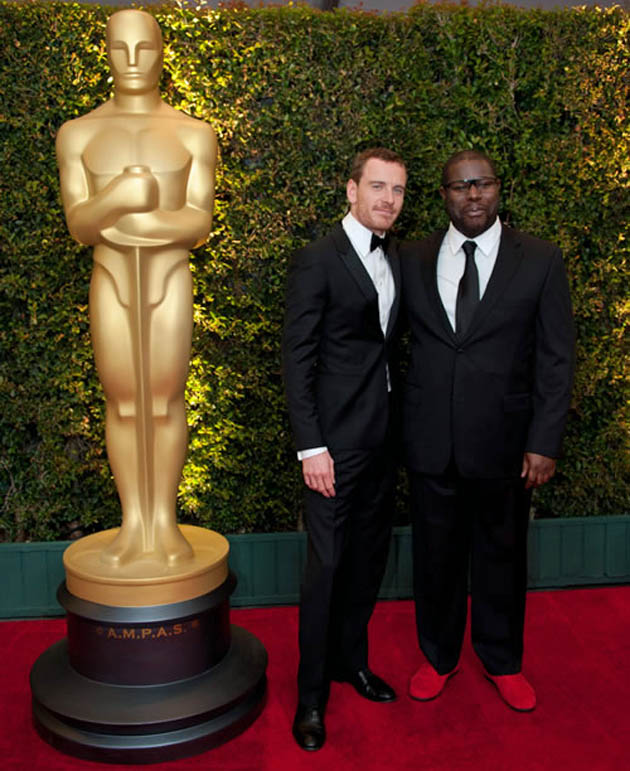 Michael Fassbender and director Steve McQueen – the one with the shoes matching the Governors Awards Red Carpet – are seen above just outside the Grand Ballroom at Hollywood & Highland in Hollywood.

Like Tate Taylor, Fassbender and McQueen are both potential contenders for the 2012 Academy Awards – for their psychological drama Shame. The two had previously collaborated on the well-received 2008 political drama Hunger, starring Fassbender as imprisoned IRA member Bobby Sands.

Michael Fassbender has been quite busy in 2011. Besides Shame, which also features Carey Mulligan, there have been:

Tate Taylor, a potential Best Director Academy Award nominee for the socially conscious domestic sleeper hit The Help, arrives at the Academy of Motion Picture Arts and Sciences’ 2011 Governors Awards, held in the Grand Ballroom at Hollywood & Highland in Hollywood on Saturday, Nov. 12.

While onstage accepting her award, Winfrey mentioned The Help, a likely Best Picture Oscar contender. The show business magnate said that the movie, which is set in the American South of the 1960s, felt like the story of her family, as both her mother and her grandmother had been maids to Southern white families.

Based on a novel by Kathryn Stockett (who reportedly was Tate Taylor’s pre-schoolmate in Mississippi), The Help stars the following:

The Mississippi-born (June 3, 1969, in Jackson) actor-director-screenwriter-producer Tate Taylor has been working in movies since the late 1990s. Prior to The Help, his only two directorial efforts have been the following: 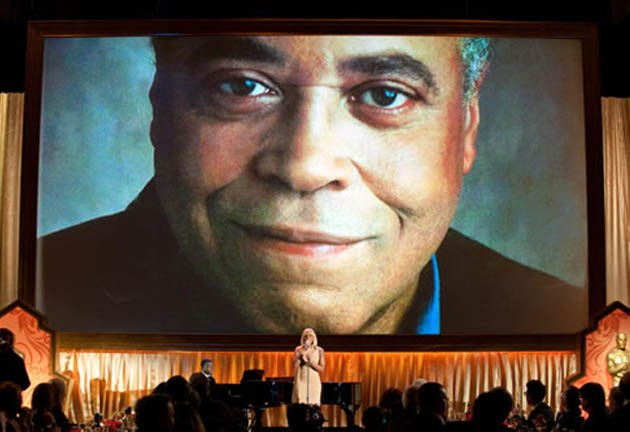 A Best Actor Academy Award nominee for Martin Ritt’s The Great White Hope (1970) and the booming voice of both Star Wars’ Darth Vader and Mufasa in The Lion King, Honorary Oscar recipient James Earl Jones, 80, had to accept his award – via a pre-taped ceremony – from London, where he is starring opposite Best Supporting Actress Oscar winner Vanessa Redgrave (Julia, 1977) in a stage production of Driving Miss Daisy.

“I am gobsmacked at this improbable moment in my life,” Jones remarked. “You cannot be an actor like I am and not have been in some of the worst movies like I have.” (Redgrave, who has also had her share of poor movies – e.g., Bear Island – received her own Academy recognition the following day.)

James Earl Jones – like Tate Taylor, born in Mississippi (Jan. 17, 1931, in Arkabutla) – has been featured in more than 70 big-screen productions, mostly in supporting roles, since his 1964 debut in Stanley Kubrick’s Dr. Strangelove. Here are a couple of notable titles: 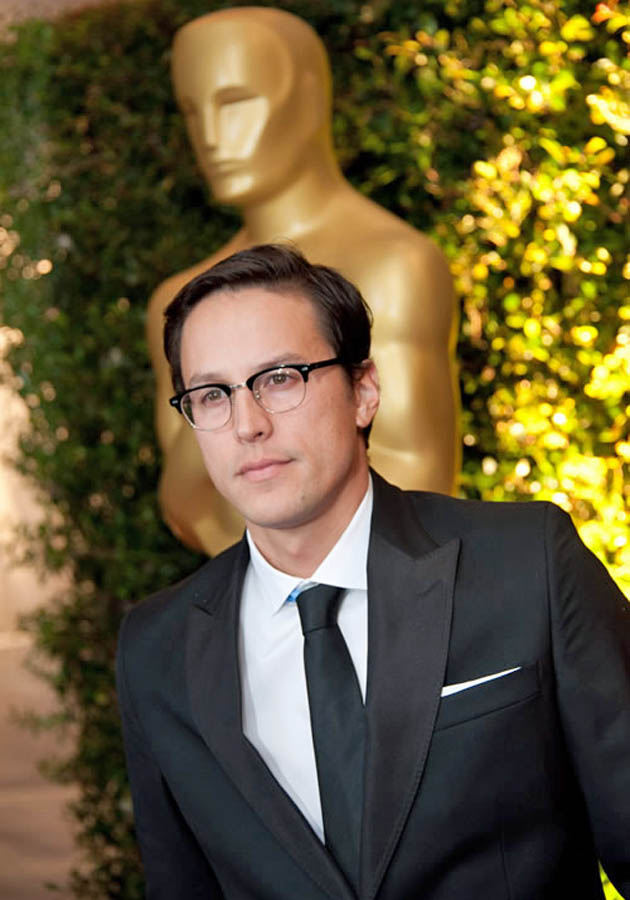 In 2011 Fukunaga was also an executive producer on Andrew Okpeaha MacLean’s Alaska-set thriller On the Ice.

There have been countless movie versions of Charlotte Brontë’s classic Gothic novel – in addition to a number of variations on the tale. Notable ones include the following:

Based on Daphne Du Maurier’s novel of the same name, Alfred Hitchcock’s 1940 Best Picture Academy Award winner, Rebecca, was not only a Jane Eyre rehash of sorts but it has also been accused of being a plagiarized adaptation of Brazilian author Carolina Nabuco’s A Sucessora (“The Successor”). In Rebecca, the 1943 Jane Eyre, Joan Fontaine, starred as the mousy heroine “I” de Winter, while Laurence Olivier played the Rochester-like leading man.

Another 1940 Best Picture Oscar nominee, Anatole Litvak’s All This and Heaven Too, also shared elements in common with Jane Eyre. Based on a novel by Rachel Field, itself inspired by real-life events, the film starred Bette Davis, Charles Boyer, and Best Supporting Actress Oscar nominee Barbara O’Neil. 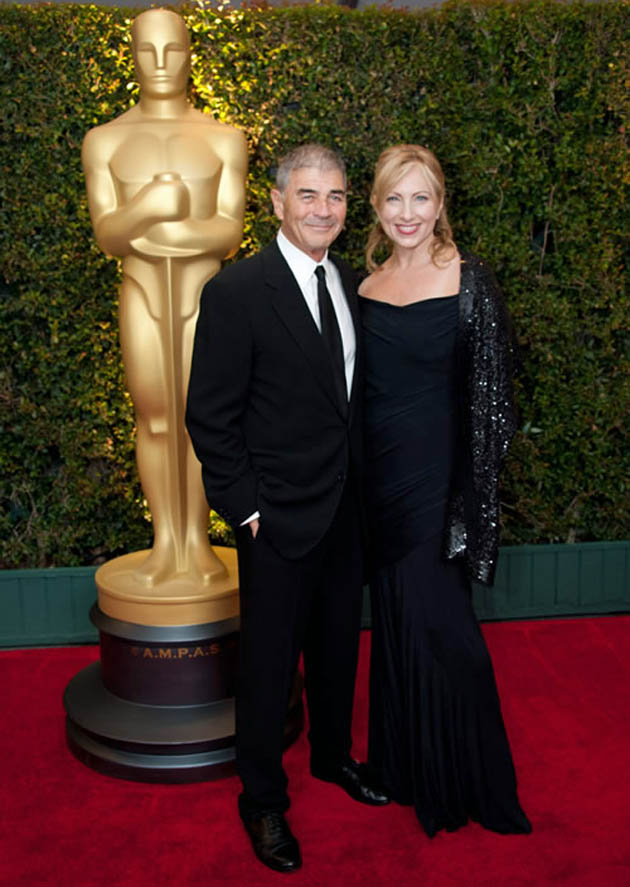 Robert Forster, soon to be seen supporting George Clooney in Alexander Payne’s likely multiple Oscar contender The Descendants, is seen with actress Denise Grayson on the 2011 Governors Awards’ Red Carpet just outside the Grand Ballroom at Hollywood & Highland in Hollywood, on Saturday, Nov. 12.

James Earl Jones (Best Actor Oscar nominee for The Great White Hope) was a long-distance Honorary Oscar honoree, as he was in London, appearing onstage with Vanessa Redgrave in Driving Miss Daisy. Make-up artist Dick Smith (The Exorcist, The Godfather, House on Haunted Hill, The Godfather: Part II), for his part, was present at the ceremony to receive his Honorary Oscar.

TV celebrity Oprah Winfrey was the recipient of the Jean Hersholt Humanitarian Award. 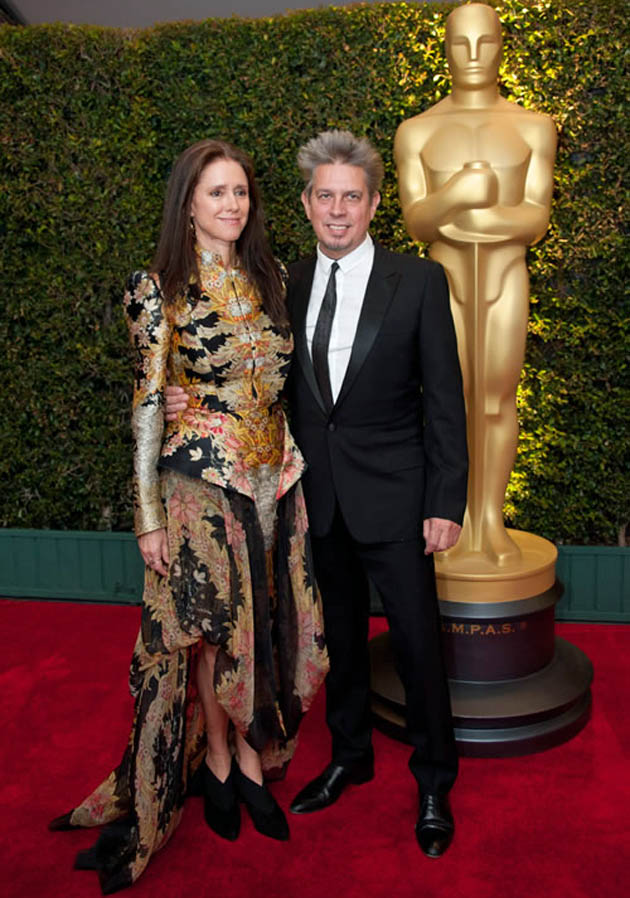 Oscar-nominated songwriter Julie Taymor, in the news after suing Broadway’s Spider-Man producer and lambasting U2’s Bono and The Edge, is seen next to Oscar-winning composer Elliot Goldenthal on the red carpet at the 2011 Governors Awards. 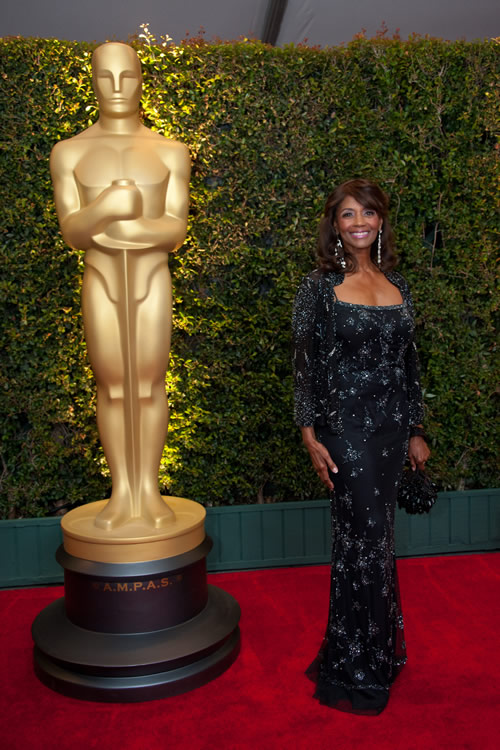 Actress Margaret Avery, best known for her performance opposite Whoopi Goldberg in Steven Spielberg’s The Color Purple, attends the 2011 Governors Awards in the Grand Ballroom at Hollywood & Highland in Hollywood, on Saturday, November 12. [Photo: Matt Petit / © A.M.P.A.S.] Actor James Earl Jones, currently appearing with Vanessa Redgrave in a stage production of Driving Miss Daisy in London, was a long-distance Honorary Oscar honoree; make-up artist Dick Smith (The Hunger, The Deer Hunter), however, was present at the ceremony to receive his Honorary Oscar. TV talk show hostess Oprah Winfrey was the recipient of the Jean Hersholt Humanitarian Award.

Margaret Avery and Oprah Winfrey were both Best Supporting Actress Academy Award nominees for The Color Purple. They lost the Oscar to Anjelica Huston in John Huston’s Prizzi’s Honor. Avery created a stir at the time because of her Oscar ads. 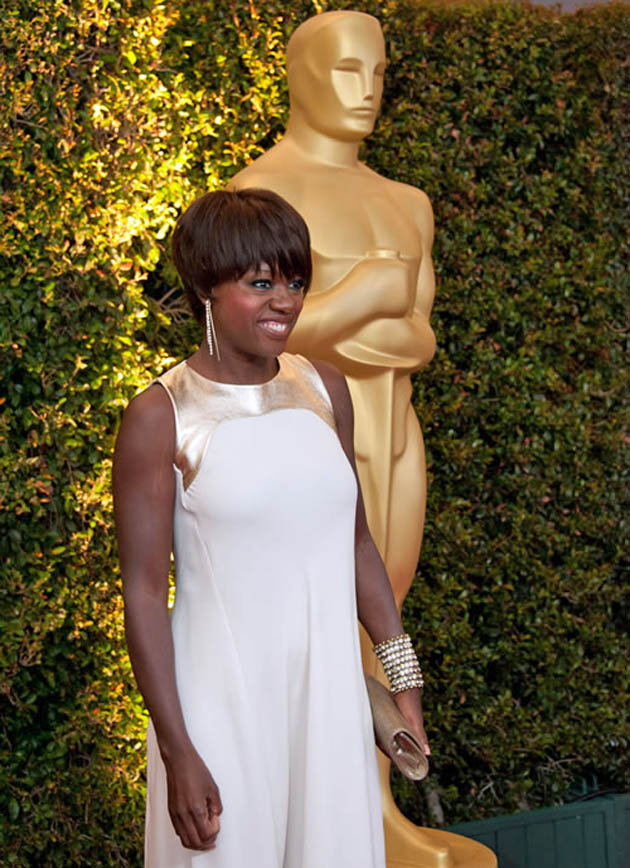 Viola Davis, who stars in Tate Taylor’s socially conscious ensemble drama The Help, is seen arriving at the Academy’s Governors Awards held in the Grand Ballroom at Hollywood & Highland in Hollywood.

These two very talented and creative men remind me of a younger Robert De Niro and a younger Martin Scorsese, as they trail blazed their way through the annals of movie history with eight excellent Oscar worthy movies. I am wishing greater success to Actor Michael Fassbender and Director Steve McQueen!