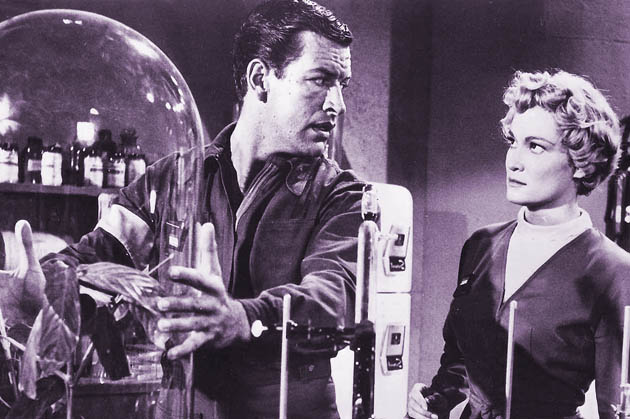 Film and television multitasker – chiefly director and producer – Herbert L. Strock, whose big-screen credits include Gog (1954) and I Was a Teenage Frankenstein (1957), died of heart failure following a car accident in Riverside, a community northeast of Los Angeles, on Nov. 30. He was 87.

Strock’s directorial television work includes a number of episodes from the series I Led 3 Lives, Science Fiction Theatre, Highway Patrol, Sea Hunt, and 77 Sunset Strip, among others. Among his feature films as a director, almost invariably B horror productions, are the following:

Produced by Ivan Tors*, the 3D-filmed Gog revolves around the threat posed by artificial intelligence: a deadly supercomputer named NOVAC takes over an underground space research base in New Mexico, where he is assisted by two A.I. henchmen with rhyming Biblical names, Gog and Magog.

In the Gog 1954 cast: Richard Egan, Constance Dowling in her final big-screen appearance (she would become Ivan Tors’ wife from 1955–her death in 1969), and former Bette Davis leading man Herbert Marshall (The Letter, The Little Foxes).

An uncredited Strock also reportedly helped in the direction of a couple of Ivan Tors productions of the mid-1950s, The Magnetic Monster (1953) – which, like Gog, features a supercomputer, the MANIAC – and Riders to the Stars (1954).

From Gog 1954 to Brazil’s Cinema Novo of the 1960s: Jarbas Barbosa, a pioneering producer of Brazil’s neorealism- and Nouvelle Vague-influenced Cinema Novo, died on Dec. 10 in Recife, in the northeastern state of Pernambuco. Barbosa was 76.

Among the Cinema Novo releases Jarbas Barbosa produced or co-produced are:

After his vehicle breaks down, a truck driver (Átila Iório) gets stuck in a drought-stricken small town in Bahia, where heavily armed soldiers have been brought over to protect the mayor’s store from the area’s starved hordes. Meanwhile, a Christian “holy man” urges local peasants to follow a “sacred ox” in order to bring an end to the devastating drought. It all ends in tragedy.

Also in the 1960s, Barbosa was an assistant producer on Glauber Rocha’s Cinema Novo classic Black God, White Devil / Deus e o Diabo na Terra do Sol (lit., “God and the Devil in the Land of the Sun,” 1964), the story of a ranch hand turned rural bandit (Geraldo Del Rey) in the Brazilian Northeast.

Jarbas Barbosa’s brother, Abelardo Barbosa, was a well-known television personality known as Chacrinha. Abelardo died of a heart attack in 1988.