Even so, it would have been interesting to witness the reaction of the Golden Globe Awards audience as they heard Julian Schnabel’s name announced as the Hollywood Foreign Press Association’s Best Director of 2007 for the French-language Triumph of the Human Spirit drama The Diving Bell and the Butterfly / Le Scaphandre et le papillon.

The odds-on favorites had been Joel and Ethan Coen for the all-American thriller No Country for Old Men, which earned the Coen brothers a consolation prize in the form of the Best Screenplay Globe. (See further below the full list of this year’s Golden Globe Awards’ winners and nominees.)

Just as interesting would have been the star-studded crowd’s reaction when Joe Wright’s (mostly) British-made Atonement, which has received precious little love from U.S. film critics’ groups and no love whatsoever from the Screen Actors Guild, was named the Golden Globe Awards’ Best Picture Drama – in place of critics’ favorite No Country for Old Men or its awards season runner-up, Paul Thomas Anderson’s There Will Be Blood.

Indeed, despite its seven nominations – more than any other film this year – Atonement was hardly a front-runner. An international box office hit, the period romantic drama starring Keira Knightley, James McAvoy, Saoirse Ronan, and veteran Vanessa Redgrave (Best Supporting Actress Oscar winner for Julia, 1977) ended up winning only one other Globe, for Dario Marianelli’s score.

And if Julia Schnabel’s French-language win wasn’t enough, Marion Cotillard, not Ellen Page of the domestic (English-language) sleeper hit Juno, was named Best Actress – Musical or Comedy for her performance as chanteuse Edith Piaf in Olivier Dahan’s French-made biopic La Vie en Rose / La Môme – which, one should point out, happens to be neither a comedy nor a musical.

Schnabel’s and Cotillard’s wins are particularly noteworthy because the Hollywood Foreign Press Association – despite the presence of the word “foreign” in its name – has rarely nominated non-English-language productions in the Golden Globe Awards’ regular categories.

That should come as no surprise. After all, the Golden Globe Awards are geared to the American film industry and American TV viewers. Non-English-language films, for instance, are actually ineligible in the Best Picture Drama/Musical or Comedy categories.

Among this year’s other unexpected turn of events was the HFPA’s choice of Tim Burton’s commercially underperforming dark musical Sweeney Todd: The Demon Barber of Fleet Street as Best Picture Musical or Comedy – instead of Jason Reitman’s more popular and better-received Juno.

To a lesser extent, the choice of Best Supporting Actress Cate Blanchett, as one of the many Bob Dylan incarnations in Todd Haynes’ modest commercial performer I’m Not There, might have raised a few eyebrows as well. Two-time Tony nominee Amy Ryan has been the Best Supporting Actress favorite among U.S. critics for her rotten mom in Ben Affleck’s mystery drama Gone Baby Gone.

Among the more predictable winners were Julie Christie as Best Actress – Drama for her performance as a woman suffering from Alzheimer’s disease in Sarah Polley’s Canadian production Away from Her; Daniel Day-Lewis as Best Actor – Drama for his star turn as a greedy oil baron in There Will Be Blood; and Johnny Depp as Best Actor – Musical or Comedy for his singing, serial-killing barber in Sweeney Todd: The Demon Barber of Fleet Street.

Sort of a surprise: this year, Johnny Depp was the only U.S.-born actor to win a Globe in the feature film categories. Besides the French Marion Cotillard, the Australian Cate Blanchett, and the British Julie Christie and Daniel Day-Lewis, the other non-American winner was Spaniard Javier Bardem, named Best Supporting Actor for his peculiarly coiffed hitman in No Country for Old Men – in the words of Golden Globe Awards newscast co-presenter Billy Bush (of Access Hollywood), one of the greatest screen villains ever, “in a category with Darth Vader.”

Julie Christie in Away from Her with Gordon Pinsent. In movies since Ken Annakin’s 1962 crime comedy Crooks Anonymous, Julie Christie is both a veteran and a first-timer at the Golden Globe Awards: she has been nominated three times – the first time around more than four decades ago, for John Schlesinger’s Darling (1965) – but only this year has she been named the winner of a Globe statuette: for Sarah Polley’s Canadian drama Away from Her, in which Christie plays a woman suffering from Alzheimer’s disease. Mostly bypassed this awards season (except in Canada), Gordon Pinsent plays her husband.

Julie Christie’s win was her first at the Golden Globe Awards. In movies for more than four decades, Christie had been nominated twice before:

Daniel Day-Lewis’ win was also his first. He had four previous Golden Globe nominations, all in the Best Actor – Drama category:

Johnny Depp is the third veteran who won his first Golden Globe this year, after being an also-ran seven times – all but one (Finding Neverland) in the Best Actor – Musical or Comedy category:

The remaining winners in the 2008 Golden Globe Awards’ big-screen categories were Best Animated Film Ratatouille, the Brad Bird-directed story of a French rat with gourmet inclinations, and Best Original Song “Guaranteed,” the Eddie Vedder composition heard in Sean Penn’s Into the Wild.

Of note, the Globes’ TV categories were dominated by film personalities. Examples include:

Lastly, Steven Spielberg will be handed his Cecil B. DeMille Award in 2009.

Who cares about the Golden Globe Awards?

But really, who cares about the Golden Globe Awards?

Ask people who’ve ever won or been nominated for one. Ask film studios and distributors, who plaster their “For Your Consideration” Oscar ads with “nominated for XYZ Golden Globes” notices. Ask film exhibitors, who see a box office bump – whether big or small – following the awards announcements. And ask Academy members who have made a point of watching their Atonement, Across the Universe, and The Great Debaters screeners because of these films’ key Golden Globe nominations.

But really, are the Golden Globe Awards a barometer of quality?

What film award-giving entity is a “barometer of quality”? Critics’ groups? Hollywood guilds? The Academy and its Spanish, French, Mexican, etc., cousins? Any of the myriad juries of the world’s myriad film festivals?

Below is the long, long list of this year’s Golden Globe Awards’ winners and nominees. 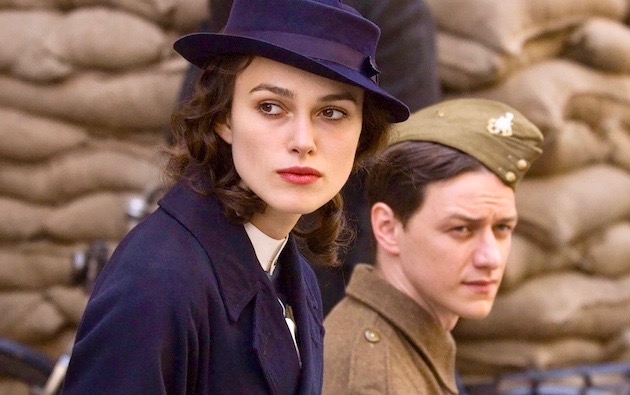 Atonement with Keira Knightley and James McAvoy: Golden Globe Awards’ unexpected Best Picture Drama. Based on Ian McEwan’s 2001 novel, the (mostly) British-made Atonement mixes elements from The Children’s Hour and The Go-Between: a lie affects the lives of a housekeeper’s son (James McAvoy), his wealthy bosses’ daughter (Keira Knightley), and the liar herself: as a teenager played by Saoirse Ronan, who later grows into Romola Garai and, further down the road, Vanessa Redgrave. Mostly bypassed this awards season, Atonement was the surprise Best Picture Drama winner at the Golden Globe Awards’ non-ceremony.

Best Mini-Series or TV Movie
Bury My Heart at Wounded Knee.
The Company.
Five Days.
* Longford.
The State Within.

Gordon Pinsent and Julie Christie in Away from Her image: Lionsgate Films.