Acting as a lighter version of Ricky Gervais, Tina Fey and Amy Poehler took a series of (mostly) mild jabs at the rich and famous sitting in the audience at the Beverly Hilton Hotel in Beverly Hills on Sunday evening, Jan. 12. As to be expected considering the sheer number of jokes, some hit their targets whereas others hit the floor.

Along the way, Fey and Poehler went for stereotypes when making fun of television viewers – “all of the women and gay men watching from home” – and targeted a physical attribute of one of this year’s (male) honorees, Woody Allen. Remarking on the fact that Allen and Martin Scorsese have both been named Cecil B. DeMille Award recipients – Scorsese in 2010 – Poehler reached the conclusion, much to the delight of the crowd, that the award must be given to the “tiniest man with the biggest glasses.” (I’m not sure if a male host poking fun of a big-sized actress would have elicited laughs or groans.)

Fey also took that tricky route when she referred to her “blacklist” – “who’s invited to my room tonight. I’m looking at you, Somali pirates. ‘I am the captain now,’” while the camera focused on Captain Phillips’ Best Supporting Actor nominee Barkhad Abdi. Golden Globe attendees (regardless of gender, it seems) were also advised to have sex with their limo drivers before they became famous. (Abdi used to be one, though the point of Fey’s joke remained fuzzy.) 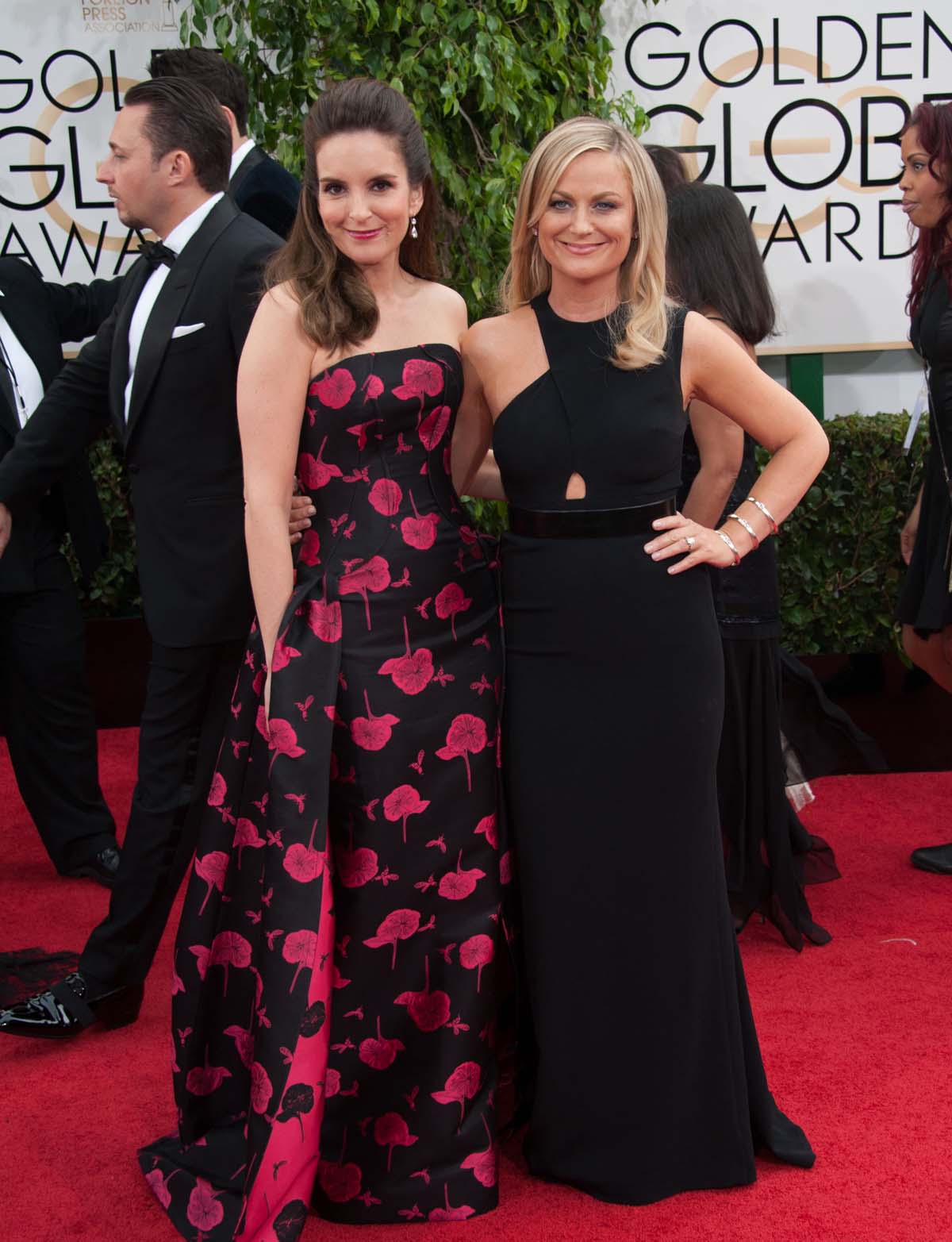 “Women in Hollywood” was the focus of several barbs, among them the following Tina Fey remarks:

But by far the funniest Tina Fey-Amy Poehler joke had to do with Steve McQueen’s 12 Years a Slave, which some have hailed as an eye-opening must-see. At one point, a freshly enlightened Poehler told the crowd that “after seeing that movie I will never look at slavery the same way again.”

The most humorous moment of the evening, however, belonged to neither Tina Fey nor Amy Poehler – but to double (film/TV) Golden Globe nominee Julia Louis-Dreyfus. Sitting in the film section, smoking an e-cigarette, and wearing shades à la Jack Nicholson, Louis-Dreyfus refused to acknowledge her television pals Fey and Poehler while motioning to Reese Witherspoon that no selfies were allowed.

But for the most part, the 2014 Golden Globes were both quite tame and quite lame, lacking wit, humor, and pathos. There were the usual unbearably dull Thank Yous – to company bosses and agents, Mom, Dad, Little Children – with American Hustle‘s Amy Adams telling the orchestra that they would not stop her from sending a message to her daughter, while later on Matthew McConaughey went on about life lessons he learned from his mother. Perhaps there are some who will find that sort of stuff immensely moving; but in several instances the get-the-hell-off music felt appropriate.

Speaking of the Golden Globe’s orchestra – the most obnoxious feature at this year’s telecast, along with the countless squeals of delight and phony surprise whenever someone won an award – Cate Blanchett delivered what may have been the best bit of the evening when she wondered out loud if people at home could hear the (get-lost) music, or if TV viewers thought Golden Globe winners suddenly started talking very fast because they had been unexpectedly seized by panic attacks.

The members of the Hollywood Foreign Press Association decided to spread the love around at the 2014 Golden Globes. Neither of the two Best Picture winners – Steve McQueen’s 12 Years a Slave in the Drama category; David O. Russell’s American Hustle in the Comedy or Musical category – succeeded in taking home either the Best Director or the Best Screenplay Golden Globe. These went to, respectively, Alfonso Cuarón for the sentimental thriller Gravity and Spike Jonze for Her, starring Joaquin Phoenix as a man who falls in love with a computer featuring Scarlett Johansson’s voice.

And the year before that, Alejandro González-Iñárritu’s Babel was named Best Picture – Drama and Bill Condon’s Dreamgirls was the Best Picture – Comedy or Musical, while Martin Scorsese was the Best Director for The Departed and Peter Morgan won Best Screenplay for Stephen Frears’ The Queen.

NBC or whoever organized the Golden Globes 2014 ceremony sat Jacqueline Bisset way in the back of the awards ceremony ballroom. Never mind the fact that Bisset’s film career began nearly half a century ago and that she was a Golden Globe nominee in the Best Supporting Actress in a Series, Mini-Series, or Motion Picture Made for Television category for the mini-series Dancing on the Edge. As a result, it took Bisset, who seemed about as surprised as everybody else when her named was called up, more than a minute to reach the stage.

Visibly moved, Bisset had to wait a few more seconds before she was able to talk. By the time she began with her somewhat rambling acceptance speech, the orchestra decided it was time for her to get off the stage already, and walk the long mile back to her seat (or to the press room and then back to her seat).

While talking, Jacqueline Bisset was momentarily bleeped, but the “shit” she uttered managed to be clearly understood. Notably, she also reminisced about her mother, who apparently was unforgiving when it came to people who gave her shit: “Go to hell and don’t come back.” Now, it’s unclear whether or not that was directed at the Golden Globe’s orchestra.

Anyhow, Jacqueline Bisset isn’t her mother, or so she claimed. Before blowing a kiss to the audience, the 69-year-old veteran actress added:

And that apparently means the obnoxious Golden Globes 2014 orchestra (clearly obeying orders from above) will – eventually – be forgiven.

By the way, Jacqueline Bisset’s 2014 Golden Globes competitors in the Best Supporting Actress in a Series, Mini-Series, or Motion Picture Made for Television category were the following: Janet McTeer for The White Queen; Hayden Panettiere for Nashville; Monica Potter for Parenthood, and Sofia Vergara for Modern Family. 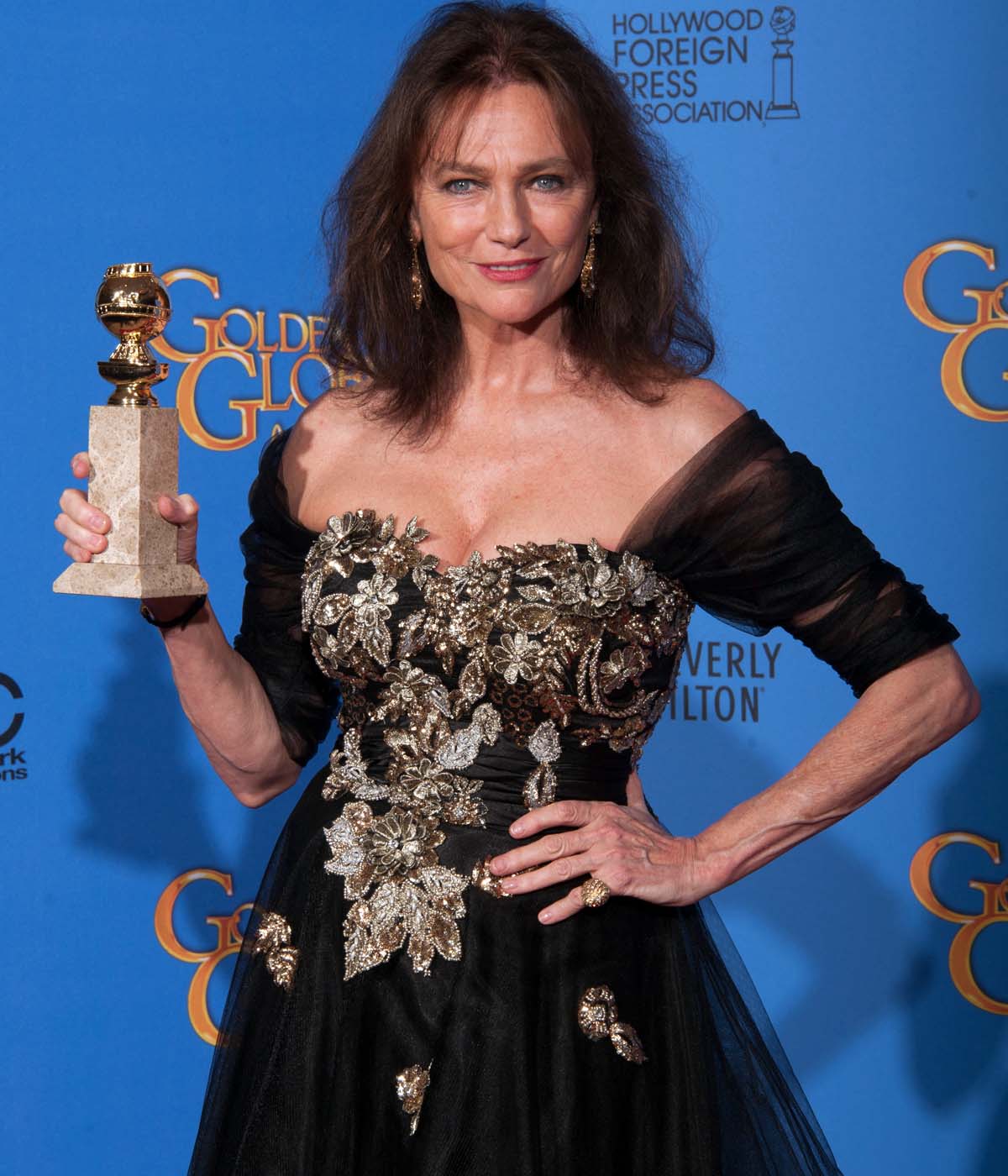 Accepting from presenter Emma Stone the 2014 Cecil B. DeMille Award for absentee Woody Allen, Diane Keaton (Sleeper, Love and Death, Annie Hall, Interiors, Manhattan, Manhattan Murder Mystery) was a likable presence at the January 12, 2014, Golden Globes ceremony, but her reminiscences about Allen were clearly PG-rated, going on about their “friendship” as if the two had always been just pals. Was that lullaby she sang moving or would Woody Allen have been right in yelling, “get the hook and get her off the god damn stage”? You decide.

Now, in all fairness, Diane Keaton’s Woody Allen tribute wasn’t all PG-rated treacle, as she was twice bleeped by the censors. Apparently, NBC – and the ludicrous FCC – believe television audiences should be treated as if we were all three-year-olds.

Censorship on American television is an irritation, but hardly anything new. More disturbing was watching people laugh (Blue Jasmine star Cate Blanchett got a close up) at a Woody Allen comment about immortality. The “punchline,” which attendees found hilarious, was that immortality through film did François Truffaut no good.

Here’s the Woody Allen quote, as told by Diane Keaton at the Golden Globes ceremony (via The Hollywood Reporter):

One of the nice things about writing or any art is that if the thing’s real, it just kind of lives. All the success over it or the rejection, none of that really matters because in the end, the thing will survive or not survive on its merits. Immortality via art is no big deal. François Truffaut died. His films live on, but that’s not much help to François Truffaut. As I’ve said many times, rather than live on in the hearts and minds of my fellow man, I would rather live on in my apartment.

A father of three and at the time in a relationship with Fanny Ardant, Truffaut died of a brain tumor at age 52 in 1984.

As an aside: On Twitter, one individual wondered how many Hollywood Foreign Press Association members could name a single Cecil B. DeMille movie. For my part, I also wondered – but didn’t bother tweeting about it – how many of those film people present at the Beverly Hilton Hotel’s ballroom could have named one single François Truffaut movie. (That is, apart from Jacqueline Bisset, who starred for Truffaut in Day for Night back in 1973. And no, Steven Spielberg’s Close Encounters of the Third Kind, in which Truffaut has a supporting role, doesn’t count.)

Needless to say, don’t expect a Cecil B. DeMille Award for Mia Farrow any time soon.

There’s more: Ronan Farrow, Mia Farrow and Woody Allen’s 26-year-old son (or, “possibly,” Mia Farrow and Frank Sinatra’s), tweeted the following: “Missed the Woody Allen tribute – did they put the part where a woman publicly confirmed he molested her at age 7 before or after Annie Hall?”

Needless to say, Ronan Farrow’s 140 characters were a phenomenal hit, getting retweeted 9,860 times as of Monday morning.

Among the nominees (including the directors and producers of nominated films) for the 2014 Golden Globes – and who may be seen parading along the 2014 Golden Globe’s live streaming Red Carpet – are: Cate Blanchett and Sally Hawkins, Blue Jasmine; Alfonso Cuarón and Sandra Bullock (and perhaps non-nominee George Clooney), Gravity; Judi Dench and Stephen Frears, Philomena; John Lee Hancock, Emma Thompson, and Tom Hanks, Saving Mr. Banks; and Kate Winslet, Labor Day.

T- I’ve met her, she’s lovely and charming. Do you expect her to stand there while she answers questions and clean her glasses? There are people there to assist the stars with things just like that.

As to the fact that you don’t consider her hot anymore. Perhaps she doesn’t look like she did in Bullitt 46 years ago but the woman is 69 and looks terrific for that age. Not pulled and plastic but like a mature woman who had taken care of herself. Besides it wasn’t a wet T shirt contest, she won an award for her acting, one she didn’t expect to win based on previous experience so she wasn’t prepared. I thought her speech was genuine and real and a whole lot better than a bunch of insincere thanks to people that aren’t really meant. I seemed longer than it was since whoever organized the event had no idea how to place the nominees and had many of them, including Jackie, in the hinterlands.

How obnoxious is this woman! “Nicky, could you clean my glasses?” Gosh what an obnoxious woman not preparing for anything. She’s not hot anymore. She needs to get a grip on reality.