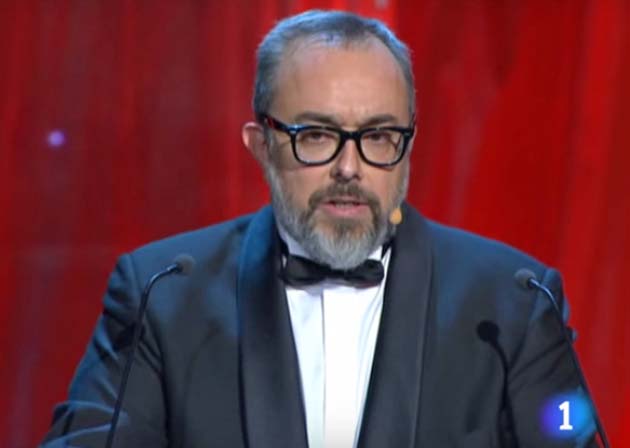 Unlike the staid Bafta ceremony held in London earlier this evening, Feb. 13 the Spanish Academy of Motion Picture Arts and Sciences’ 25th Goya Awards ceremony, which took place at Madrid’s Teatro Real, was anything but. (See full list of 2011 Goya Award winners and nominees further below.)

In fact, the excitement began days before the ceremony, when Spanish Academy president Alex de la Iglesia, whose The Last Circus / Balada triste de trompeta was in the running for 15 Goya Awards, including Best Film and Best Director, announced he would step down the day after the Goyas.

De la Iglesia was irked by former Spanish Academy president and current minister of culture Ángeles González-Sinde, whose anti-online piracy law is perceived by many as a direct attack on net neutrality and a subservient response to American pressure (as found in WikiLeaks cables).

While celebrities were walking the red carpet outside the Teatro Real, protesters greeted González-Sinde with loud boos. Eventual Best Actor winner Javier Bardem (for Biutiful) also received his share of boos after having defended the Sinde Law in the Madrid daily El Pais. Some went as far as throwing eggs at the arrivals.

At the ceremony itself, most winners thanked their coworkers, companions, and mothers. But some made political statements as well.

Uruguayan-born singer-composer Jorge Drexler sang his Goya acceptance speech for Pole‘s “Que el soneto nos tome por sorpresa” – as he had done after winning the Oscar for The Motorcycle Diaries’ “Al otro lado del río.” Through his Goya ditty, Drexler made it clear he was not “going to ask forgiveness for earning my living through my singing, no matter how many eggs are thrown at me.”

At the end of his interminable speech, Honorary Goya winner Mario Camus, the director of classics such as La colmena and The Holy Innocents / Los santos inocentes, talked about “protecting the cinema,” a clear allusion to illegal downloads. (Ironically, many of Camus’ movies can’t be found [legally] on DVD.)

But the highlight of the evening was Alex de la Iglesia’s impassioned pro-Internet speech, while listening stone-faced in the audience were González-Sinde and Even the Rain director Icíar Bollaín, with whom de la Iglesia had a recent well-publicized falling out.

Considering de la Iglesia’s stance, perhaps it was no coincidence that The Last Circus ended up winning a mere two of its 15 Goya nominations: Best Make-Up and Hair and Best Visual Effects.

And that wasn’t all.

Later on, the Goya Awards ceremony was interrupted right when the Best Actor winner was going to be announced. Infamous Catalan party crasher Jaume Marquet, a.k.a. Jimmy Jump, unexpectedly popped up onstage, covered the Best Actor Goya statuette with what looked like a Santa Claus hat, and was whisked away by security after saying a few words on the microphone.

Following that stunt, Javier Bardem’s acceptance speech felt quite anticlimactic. [Update: That was no Santa Claus hat. It was a barretina, a typical Catalonian hat. See comments section further below.]

Also of note, presenter Rossy de Palma (Women on the Verge of a Nervous Breakdown, Kika) paid homage to the recently deceased French actress Maria Schneider, declaring that the film world failed to treat the Last Tango in Paris leading lady with the appropriate respect. 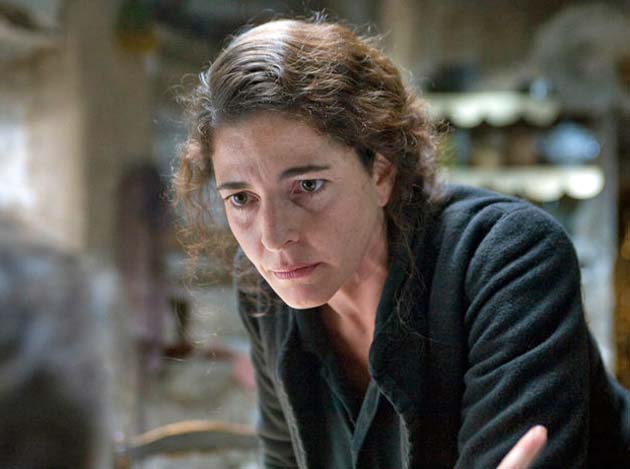 Based on a novel by Emili Teixidor, the Catalan-spoken drama is set in the aftermath of the Spanish Civil War. Most Promising Actor Francesc Colomer plays an 11-year-old whose family life has been deeply scarred by the war.

Javier Bardem picked up his fifth Goya – fourth in the Best Actor category – this time for his Oscar-nominated performance as a dying con man in Alejandro González Iñárritu’s Biutiful.

Karra Elejalde was the Best Supporting Actor for his portrayal of an actor essaying the role of Christopher Columbus in Icíar Bollaín’s Bolivian-set Even the Rain / También la lluvia, which also earned awards for composer Alberto Iglesias and for the film’s executive / line producer (a category that doesn’t exist at the Oscars.) 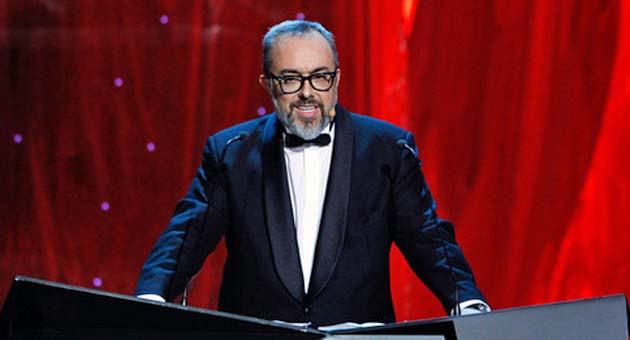 Below is the English translation of a brief section of Alex de la Iglesia’s lengthy – and quite remarkable – speech at the 2011 Goya Awards ceremony.

As mentioned in my previous post, the director of The Last Circus and The Perfect Crime will be stepping down as president of the Spanish Academy of Motion Picture Arts and Sciences following disagreements over an anti-piracy law that has pitted sections of the Spanish government and the Spanish Academy against those who see the law as an attack on the Internet itself.

De la Iglesia began his speech by reminding the crowd at the Teatro Real that they were there because a quarter century ago a group of filmmakers set their differences aside to create the Spanish Academy at a time when the Spanish film industry faced a crisis as serious as the one facing it now.

The text below, translated via the site publico.es, is a condensed version of Alex de la Iglesia’s speech. The complete translation can be found at the Spanish cinema blog Nobody Knows Anybody.

Twenty-five years ago, no one in our industry could have imagined that something like the Internet would have revolutionized our industry. The Internet isn’t the future; it’s the present and the way for hundreds of thousands of people to enjoy movies and culture. The Internet is the salvation of our cinema.

Web surfers don’t like to be called that; they’re actually people, the public. The public that we have lost because they don’t go to the movies anymore because they spend their time sitting in front of a computer screen. Change is needed to come up with a new model for the film business. We have a moral responsibility to the public. We make movies because citizens allow us to make them and we owe them respect and our thank you.

I want to say goodbye in my last ceremony as president by reminding those present and the nominees that there’s nothing better than to be free to create. We must be up to this privilege that society offers us. If we want them to respect us, we must respect them first. I want to say something to the next president of the Academy – and I don’t know yet who that is: these have been the happiest two years of my life. I’ve looked at problems through other points of view and what’s more important, my friends: twenty-five very good years have passed; but many more await us and I’m sure that they’ll be the best.

Best Editing
Alejandro Lázaro for The Last Circus.
Stephen Mirrione for Biutiful.
* Rodrigo Cortés for Buried.
Ángel Hernández Zoido for Even the Rain.

Best Score
Roque Baños for The Last Circus.
Gustavo Santaolalla for Biutiful.
Víctor Reyes for Buried.
* Alberto Iglesias for Even the Rain.

Best Make-Up and Hair
* The Last Circus.
Lope.
Black Bread.
Even the Rain.

Note: Although Alt Film Guide avoids linking to the frequently unreliable Wikipedia, its Sinde Law page offers the most comprehensive history that I could find about Spain’s controversial anti-online piracy law. 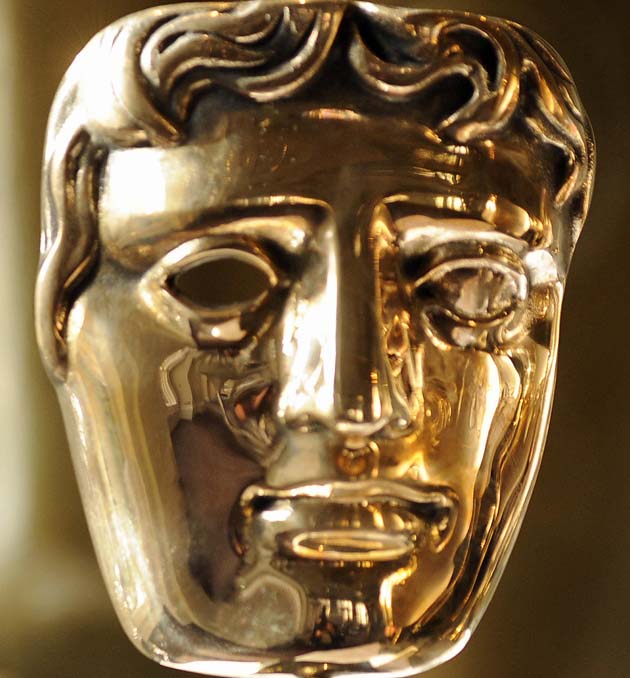 The 2011 British Academy of Film and Television Arts Awards ceremony, often referred to as the BAFTA Awards or simply the Baftas (sometimes in caps, BAFTAs), is currently taking place in London.

Hosted by Jonathan Ross, the 2011 Baftas will be broadcast (two-hour tape delay) from London’s Royal Opera House on BBC 1.

In the United States, you can watch the Bafta ceremony via BBC America beginning at 3 p.m. ET.

Protesters against Spain’s new anti-piracy law are outside the Teatro Real. Right-wingers in the United States may call Wikileaks a “terrorist” organization, but many around the world think otherwise.

Thanks to Wikileaks, Spaniards have discovered that their new anti-piracy law – a.k.a. the Sinde Law, as it was proposed by Minister of Culture Ángeles González Sinde – seems to be the result of pressure from the U.S. government, itself working as an agent for the Hollywood majors and top record labels. Many perceive the Sinde Law not as an attack on piracy, but as an attack on the Free Internet.

Javier Bardem, who defended the law in the Madrid daily El Pais, received some boos upon his red carpet arrival. But that was nothing compared to the chorus of boos and “Out! Out!” that greeted the Sinde Law author – or rather, front person.

Thanks Cris. I kept thinking, “Why Santa Claus…??”