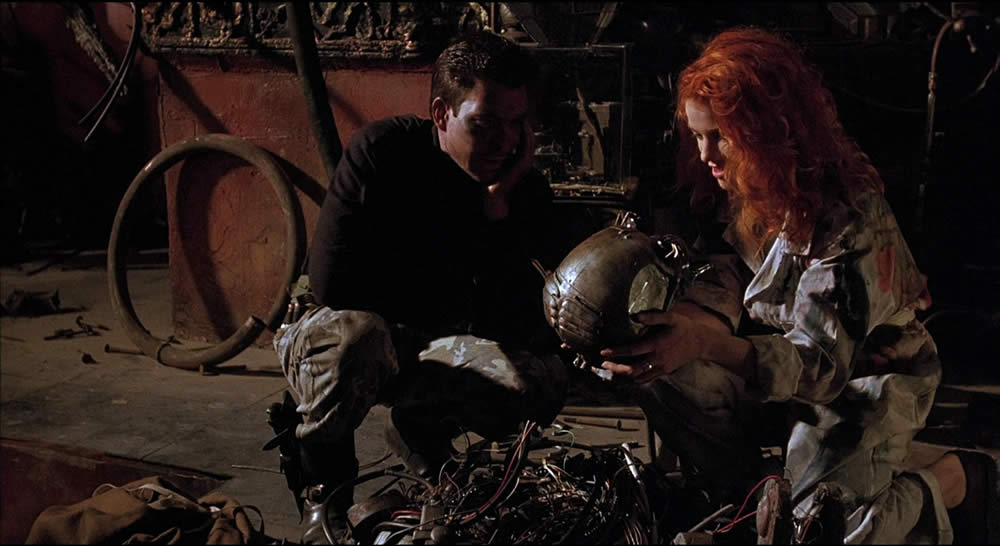 What did you get your sweetie for Christmas?

Mo (Dylan McDermott), a Marine just barely scratching a living out of the post-nuke wasteland of Richard Stanley’s Hardware, valiantly favors the thoughtful approach over blind expense. For only a pittance – “fifty” of whatever-the-official-currency-in-this-particular-dystopia-is – he buys a bag of disassembled robot fragments off of a junk-collecting drifter to give to his shut-in sculptor girlfriend Jill (Stacey Travis).

This turns out to be just what her latest work-in-progress needs and, after a bit of welding and painting, she builds the discarded parts – most strikingly, the skull-like headpiece – into a twisted, industrial-looking piece that appears to have been inspired by the likes of Mark Pauline and his Survival Research Labs.

Only later, after he has left Jill alone in her apartment, does Mark discover that what he thought was harmless mechanical junk is actually pieces of a military robot known as the MARK 13. While Jill sleeps, the machine reactivates, rebuilds itself from bits of mechanical detritus strewn around her place, and embarks on a killing spree in her building. Can Mo make it back to her place in time to save her?

I was a 14-year-old Fangoria reader during Hardware’s limited theatrical release in 1990. It generated a fair amount of buzz at the time due to its admirably grisly violence – I seem to recall that it was threatened with the then-new NC-17 rating because of this – but it was also being talked about, I think, because it was very consciously following stylistic and thematic paths that had been cut by some of the great sci-fi films of the 1980s, most obviously The Terminator, RoboCop, Blade Runner, and Brazil.

Alas, Hardware can’t quite navigate out of the generic wilderness as successfully as those films did. While all of these movies are “about” technology to one degree or another, the older films have a much more nuanced view of the matter, seeing the advance of science and the rise of better (and, indeed, smarter) machines as having as much to do with humanity’s liberation as its enslavement.

Not so for Hardware, in which nature and even biology itself are in peril at every turn. As if a killer robot on the loose wasn’t bad enough, there are vague mentions of a state-sponsored effort to end human reproduction, and the only sex scene in the whole film is filtered through the computer-screen p.o.v. of not only the lurking machine, but also a sweaty peeping tom’s infrared telescope lens.

Again, the Terminator and RoboCop films are much more inventive about this sort of thing. There, the robot’s-eye-view was an opportunity for inventive staging and, in a kind of human gesture that Hardware isn’t interested in, the butt of jokes.

Hardware’s luddism would be easier to take if it were expressed in a cinematically interesting way, but it is not to be. Stanley actually seems like he might have a good eye, but doesn’t dare to give in to it, lest he disrupt the grim nature of the enterprise. Thus, everything has a kind of burnt orange tint, and the overall darkness of the frame isn’t used to create suspense, it just makes it hard to see what’s going on. Unfortunately, this dark and monochromatic look would become trendy among Hollywood cinematographers over the next decade and a half.

The only scene with any visual appeal in Hardware is one near the end of the film, which takes the perspective of a character who has been mortally wounded by the MARK 13. Cutting together the leering “face” of the machine, AIP-style hallucinations, Hindu religious icons and (for some reason) images of the Mandelbrot set, Stanley finally gives the viewer something to look at.

It’s sadly telling, though, that Stanley’s talents are only sufficiently stimulated by the experience of one’s own demise, while everything else is relegated to clay-like smudginess. This realization is even more depressing if contrasted with the ruined sex scene I mentioned earlier; so much for the triumph of Eros over Thanatos.

Technology’s menacing of humanity is Hardware’s ostensible concern; unfortunately, Stanley doesn’t seem too interested in humanity in its un-menaced state. The only means this film offers of transcending the brutalizing modern world is death, a solution which, if you ask me, leaves a lot to be desired.

But Stanley blocks all other possible avenues. We’ve already gone over sex; meanwhile, politics and religion are represented as a sick joke and a personal eccentricity, respectively. Art doesn’t seem to offer much hope either – despite its incorporation into the sculpture, the robot remains true to its deadly mission, Jill’s aesthetic labor having failed to alter its lethal nature in any way.

It’s not often that you run into a movie – a work of art, mind you – that proclaims the futility of the artistic impulse as straightforwardly as this one does, but that’s Hardware for you. Perhaps the sculptress herself, explaining her work to Mo, says it all: “It’s not for you. It’s not for anybody.”

Despite my own lack of enthusiasm for the film, Severin’s new two-disc set is an impressive one. Hardware looks and sounds here as good as the DVD format allows. The second disc is crammed with worthy extras, including the obligatory documentary and some of Stanley’s short films. Most interesting is his Incidents in an Expanding Universe, an early 8mm first draft of Hardware, which contains some of the motifs and plot points of the later film, but is very much its own creature.